Tens of thousands of Bahrainis poured into streets Tuesday in participation of the funeral of the martyr Mohammed Ali Ahmed Mushaima. 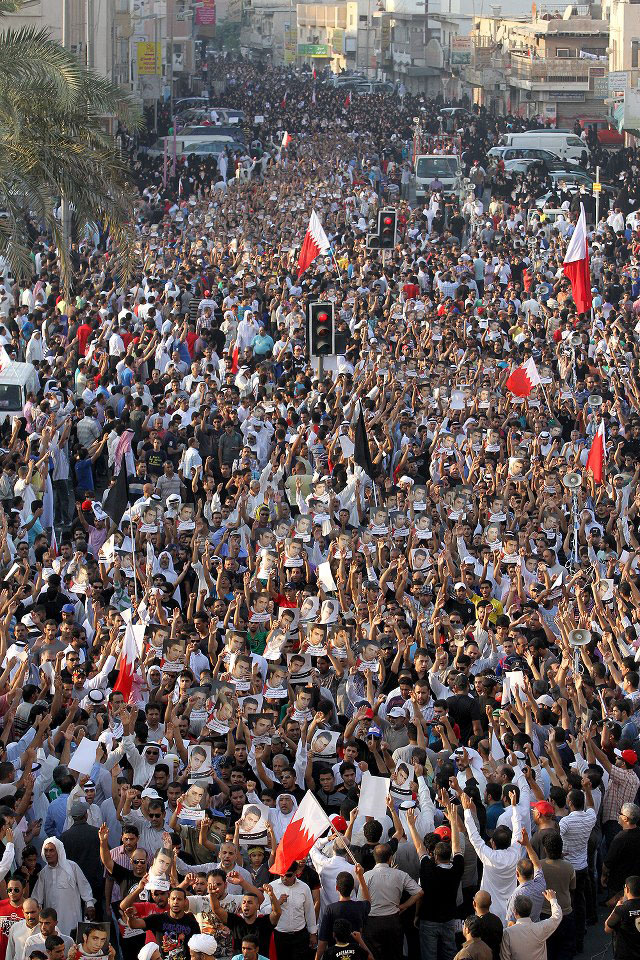 Bahrain's Information Authority said he had been in hospital since August, and died of complications from sickle cell disease.
But opposition activists accused the authorities of causing the 23-year-old's death by denying him proper treatment.

"Due to his medical condition, his lawyer had tried more than once ... to ensure adequate medical attention for him, but the prison authorities failed to provide such attention," said Mohammed al-Maskati, head of the Bahrain Youth Society for Human Rights.

Mushaima was jailed for seven years in March 2011 for "vandalism, rioting, assaulting a police officer and resisting arrest", one of hundreds of people who were arrested in weeks of mass protests.
Meanwhile, news agencies reported that clashes erupted afterwards when police stopped hundreds of people trying to participate in the funeral.
Separately, activists said six Bahraini medics had been re-arrested on Tuesday, a day after losing appeals against jail terms ranging from one month to five years for their role in the pro-democracy protests.
The medics were freed from detention last year after an outcry over allegations of torture.
Ali al-Ekry, former senior surgeon at the Salmaniya hospital in Manama, was sentenced in June to five years in jail. Eight other medics received prison sentences ranging from one month to three years, and nine people were acquitted.

The World Medical Association, a confederation of 100 national medical associations, said the verdicts were "unacceptable" and urged Bahrain to drop the sentences.

Amnesty said it considered the jailed medics prisoners of conscience.
"Despite the government's claims that the medics committed a criminal offence, Amnesty International believes they have been jailed solely for peacefully exercising their legitimate rights to freedom of expression, association and assembly," said Ann Harrison, program director for the Middle East and North Africa at Amnesty International.