Syrian Foreign Ministry spokesman, Jihad al-Maqdisi, stressed what happened in Treimseh village in Hama province was not a massacre but a military operation and armed clashes between the army forces and rebels.

In a press conference held on Sunday, al-Maqdisi denied that the army forces used heavy weapons upon entering the village in response to the resident's pleads.
Al-Maqdisi noted that "Treimseh is a small village of 1 km2," dismissing tendentious media claims that the army used 150 tanks in such a narrow space as "belittling of people's minds." 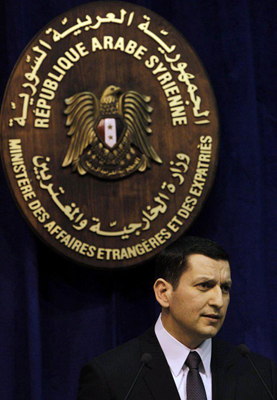 The Foreign Ministry spokesman affirmed that the clashes with the gunmen inside Treimseh lasted only a few hours, reiterating that only five buildings were exposed to fire and that the army forces did not use any aircrafts, helicopters, tanks or artillery.
"The timing of claims on the use of heavy weapons is related to what is going on and the debate underway at the Security Council because they want an additional vitamin to get the better of the Russian prudent endeavors at the Council," said al-Maqdisi.
He made it clear that "what really happened was not an army attack on safe civilians but a military operation and armed clashes the army and law enforcement forces."

He added that those groups have discarded all the initiatives sponsored by Annan to establish calm and move ahead with the political solution in Syria.
"Had it been a massacre, or had it not been a matter of defending the citizens and confronting armed groups that don't believe in the political solution, we wouldn't have allowed the mission to go there," added al-Maqdisi.

He referred to the statement of the UNSMIS spokesperson in which she said that the operation carried out by the Syrian Army seemingly targeted deserters' houses and places for armed opposition members, and that the observers will return to the village on Sunday to continue their observations and investigations.
Al-Maqdisi indicated to articles published by New York Times and the French News Agency (AFP) in addition to the statements made by the UN observers, which all confirm that the clashes took place between the army forces and armed groups.
He added that 37 gunmen and 2 civilians were killed in the operation according to reliable sources and "the testimony of a venerable man who participated in burying the dead."

Al-Maqdisi pointed out that the number of documented violations of Annan's plan that have been committed by the armed terrorist groups reached 10500.
On the UN Secretary General's statements asking China to pressure on Syria, al-Maqdisi said, "Ban Ki-moon is the UN Secretary General with whom all international pressures rest, so it is natural that his statements would be unfriendly and not based on the reality."