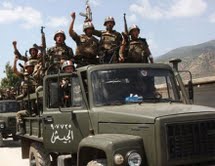 Syrian authorities announced Friday that "Syrian forces have killed several members of armed terrorist groups fighting against the government and arrested many others in the Damascus suburb of Douma." 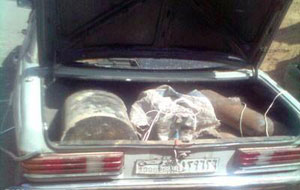 An official source informed SANA that "the clash with terrorists left buildings used by the terrorist groups demolished."
"The competent authorities discovered chambers that the terrorists used for torturing abducted citizens," he added.
According to the official state agency, "the competent authorities also discovered field hospitals equipped with medical devices stolen from medical centers that the rebels raided."


The source said that "among the killed terrorists were the terrorists Hisham Khabiyeh, Rateb Khabiyeh, and Ahmad al-Qassir."
In parallel, media reports mentioned that "army members clashed with an armed terrorist group driving a Pick-up truck equipped with a machinegun in Deir Ezzor."

A source in the governorate told SANA reporter that the clash in Bour Said neighborhood in the city left the car destroyed, adding that all the terrorists inside were killed.

Similarly, the army men arrested ringleaders of armed groups in Hama, raided their hideouts, and confiscated a big quantity of weapons.

An official source told SANA reporter that "Israeli"-made grenades were among the confiscated weapons. An explosive charge went off in a store of weapons used by terrorists for manufacturing explosives in al-Qarabis neighborhood in Homs, setting the store ablaze. All the terrorists inside were killed.
"The competent authorities killed a leader of an armed group and a number of rebels during a clash in Joret al-Shayyah neighborhood in Homs," the source added.