Head of the Free Patriotic Movement Gen. Michel Aoun assured that an impending visit to Lebanon by the US Assistant Secretary of State for Near Eastern Affairs Jeffrey Feltman aims at supporting corruption.

"Feltman is coming [only] to support the corruption which he had upheld throughout his presence in Lebanon," the Head of the Change and Reform bloc said Monday, following a bloc's meeting in Rabieh. 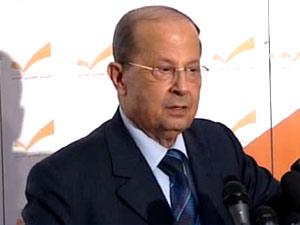 Jeffrey Feltman, who served as the US Ambassador to Lebanon from 2004 till 2008, is expected to arrive to Lebanon on Wednesday on a two-day visit.
Following the Rabieh meeting, Aoun said that the simmering issue of extra-budgetary spending is an item that is at the core of sharp differences among the components of the Lebanese political corps.
He highlighted the necessity for the Lebanese President to sign the related decree, which he termed as "morally binding" for him.
Besides, Aoun rebuked a fresh incident off the northern coast, whereby a Sierra Leonean-flagged commercial ship carrying weapons to Syria was intercepted by the Lebanese Army in Salaata.
Three containers with a large quantity of assorted arms as well as heavy, medium, and light ammunition were confiscated, a communique by the Army indicated on Saturday.
"This is an attack on Lebanon, and a moral attack through using the Lebanese territories to dispatch weapons to a brother country," he said, adding it is also an attack on neighboring Syria.

On a different note, Aoun renewed calls to adopt proportionality with one single district as a basis for the looming 2013 legislative polls, namely amid spiraling strain amongst feudal parties over what each sees as best electoral law.
A proportionality-based law that would ensure a more effective representation of Lebanese voters than is provided by the current winner-takes-all 1960 system in which an electoral list that receives at least 51% of the votes wins all the seats in a district.