News during the last couple of weeks has rumbled in to shake an already rickety balance of world order. Perhaps one of the most disturbing images accompanying those headlines, though, was not that of more bruised and bulleted bodies. Rather, the image was of what the Associated Press termed (*1) a ‘jubilant crowd'. As though they had just won the World Cup Final, Americans waved flags as they sang and chanted their patriotic celebration. 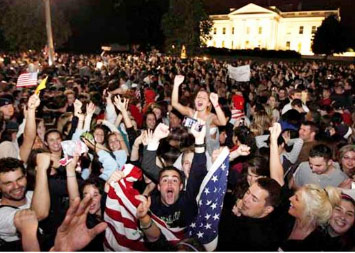 Osama Bin Laden, they had just been told, had been shot dead. After nearly a decade-long manhunt, he had finally been pounced upon in Pakistan. The crowd cheered. And when President Obama made (*2)the official announcement, he coaxed the nation to cheer the same; he concluded by quoting the American pledge of allegiance:

‘Let us remember that we can do these things not just because of wealth or power, but because of who we are: one nation, under God, indivisible, with liberty and justice for all'.
‘Indivisible'. In this one word lies the notion that has fed American policy for many, many years: united we stand-divided they fall.

This is the disturbing aspect about the spectacle that accompanied a political assassination. The power that drives the ruin of lives has been reduced to a sports-style competition. The longstanding game strategy has become brazen: (1) unite ourselves to challenge a common enemy-of-the-day, (2) keep all designated enemies splintered with hostilities, and then (3) exploit the resulting instability. A 2005 report called ‘Dividing Our Enemies' (*3), a report produced by the US Special Operations Command, admits frankly: ‘exploiting the rivalries or animosities among the insurgent bands clearly meets our goals'.


By way of example, just last month President Obama gave(*4) a speech stressing the importance of strengthening the nation by all working together. Meanwhile, American leaders were bristling at the renewed rumours of an impending reconciliation between the Fatah and Hamas parties of Palestine. They then promptly issued (*5)threats to cut off American support to the Palestinians should the Palestinians choose to work together themselves.
Within days, twenty-seven US Senators formerly demanded (*6)that President Obama ‘stand by its refusal to work with any Palestinian government that includes Hamas'. The Senators declared (*7):
‘It is imperative for you [President Obama] to make clear to President Abbas that Palestinian Authority participation in a unity government with an unreformed Hamas will jeopardize its relationship with the United States, including its receipt of U.S. aid'.


Why had political support and financial aid been offered in the first place? Clearly not to facilitate a stable government of national unity. Repeatedly over the years, whenever the Palestinians have expressed their own unity, they have been rebuked for seeking their own terms of agreement. Only those Palestinians who were willing to abide by the terms of the Western "Israeli" Alliance were welcome.


This American pattern of provoking and prolonging internal hostilities amongst strategically targeted populations has been played out time and again in the Middle East. With protecting its "Israeli" project in the forefront, successive American governments have spared no effort to tame the Palestinians and Lebanese. Being unprocurable, Lebanon was played. From the 1950's onward, relentless political manipulation and violent interference ensued.


Just as they had with the Palestinians, American governments offered political support and financial aid to select Lebanese-but only as a means of leverage. In the run-up to the Lebanese national election of 2009, for example, US Vice President Biden warned(*8) that his government would assess its willingness to continue aid to Lebanon ‘based on the composition of the new [Lebanese] government and the policies it advocates'. Years of open hostility toward Lebanese parties supportive of the Resistance clarified beyond any doubt what he meant.


Yet again in January 2011, the US cautioned (*9) that it ‘would have great concerns about a government within which Hizbullah plays a leading role' and warned once again it could cut off aid, that tantalising carrot dangled in the faces of those pursued as strategic allies. A game played by house rules. But when the so-called assistance is bartered not for peace and stability, but solely for the political gain of the lender, then the role of the international community has gone terribly wrong.


In similar fashion, the various calls for reform we are witnessing today in the Arab world are calls for integrity. They are resistance to a state divided from its people, resistance to a people divided from each other, and resistance to foreign states imposing their own agendas. In particular, the eagerness of the Palestinian and Lebanese peoples to achieve national unity is a key element of this developing global balance. Yet their eagerness has not been cheered; instead, it has been routinely met with stern disapproval from America-the self-proclaimed champion of united patriotism.


The concept of national unity, whether Arab or Western, should guide and grow with its people. It should be built on what is right about its own people-and not on what it perceives to be wrong about another. If we are ever to establish peaceful relations, the role of the international community is to be an honest broker in the pursuit of mutual benefit. When lives are at stake, it is simply not a game.

Brenda Heard is Founder of Friends of Lebanon, London. Details of the Lebanese Resistance & Liberation Day event in London, 25 May, ‘Reform as Resistance: emerging independence within the Arab world' can be found here.