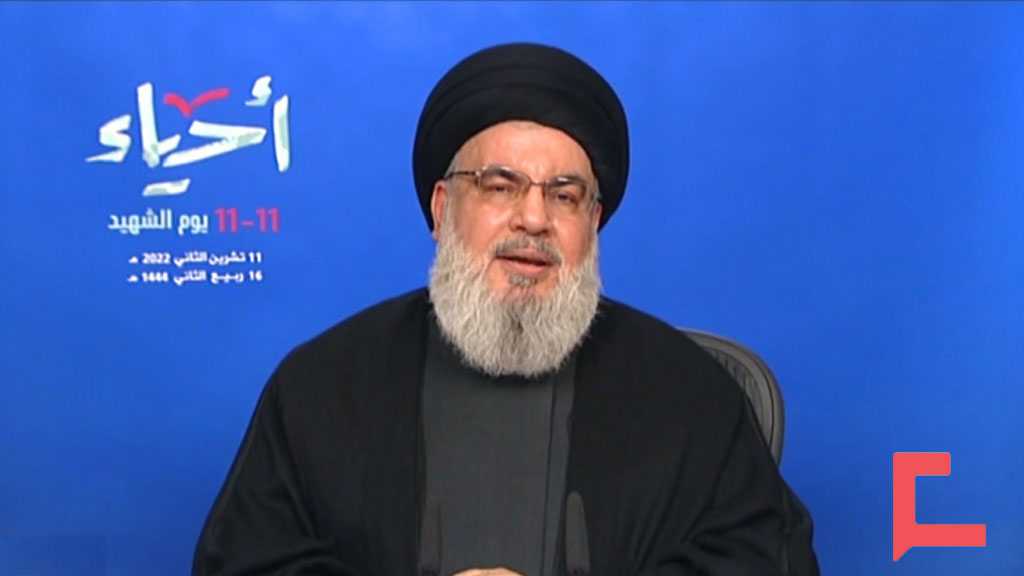 Sayyed Nasrallah stressed that the US administration bans aid from coming to Lebanon, describing it as a plague, curse, and epidemic that always infiltrates since its greed and goals are endless.

As he emphasized that the power of Lebanon is in its strengths, represents by the equation of the Army, people, and Resistance, His Eminence pointed to the indifference towards the results of the ‘Israeli’ entity’s elections, given that whatever government has been brought to power, each of them is criminal, usurping, and occupying.

On the level of Lebanon’s presidential void, the Hezbollah leader affirmed that the Resistance in Lebanon neither needs a cover nor a protection, and that it is its natural right, like its audience, to have a president of the republic that doesn’t stab its back, conspire against it, or sell it in exchange for cash.

As he harbored hopes that yet another and bigger self-sacrifice operation would take place [against ‘Israel’] through any resistance faction, Sayyed Nasrallah termed the Martyr’s Day, from Hezbollah’s viewpoint, as a day for all martyrs within the Axis of Resistance in this region.

“All martyrs in Bahrain, Yemen, Iran, Palestine and the entire regions are our martyrs,” His Eminence noted, affirming that Hezbollah’s path didn’t stop sacrificing martyrs over the past 40 years, some 98% of which are from the young generations.

The Hezbollah leader praised the major role of the families of the martyrs in the continuity of the path of Resistance over the past 40 years, many of which, Sayyed Nasrallah said, have encouraged their children to take part in this battle.

“The sons of our martyrs have turned to be resistance fighters and this is thanks to the commitment of their families to resisting until victory,” His Eminence added, “We value the martyrs who sacrificed their lives for our sanctities, nations, freedom, dignity, security, and pride.”

As for the martyrs whose bodies have not been recovered yet, Sayyed Nasrallah said: We have lost bodies of martyrs, but just like we didn’t leave any detainee in the enemy’s prisons, we never abandon the bodies of our martyrs and we seek to figure out their fate.

Elaborating more on the continuity of the path of Resistance among the successive generations, the Hezbollah leader mentioned that there are many cases in which the son, the father, and the grandfather are martyred. “The enemy bets on the second and third generations’ abandoning of the resistance, and that is why it targets them to spoil them through the high technologies and change their beliefs,” Sayyed Nasrallah explained, warning of the grave danger of such a practice.

“The path of our martyrs, with its successive generations, cements our enemy’s failure to achieve its goals, and the enemy was surprised in the occupied Palestine when its bet on the generations and making them change their principles failed,” Sayyed Nasrallah underscored.

The Lebanese Resistance leader hailed Palestinian Martyr Uday Tamimi and his brothers of the resistance fighters who cemented the failure of the enemy’s bet on changing their plots, advising the US and ‘Israel’ not to bet on the current and future generations as they have the same ember of resistance and confrontation.

Moving to the ‘Israeli’ occupation entity’s latest elections, Sayyed Nasrallah explained that for Hezbollah, all ‘Israeli’ governments are criminal no matter who wins in the Knesset elections; the results mean nothing to us as all ‘Israelis’ are alike on the level of criminality.

He noted, however, that the results may have dangerous repercussions inside Palestine because the power will be in the hands of foolish people.

As for the US midterm elections, the Hezbollah leader also considered that the results won’t make any difference as the US, whether Republican or Democrat, has the same face.

With respect to the remarks made by the the US Assistance Secretary of State about Hezbollah and Lebanon, Sayyed Nasrallah commented that it is the US that is the source of the curse, the plague, and the epidemic, and it is Hezbollah that has eradicated the US curse from Lebanon and killed this plague.

“The US infiltrates again to any place where it can commit massacres after our people confronted its curse and plague. The US has come with the Takfiri terrorist plague to Lebanon, which Hezbollah has faced and eradicated. The US ran the chaos in Lebanon in 2019 by supporting the protests after all its conspiracies have failed. It sponsored the October 2019 chaos and planted a curse that Hezbollah and all the honorable sides have faced,” His Eminence went on to detail.

“The US siege on Lebanon continues by forbidding any investment or economic aid to the country. The US bans any country from helping Lebanon in its economic crisis, which itself is a curse and a plague,” Sayyed Nasrallah added, questioning the truth whether Lebanon dares to accept the new Russian aid or will it submit to the US threats?

On the contrary, he pointed out that Iran has approved the Lebanese delegation’s demand that visited it to help the country deal with its electricity crisis, but the US curse banned this aid.

Additionally, Sayyed Nasrallah made clear that Washington didn’t finalize the maritime boundary deal for Lebanon’s sake, but to avoid a war in the region since its priorities now are somewhere else.

However, Lebanon was able to achieve all of the Lebanese state’s demands in the maritime boundary delimitation file with its power and through seizing the historic moment, Sayyed Nasrallah explained.

Moreover, the US is imposing the Caesar Act, and is preventing Lebanon from receiving both the Egyptian gas and the Jordanian electricity, His Eminence underlined, recalling that the Americans who failed to overthrow Syria via the terrorists and funding Takfirism, now want to bring it to its knees it through famine and cold.

With respect to the recent riot that took place in some areas across the Islamic Republic, Sayyed Nasrallah assured that Iran has decisively emerged victorious against the American-‘Israeli’-Western seditious conspiracy.

Elsewhere in his speech, the Hezbollah leader called on the Lebanese people not to surrender to the US plague and epidemic which only seeks to protect ‘Israel’.

Regarding the presidential issue, Sayyed Nasrallah didn’t accuse any side that it wants presidential void in Lebanon, and insisted that Hezbollah wants electing a president as soon as possible.

“The presidential void reflects on all levels at home and this post couldn’t be filled by anyone,” Sayyed Nasrallah noted, drawing attention also to that “The Lebanese presidency is a sensitive and critical issue that would have impacts on the next six years and the years that follow.”

Additionally, Sayyed Nasrallah referred to the Resistance as being among the most important elements of power in Lebanon which is mainly targeted by the Americans who are still seeking chaos in the country.

Moreover, the US embassy interferes in the smallest details of the Lebanese cabinet.

Before concluding his speech, Sayyed Nasrallah didn’t conceal that the Resistance, as a major part of the Lebanese people, wants a ‘reassuring’ and daring president who doesn’t fear or concede, and who prioritizes the national interest, a president who can’t be purchased by cash.

“Had the state’s power been in Hezbollah’s hands as they claim, at least the electricity would have returned to Lebanon,” Sayyed Nasrallah mocked the false claims about the Resistance group’s hold of the country’s power.

“We don’t want a president who backs or protects the resistance as it doesn’t need protection, we only need a president who doesn’t stab it in its back,” His Eminence reiterated.

“The Lebanese have no choice but to hold a dialogue to reach the election of the president,” Sayyed Nasrallah advised the people, “Had you wanted a strong Lebanon that is capable of extracting its gas, you have to bring a daring president who doesn’t stab the resistance in its back.” 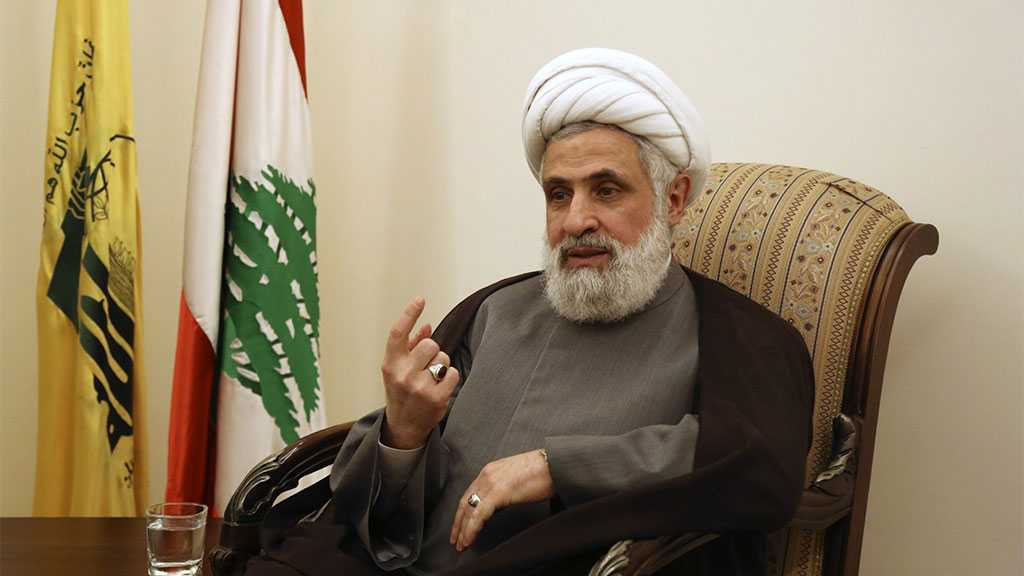 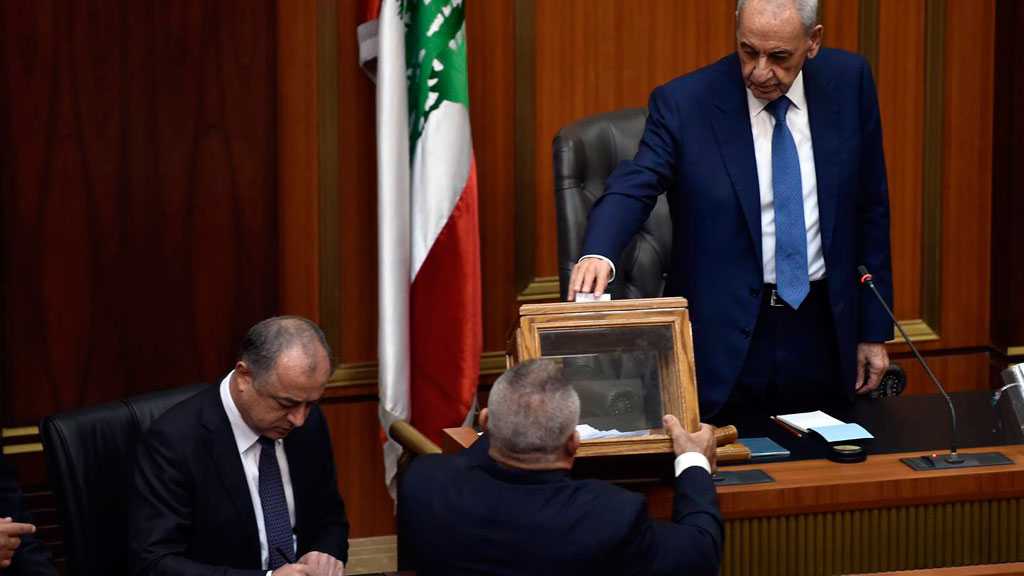 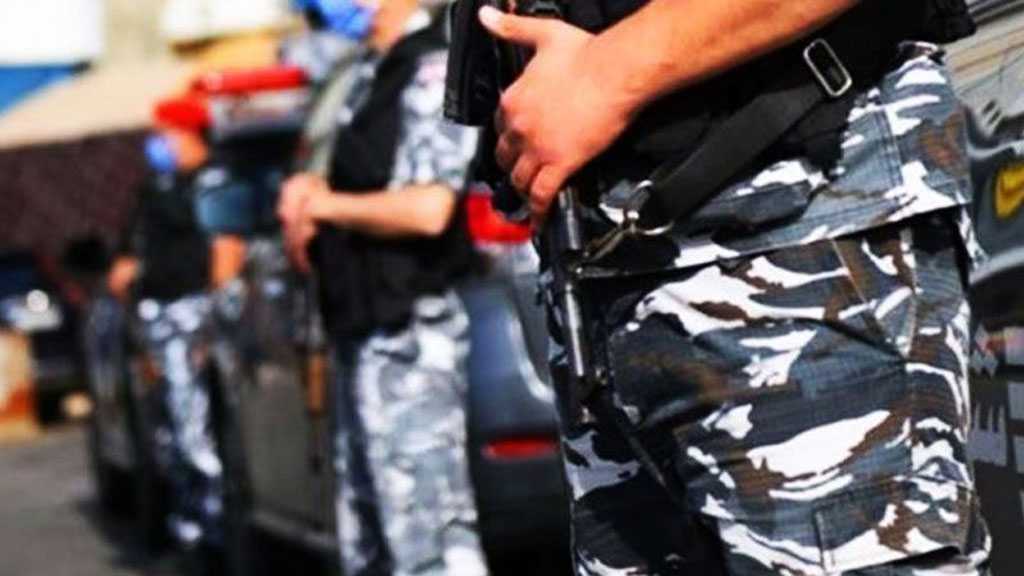 Palestinian Prisoners’ Information Office: Audio Message from Female Detainees in Damon Prison to Be Released Soon
Salami: The war continues on various levels, from the military arena to the cultural, economic and political ones
Salami: So far, we have managed to overcome most of the enemy’s threats, but we still have responsibilities in this field. However, we aren’t worried.