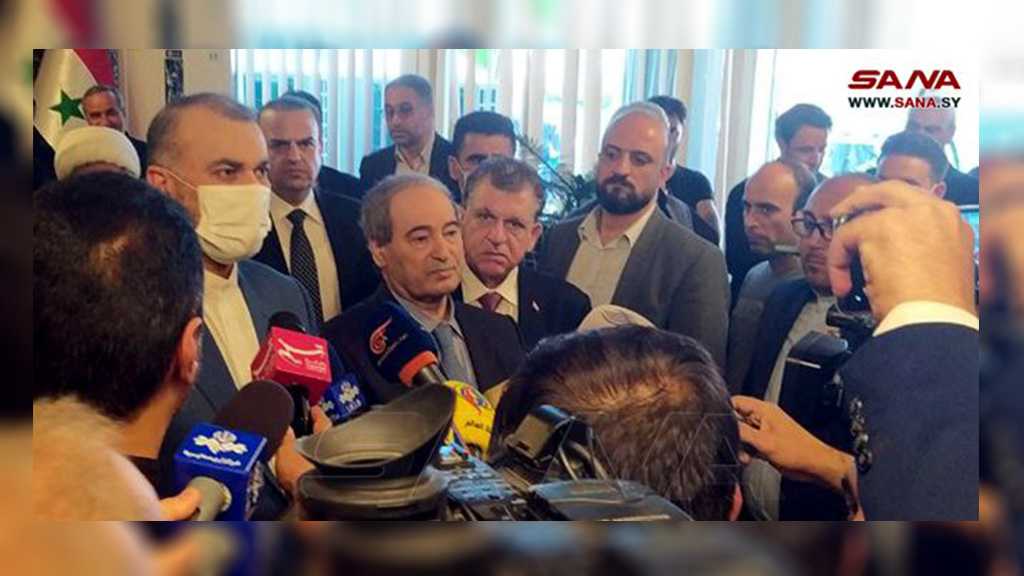 Mikdad in a press statement described the visit of Amir Abdollahian as very important that comes after a lot of local, regional and international developments.

“We stand by Iran in the nuclear file and we support its stance in this regard,” Mikdad said.

For his part, Amir Abdollahian said that the latest visit of President Bashar al-Assad to Tehran is a turning point in the relations between the two countries, adding “We have gone into new stage in all domains.”

As for the “Israeli” aggression today, Amir Abdollahian said “Iran condemns the Zionist aggression on southern Tartous,” adding that “the Zionist entity, through its aggressions, tries to show Damascus as unsafe city to obstruct the return of the displaced.”

Speaking to reporters before leaving Tehran for Damascus on Saturday morning, Hossein Amir Abdollahian said it is necessary to hold a series of consultations with the Syrian officials following a trip he made to Ankara a few days ago.

Considering the regional developments, the Islamic Republic of Iran should try to maintain its constructive role and prevent new crises in the region, he said.

The foreign minister said one of the main objectives of his trip to Syria is to take steps for the establishment of regional peace and security between Syria and Turkey, highlighting Iran’s important relations with the both countries.

Amir Abdollahian also noted that he will hold talks about Tehran’s relations with Damascus and the regional and international issues in meetings with Syria’s president, foreign minister and other high-ranking officials.

Amir Abdollahian visited Turkey on June 27 for the first time in his capacity as the foreign minister of Iran and held high-profile talks in Ankara.