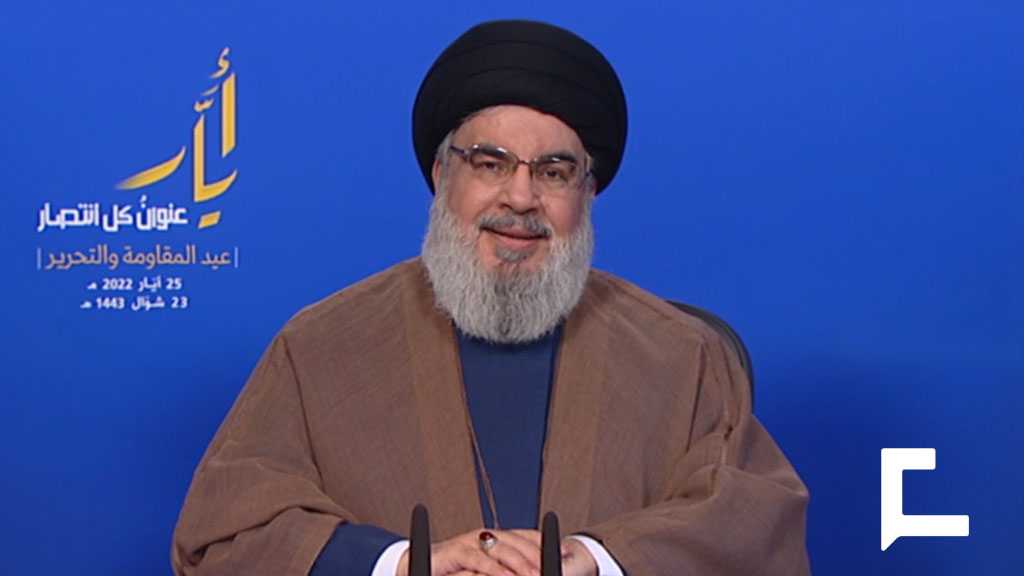 Sayyed Nasrallah commenced his speech by congratulating everybody on this very happy day, May 25th, which is celebrated as the day when Lebanon was liberated from the ‘Israeli’ occupation.

“We thank Allah who guided us to the choice of resistance; we neither waited an Arab regime, nor the United Nations or its Security Council,” the Hezbollah chief underlined in reference to taking the action of resisting the ‘Israeli’ occupiers.

As his eminence thanked all those who sacrificed, from all factions and sects, for what they offered to the resistance, namely the martyrs and their families, he also hailed the wounded fighters on their sacrifices, the detainees who spent long years in the occupation’s prisons, and the resistance men who spent their most beautiful age in the battlefield, as well as the steadfast people in all the Lebanese villages.

In the same part of his speech, Sayyed Nasrallah thanked the Lebanese Army, especially those who served in the late 1990s when the army was in harmony with the resistance upon a political decision, in addition to the Syrian Arab Army, and the Palestinian Resistance factions. The Hezbollah chief didn’t skip the opportunity to praise the resisting presidents of the time of the liberation: President Emile Lahoud, PM Salim al-Hoss, and Speaker Nabih Berri.

Elsewhere in his introduction, Sayyed Nasrallah thanked media outlets that contributed to covering the event of the liberation.

Back to the grounds of the occasion, the resistance leader highlighted that the mujahideen fought the ‘Israeli’ enemy amid an official Arab abandoning of the resistance.

“Syria backed and covered the resistance and Iran supported us since our first days in every possible mean; and the 2000 liberation was not a trip, nor a gift from the West or from the Arab regimes; this liberation costed dearly among the martyrs, the wounded, and the detainees,” his eminence recalled.

Moreover, Sayyed Nasrallah called on recalling during this occasion the Lebanese people’s suffering at the hands of the ‘Israeli’ occupation, and the terrorizing and bombing of towns and villages.

“The new generations must learn the humiliation the people used to suffer on the ‘Israeli’ checkpoints, their suffering behind bars, and the human rights violations; and the Lebanese must learn the true face of this entity that attempts to appear normal and in harmony with the region,” the resistance leader encouraged.

Could those who remain silent towards the decades of occupation and accept the May 17 Agreement be considered sovereign? Sayyed Nasrallah asked, urging people to learn who is the sovereign in Lebanon.

As the Hezbollah leader referred to the achievement of 2000 as the greatest of all achievements in the modern history, he said: “We must shed light on all sacrifices as this victory was not granted but was made instead thanks to the blood, the tears, and the hands carrying the guns [against the enemy].”

Moreover, Sayyed Nasrallah called on shedding light on those who resisted the occupation and exposing those who conspired against their nationals.

“We admit the history of resistance among all sects and factions, and we don’t limit the victory with ourselves,” the resistance leader underlined.

Meanwhile, Sayyed Nasrallah labelled the “Spider’s Web” speech as a one that has engraved a deep scar among the leaders of the ‘Israeli’ entity and its army, leading them to live in a psychological disorder of the entity’s 8th decade, which means their obsession of whether the entity would exist or survive after it passes 80 years since its establishment.

With respect to the participation in the Lebanese ruling system, Sayyed Nasrallah explained that after the victory, Hezbollah didn’t demand an authority, and its current presence in the government aims at protecting the back of the resistance as well as following up the needs of the people.

“The only resistance that achieved victory and didn’t rule [a country] was the Lebanese resistance, namely Hezbollah,” he underscored.

“We weren’t after the authority because it was not the reason we fought for. The resistance fought to liberate the land and free the people, and for the sake of the national dignity,” Sayyed Nasrallah stated, explaining that “What tasked Hezbollah with resisting the occupier is its national, humanitarian, ethical, and religious duties.”

Meanwhile, as he lashed out at some people in Lebanon who don’t consider ‘Israel’ as an enemy, Sayyed Nasrallah made clear that “This resistance, which emerged victorious in 2000, fought amid a Lebanese division about it.”

As he renewed calls for partnership and cooperation from the position of the powerful and the capable, Sayyed Nasrallah warned that the Lebanese state is heading to collapse and its economic problems should be solved for a state to remain before someone calls for disarming the resistance.

“We told them to keep the resistance aside since the peoples’ concerns are more important and the state is heading towards collapse, but they are only busy with the issue of the resistance,” he added.

As his eminence reiterated that Lebanon can be a country that is rich with oil and gas; and extracting them from the sea is very possible and solves Lebanon’s crises, he underlined that this requires a courageous decision.

“Lebanon has a great treasure and wealth of oil and gas in front of which we stand hand-folded while the enemy is making deals to sell the oil.”

Elsewhere in his remarks, Sayyed Nasrallah cautioned that any attack against the holy al-Aqsa Mosque will lead to a huge and undesirable explosion in the region, stressing that the Palestinian resistance decided to respond to any such attack that harms the feelings of all Muslims.

The Hezbollah leader also stressed that the ‘Israeli’ enemy is in crisis as it is suffering from severe internal division; and, in comparison with all previous times, it hasn’t ever been such weak and fragile.

“The enemy’s government shouldn’t take any step whose results would be catastrophic on the ‘temporary entity’s’ existence,” Sayyed Nasrallah said at the end of his speech.