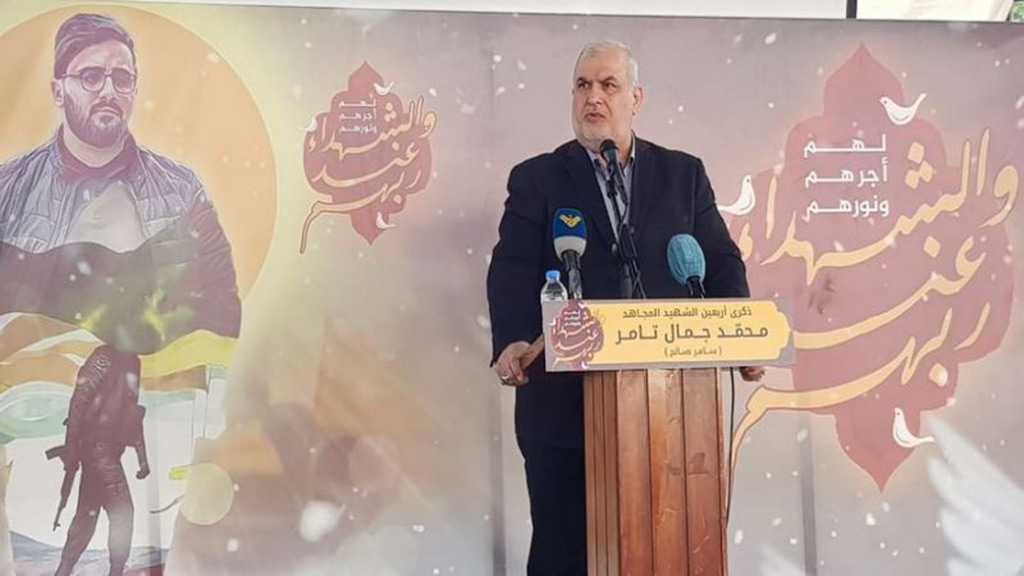 The head of the Loyalty to the Resistance Bloc MP Mohamad Raad said, “We smell a coup against the Taif Agreement. This coup aims at reassuring the ‘Israeli’ enemy that the Lebanese people can't face its aggression, so that it dictates its normalization and authoritarian policies and control even deciding the fate of our gas wealth in our territorial waters, as gas exploration is confined to certain companies of certain countries. Despite all this, we still talk about independence and sovereignty, but we are incapable of building one power facility that supplies Lebanon with power 24/7”.

Raad made the statement during the memorial ceremony held by Hezbollah on the 40th day on the passing of Martyr Muhammad Jamal Tamer.

He added, "Our national currency collapsed because it depends on foreign currency. Tomorrow, our policy will collapse because it also depends on foreign policies. If the Lebanese people want this, it’s up to them, but we are sacrificing our blood and souls to protect those who don't know where there interest is in this period. Is it required that we commit suicide so that others are satisfied? We are keen to preserve the common living in this country; we want it to rule sovereignly and independently, and that its interests are in accordance with the aspirations, will, and national decision”.

"If anyone thinks that the equation has gone wrong and that the power balance became in the interest of the ‘Israeli’ axis and normalization and wants to turn against the Taif, we tell our people to pay attention to this miscalculation because Lebanon has gotten out of the ‘Israeli’ era and will not return to it; as all the methods of force that were used to twist the arm of the Resistance failed, and the sponsors of strife realized that the Resistance benefits from the national consensus on its role in Lebanon. So, let us not allow a faction of the Lebanese to undermine this consensus… The weapon of the Resistance has become on everyone’s lips, and media outlets have been bought in order to promote this issue,” Raad added.

Regarding the Tayouneh crime, Raad said, "What happened is not just a clash between the people of two areas, it's rather a designed and planned aggression in order to cause a strife and to push people to fight among themselves and mess up the whole situation, so that the killer gives his credentials to the people who hired and pay him regionally or internationally”.

Raad concluded saying, “From now on and without wasting time and opportunities, let's figure things out. Don't let anybody drag you to a new civil war in order to impose on you a settlement with new balances of power, as long as people are open to each other and ready for dialogue, and as long as they appreciate their common interests and have no enemies but one enemy, which is still occupying our land”.