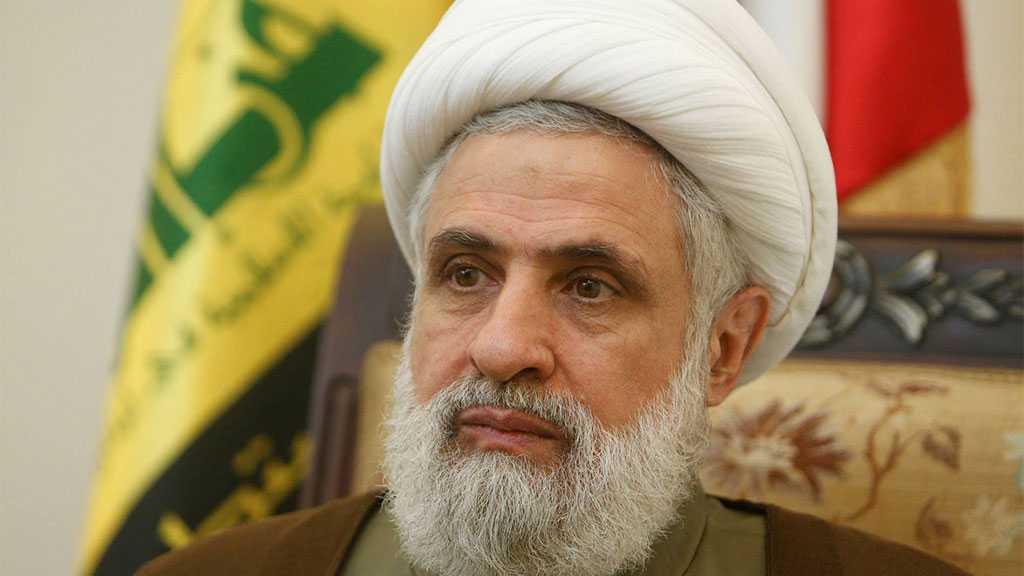 Hezbollah Deputy Secretary General His Eminence Sheikh Naim Qassem asserted that Saudi Arabia is disturbed because it couldn’t dominate the political decision in Lebanon despite the cash it had spent on its allies in Lebanon, pointing out that Saudi Arabia couldn’t put up with its casualties in the region, so its aggression on Lebanon was just a reaction, and that is one of the reasons behind the current crisis in Lebanon.

Sheikh Qassem asserted that the timing of the Saudi aggression on Lebanon is linked to Marib and Riyadh’s terrible loss in Yemen, so that it’s trying to divert attention from the battles there by exercising pressure on Lebanon.

The Hezbollah Deputy Secretary General said that Riyadh should apologize for its unjustified aggression on Lebanon, noting that the kingdom is not doing the right thing because nobody can twist the arm of Hezbollah and the Lebanese people.

“Lebanon is not a scapegoat and it’s challenging Saudi Arabia as an independent country. We won’t accept Saudi Arabia’s interference in the government after all the achievements it has accomplished,” Sheikh Qassem added.

His Eminence also said, “We will not surrender or give up on our dignity to please Saudi Arabia, even if it had practiced aggression on us, and we don’t hold responsibility for anything that happened”, pointing out that “Saudi Arabia might continue its aggression against Lebanon, as it doesn’t have any disciplines. It wants to take revenge, and it has to apologize. If it wants to continue its aggression, it will have more casualties.”

Regarding the Tayouneh Massacre, Sheikh Qassem said that “the US couldn’t achieve its goals in Lebanon despite all its attempts, and it had tried with all the possible means to turn the Lebanese public on Hezbollah but it couldn’t make it.”

He asserted that the discord that was sought in Tayyouneh massacre is an American-Saudi act executed by the Lebanese Forces party, but Hezbollah and Amal Movement have aborted it for the sake of Lebanon, pointing out that the Lebanese Forces is the sole party that receives allocations from Saudi Arabia, and the Americans have tried to integrate the Lebanese Forces members into the “NGO” groups to enhance their image.

Sheikh Qassem also talked about the maritime borders, saying that the Lebanese government is the one who says where our borders are, and Hezbollah doesn’t interfere in that, adding that “we are waiting for the government to finish the demarcation process and the disputed areas.”

He also stressed that “If the government says that the “Israeli” enemy is assaulting a disputed area, we, as a resistance, will do our duty.”

He said that the Hezbollah-Syrian relationship is one that became deep by blood, resistance, and liberation, and that such relationship was never this good in any past period.

His Eminence also said that “many of our Resistance fighters have come back to Lebanon, and the number of fighters that stayed there is related to the situation on the ground”, asserting that “we are ready for any larger or lower presence there depending on the developments.”