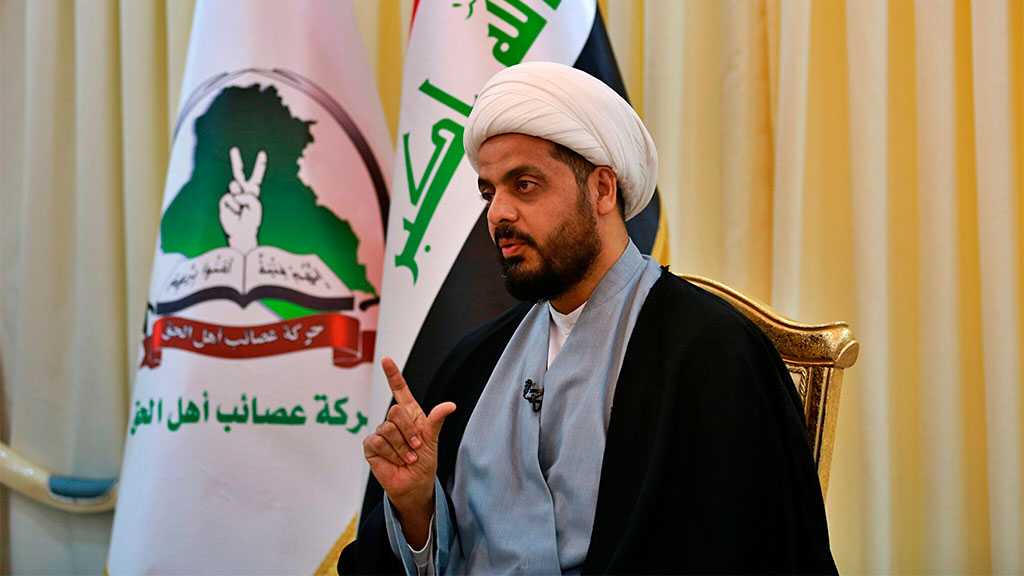 The leader of Iraq’s Asaib Ahl al-Haq resistance group, Sheikh Qais al-Khaazali, raised the alarm at possible electronic vote rigging in the country’s upcoming elections in favor of those seeking normalization with ‘Israel’, saying the United Arab Emirates [UAE] — which has recently made peace with the regime — has the potential to set the stage for such fraud.

“Electronic manipulations lead to fraudulent [election] results, and it is the UAE that has the ability to do so,” al-Khazaali told Beirut-based al-Mayadeen network on Wednesday.

The remarks came days ahead of Iraq’s parliamentary elections, which will decide the 329 members of the Council of Representatives who will, in turn, elect the president and confirm the prime minister.

The vote was originally scheduled to take place next year, but was brought forward in line with the demands of the mass 2019 protests.

“They can manipulate the results easily, and it is in the UAE’s interest that individuals supporting normalization win,” Khazaali said. “Therefore, we will disregard the electronic results if they do not match the manual results.”

Reports published in recent years revealed that the UAE has been using the Zionist entity’s Pegasus spyware in a mass spying program that has targeted its own citizens and international journalists. The UAE rulers have also reportedly used Pegasus against Dubai ruler Sheikh Mohammed bin Rashid al-Maktoum’s daughter as well as his ex-wife.

While enjoying unofficial cooperation with the Tel Aviv regime for years, the UAE finally became the first Arab country in 2020 to openly normalize its ties with the Zionist entity as part of the so-called Abraham Accords brokered by former US President Donald Trump. The other Arab countries that followed suit were Bahrain, Morocco and Sudan.

According to Khazaali, Iraq cannot be a party to the normalization accords with the occupying regime in any form, as the Iraqi law prevents such acts and punishes those who make efforts toward that objective.

“A major conference will be held in Iraq to resist normalization after the elections, and we are at the forefront of the axis resisting the occupation and supporting the Palestinian cause,” he said.

The Asaib leader also said that Iraq is in need of politicians capable of making sovereign decisions by staying away from the dictations of the Americans.

Khazaali added that the withdrawal of American forces from Iraq is inevitable, and that when it happens, it won’t be chaotic like the US withdrawal from Afghanistan, and no coup will take place.

Calls for the expulsion of American forces have soared since the US assassination of Iran’s top anti-terror commander Lieutenant General Qassem Soleimani and Deputy Commander of the Popular Mobilization Units [PMU] Hajj Abu Mahdi al-Muhandis in Baghdad in early 2020.

The PMU, which is composed of dozens of Iraqi resistance groups including the Asaib Ahl al-Haq resistance group, has fought and defeated Daesh [the Arabic acronym for terrorist group ‘ISIS/ISIL’] in recent years. Nevertheless, it has been repeatedly targeted by the US military.

Fed up with the US targeting of the top anti-terror groups on Iraqi soil, the Arab country’s resistance groups have vowed not to lay down their arms or cease their struggle until the expulsion of all American troops from their country.

Iraq is emerging from almost two decades of war and militancy since the 2003 US-led invasion and the 2011 withdrawal, which saw the rise of the Daesh terrorist group.

Khazali said that after the emergence of the Daesh, the Iraqi society found faith in the necessity of keeping the PMU, considering it the safety net capable of preserving Iraq.