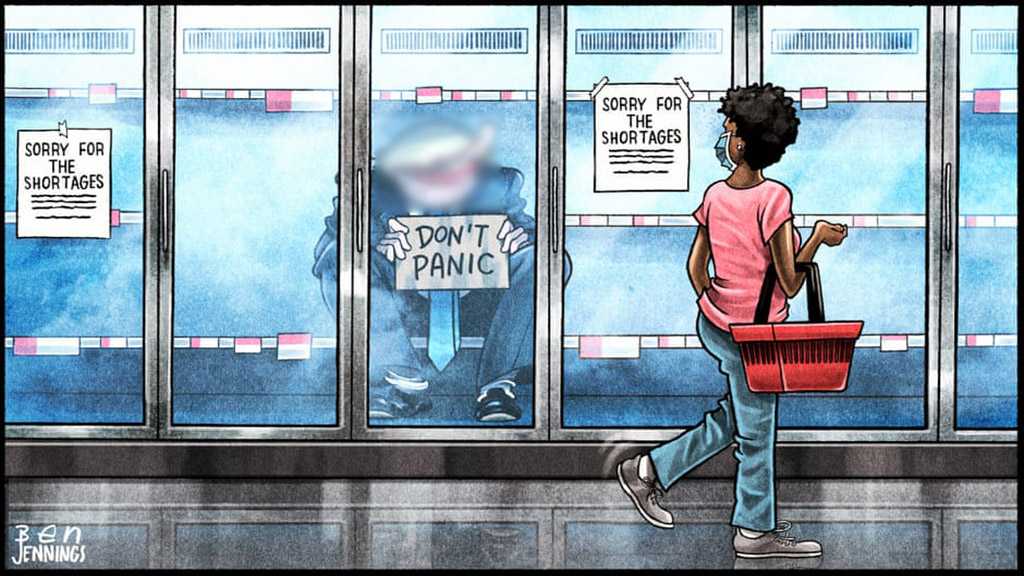 By Matt Stoller, The Guardian

There’s a quiet panic happening in the US economy. Medical labs are running out of supplies like pipettes and petri dishes, summer camps and restaurants are having trouble getting food, and automobile, paint and electronics firms are curtailing production because they can’t get semiconductors. One man told me he couldn’t get a Whopper meal at a Burger King in Florida, as there was a sign saying “Sorry, no French fries with any order. We have no potatoes.”

Imagine that, no French fries in America.

The problem seems to be getting worse, as the shortages pile on top of each other like a snake eating its tail. For instance, the inability to fix trucks means that truck drivers can’t haul boxes of goods, which might actually contain the parts needed to fix the trucks, and so forth.

There are multiple arguments about why the problem is as bad as it is. Everyone agrees that the COVID pandemic and chaotic changes in consumption habits have caused inevitable short-term price hikes and shortages. As people go on vacation less and do outdoor sports more, the price of, say, airline tickets should drop, and the price of bicycles will go up. But some point to government spending and money printing at the Fed as worsening the problem, while others suggest it is temporary and will resolve on its own.

Both arguments have merit. But what we’re experiencing is also the net result of decades of policy choices starting in the 1970s that emphasized consumer sovereignty over citizenship. The consolidation of power into the hands of private equity financiers and monopolists over the last four decades has left us uniquely unprepared to manage a supply shock. Our hyper-efficient globalized supply chain, once romanticized by men like Tom Friedman in The World Is Flat, is the problem. Like the financial system before the 2008 crash, this kind of economic order hides its fragility. It seems to work quite well, until it doesn’t.

The specific policies that led to our supply constrained world are lax antitrust, deregulation of basic infrastructure industries like shipping, railroads and trucking, disinvestment in domestic production, and trade policy emphasizing finance over manufacturing.

Take biopharmaceutical equipment necessary to make vaccines. There’s a shortage of fancy plastic bags that you mix chemicals in to make medicine, which isn’t surprising in a pandemic. But the reason for the shortage isn’t just COVID but a merger wave; over the last 15 years, four firms bought up the biopharmaceutical equipment industry, without any antitrust agency taking meaningful action. These firms now have market power, and dominate their competitors, by ensuring their bags can only interoperate with their specific mixing machines. It’s like not having enough Keurig coffee machine pods; the shortage isn’t the coffee, it’s the artificial bottleneck used to lock in customers.

Another example is railroads. Since deregulation in 1980, Wall Street consolidated 33 firms into just seven. And because the Surface Transportation Board lacks authority, Wall Street-owned railroads cut their workforce by 33% over the last six years, degrading our public shipping capacity. The Union Pacific closed a giant Chicago sorting facility in 2019; it now has so much backed up traffic that it suspended traffic from west coast ports.

Ocean shipping is the same. The 1997 Ocean Shipping Reform Act legalized secret rebates and led to a merger wave. The entire industry has now consolidated globally into three giant alliances that occasionally crash their too-big-to-sail ships into the side of the Suez canal.

Then there’s trucking. Talk to most businesspeople who make or move things and they will complain about the driver shortage. This too is a story of deregulation. In the 1970s, the end of public rate-setting forced trucking firms to compete against each other to offer lower shipping prices. The way they did this was by lowering pay to their drivers. Trucking on a firm-level became unpredictable and financially fragile, so for drivers schedules became unsustainable, even if the pay during boom times could be high. Today, even though pay is going up, the scheduling is crushing drivers. The result is a shortage of truckers.

There are more problems that strike at the heart of our economy. The most obvious is semiconductors. Production of high-end chips has gone offshore to east Asia because of deliberate policy to disinvest in the hard process of making things. In addition, the firm that now controls the industry, Taiwan Semiconductor, holds a near monopoly position with a substantial technological lead and a track record in the 1990s and early 2000s of dumping chips at below cost.

Fortunately, policymakers have noticed. The Federal Reserve’s most recent Beige Book, a report on the economy that is published eight times a year, mentions “shortage” 80 times, and the FTC commissioner, Rohit Chopra, recently pointed out that shortages are slowing the economic recovery. The chair of the Surface Transportation Board, Martin Oberman, noted that railroads stripping down their operations to please Wall Street resulted in container congestions at US ports, a significant chokepoint for imports. And Congress is on the verge of funding tens of billions of dollars to boost domestic semiconductor manufacturing.

Even business leaders are getting it. Chemical firms are asking regulators to act. And at last week’s Intermodal Association of North America’s Intermodal Expo, where representatives from the shipping, rail, ports and drayage industries spoke, one executive said, “Without fear of regulation, I don’t know what will motivate all stakeholders to be at the table.”

It is possible to fix our economy and our supply chains, if we choose to do so. Several times in the 20th century, Congress or the FTC undertook detailed studies of the firms in the economy. We need one of those again. At the same time, Congress should strengthen antitrust law, ban all large mergers, strictly control finance, and re-regulate our transportation industries.

Fundamentally, America has to move away from the goal of seeking cheap stuff made abroad for consumers in a low-wage economy. That means rearranging our hierarchies of power so finance, consulting and capital-light tech leaders became less important than people who know how to make things. The problem we have is shortages, so it’s time to put people in charge who value production.