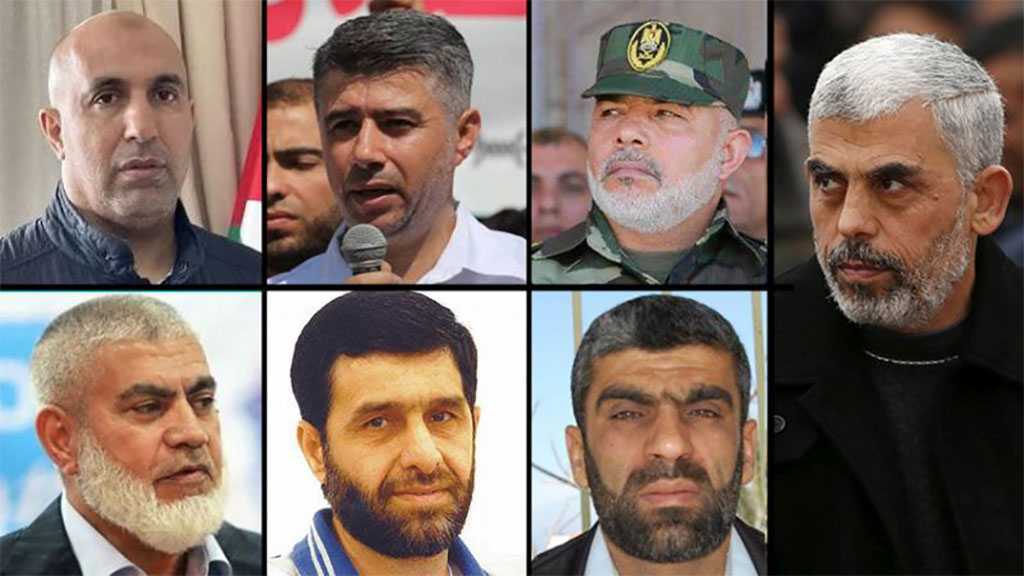 Elior Levi, a Zionist writer in “Yedioth Ahronoth” newspaper, narrated parts of the biography of the seven Palestinian resistance men who regained their freedom in a swap deal with the ‘Israeli’ enemy in 2011.

According to the writer, these seven men turned to a great challenge to the ‘Israeli’ security institution over years, affecting the life of hundreds of thousands of Zionist settlers.

Levi claimed that the seven resistance men are “The main perpetrators of terrorism against “Israel””, saying that they became within ten years the tip of the spear and the military wing of “Hamas”, after they were supposed to put an end to their lives in the ‘Israeli’ prison.

Levi cites the colonel who is the stand-by of doctor Michael Milstein who took charge of the so-called “Presidency of the Palestinian Arena” in the research brigade of the ‘Israeli’ intelligence section during the period of the deal, quoting his saying “Gilad Shalit Prisoner Swap has contributed to the improvement of Hamas’ potentials of decision-making and strengthening ties between its military wing and its strategic [political] wing.” He added that “the entrance of Yehya Al-Sinwar, the leader of Hamas in Gaza Strip, to the ring has made a giant leap for the movement and “contributed to the improvement of its military capabilities and enhancing its status in the Palestinian region, as a part of the group that integrated the military capabilities and the strategic thinking.”

The writer lists the seven main resistance men of the Shalit agreement in Yedioth, talking first about Al-Sinwar, whom he said managed to change the geopolitical situation between Gaza and ‘Israel’, after he had become the strongest figure in Gaza, thanks to his leadership charisma and ability of maneuvering between the political efforts aiming at settlement and achievement of tranquility, and the gradual escalation of Tel Aviv depletion and standing behind the return marches.

“Al-Sinwar is the man behind the improvement of the economic situation in Gaza in the last ten years. But he was never reluctant or afraid of giving up the conveniences offered by ‘Israel’ to relieve the siege for the sake of Al-Quds and launching the “Guard of Fences “[Operation Al-Quds Sword] … He’s just like [His Eminence Sayyed Hassan] Nasrallah [the Secretary General of Hezbollah], as he knew the ‘Israeli’ society and identified its weaknesses”, he adds.

The second name in the Zionist’s writer list is Toufiq Abo Naim. Levi points out that Abo Naim took charge of the security services four years after he was released. He managed to develop the security services and enhance their potentials, and that helped in thwarting the attempts of turning on Hamas and the pursuit of collaborators.

According to Levi, the third figure is Rouhi Mushtaha who is considered as one of the most influencing characters in Gaza and the outside, and an eagle in Hamas, being a member in its political office. He was a founder of the internal security service of Hamas in the nineties and a member of the delegation sent by Hamas to negotiate the ‘Israeli’ regime with an Egyptian mediation to reach a settlement agreement.

Zaher Jabarin is the fourth figure in the list of the Zionist writer. Levi says that the path taken by this man since his release till reaching his current position as a deputy of the leader of Hamas in the West Bank had been long. He was one of the founders of the military wing of the movement there. He also enlisted students for the military wing of the organization when he was a student in An-Najah National University in Nablus, and one of these students is Yehya Ayyash who was highly skilled in making the improvised explosive devices used by the self-sacrifice martyrs.

According to Levi, Jabarin is currently in charge of the financial file of Hamas and he’s a deputy of its leader in the West Bank. He also supports the return to self-sacrifice operations and for enhancing relationships with Iran. Besides, he was among the delegation sent by the movement to Iran thanks to his good relations with Al-Quds Force of the Islamic Revolutionary Guard.

Abdurrahman Ghneimat is the fifth name mentioned by Levi. The writer says that Ghneimat is now chief of Hamas cells in Surif village near al-Khalil. He was a member of the cell that executed many operations that are still engraved in the ‘Israeli’ memory, one of which was kidnapping the soldier Sharon Edri and the operation of Afrofo café in Tel Aviv.

The sixth name is Jihad Yaghmour who participated in the operation of kidnapping the soldier Nahshon Waxman in 1994 in Al-Quds region. He is now a representative of Hamas in Turkey thanks to his ability of building relationships with the political and security leadership, as mentioned in Levi’s article.

The seventh and last main name in the writer’s list in Yedioth is Moussa Dudin, who started his career as a student in the Muslim college in An-Najah National University in Nablus and became over years a member of the delegation sent by Hamas to negotiate ‘Israel’ with an Egyptian mediation to come to a new prisoners swap deal. He is also close to Saleh Al-Arouri, the deputy of the head of the political office in Hamas.