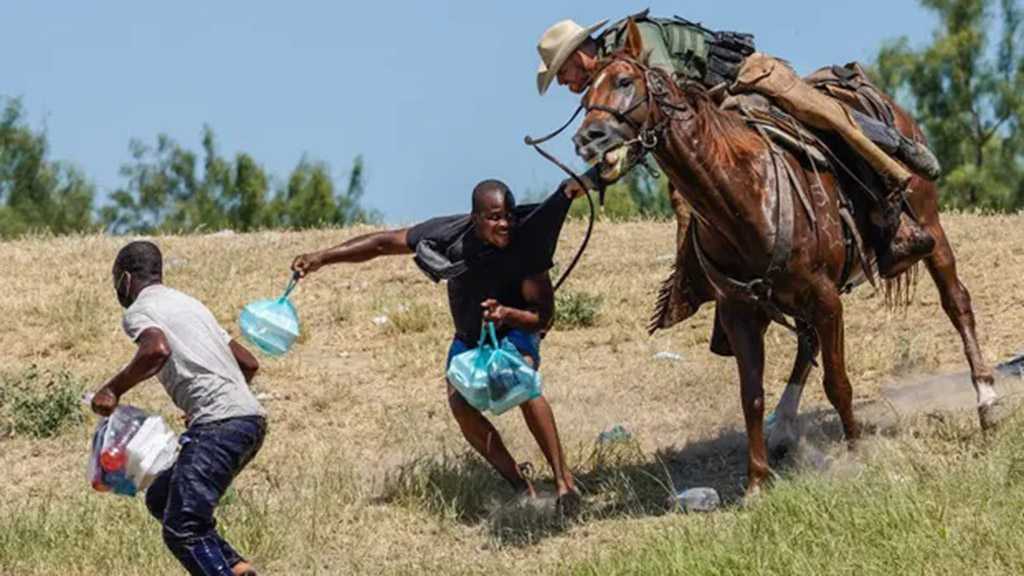 By Moustafa Bayoumi, The Guardian

You’ve probably seen a photograph haunting the internet this week: a white-presenting man on horseback – uniformed, armed and sneering – is grabbing a shoeless Black man by the neck of his T-shirt. The Black man’s face bears an unmistakable look of horror. He struggles to remain upright while clinging dearly to some bags of food in his hands. Between the men, a long rein from the horse’s bridle arches menacingly in the air like a whip. The photograph was taken just a few days ago in Texas, but the tableau looks like something out of antebellum America.

The image is profoundly upsetting, not just for what it portrays but for the history it evokes. What’s happening at the border right now puts two of our founding national myths – that we’re a land of liberty and a nation of immigrants – under scrutiny. To put it plainly, we don’t fare well under inspection.

First, the current situation. This now iconic photo by photojournalist Paul Ratje was taken at a makeshift camp that has sprung up at the US-Mexico border at Del Rio, Texas. Over the past week or two, thousands of people, mostly Haitian, have crossed from the Mexican side of the Rio Grande to the US seeking asylum. It’s important to note that they didn’t come illegally; it is perfectly legal to arrive at a border point of entry and request asylum. But conditions in the camp, according to reports, have become fetid and nearly unlivable, forcing asylum seekers to trek back and forth across the river to buy food and supplies from the Mexican side.

Then the men on horses showed up.

In video broadcast by Al Jazeera, mounted border patrol agents can clearly be seen threatening, insulting and even lashing at the asylum seekers with their horses’ reins, growling at them to stay in Mexico. The images, which sparked justifiable outrage, quickly spread – as did rightwing defenses of the agents. Fox News, for example, was quick to point out that border patrol agents are not issued whips with their gear. But you don’t have to believe in alchemy to see that when a horse’s rein is used as whip, it becomes a whip.

But is this just image control? At the same time that it condemns the actions of its own law enforcement agency, the Biden administration has refused media access to the camp at Del Rio, invoked a Trump-era order [the rarely used public health law known as Title 42] to expel asylum seekers without review, and forcibly deported hundreds of Haitians in Texas – many of whom left the country more than a decade ago, after its 2010 earthquake – back to a country that is not only reeling from a massive earthquake last August but also from a political earthquake, the assassination of its president, last July.

Without review, it’s impossible to know who is facing real threats of persecution when returned to Haiti. The United Nations human rights spokesperson, Marta Hurtado, said that the UN “is seriously concerned by the fact that it appears there have not been any individual assessments of the cases”. Why does the Biden administration not share her concern?

One has to wonder if the same policies expelling Haitians from the US today would be in effect if those arriving at the border were Europeans or even Cubans. If history is any guide – for decades, the US privileged Cubans over Haitians and other Caribbean peoples in immigration matters – the answer is no.

It’s one thing for the Biden administration to condemn abuses conducted by its own government that recall the worst parts of our national history. But it’s quite another to do so while maintaining the policies that enable those abuses. That’s not just cynical. It’s despicable.