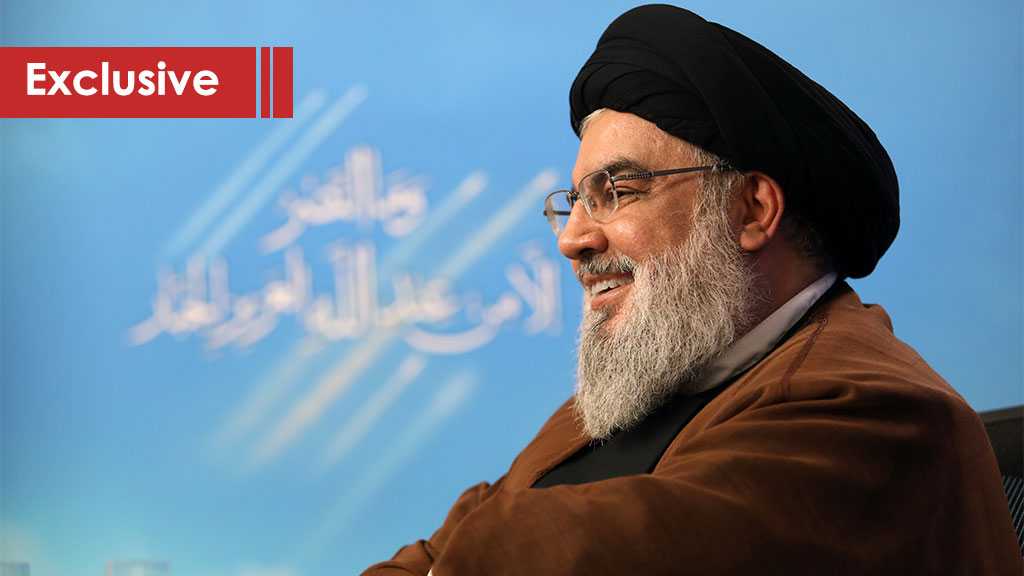 In the past, present, and future, timing is everything in both life and politics. When an actor is good at choosing the appropriate timing for his decision, success is all but guaranteed. This applies to the vast ocean of politics, and relates to every human act, even the most ordinary ones.

There is greatness in choosing the right timing to revolt against a far-reaching siege – a choice made and implemented by the master of the resistance and the Secretary-General of Hezbollah, His Eminence Sayyed Hassan Nasrallah.

It broke the cycle of the siege on Lebanon and Syria forever and threw all the plans of the United States and the Zionist entity to isolate the two countries in the dustbin of history. It was a divine timing; it came during one of the manifestations of the meeting between heaven and earth – Ashura, the memory of ideals and unique heroism throughout history.

Sayyed crowned the most pivotal event during the last decade with his resounding historical speech about the arrival of fuel tankers from the Islamic Republic of Iran to Lebanon via sister Syria. The arrival comes on a memory that also carries many noble meanings – the martyrdom anniversary of Sayyed Hadi. This sends a dual message to friends, close ones, and the enemies.

The first, and loudest, truth about the convoys breaking the siege on Lebanon is that they are coming from those who led the liberation of the land. They are repeating that, but this time, by liberating the ordinary citizen from neediness and crises and giving every Arab a sign for the only way to a solution. Hezbollah did not resort to the IMF, nor did it borrow from the West. Rather, it brought production and mobilization tools from the East. This is one.

As for the other, it was achieved by the long-term sacrifices of the Islamic Republic, Syria, and Hezbollah together, in a region already in crisis. Finally, you find an example of achievement and success, completely outside the American sphere, which opens the door to a further shattering of dependency on the US and loosening the American collar around the necks of everyone in the Arab region.

The American equation that was presented to the rulers of Arab countries has existed since the mid-1970s. It is as follows: Sign a peace agreement with the Zionist entity, and American investments would guarantee you prosperity and growth; unlimited American support would provide you with all the leadership roles you desire.

This was the first thing that was said to Sadat, for example, about the milk and honey that were waiting for him as soon as he signs the Camp David Accords. When the game ended, Sadat took a piece of paper in exchange for giving away his entire country to the Americans and Zionists. Right before he was killed by the hero Khalid Al-Islambouli, he realized that he fell for the trick in a barren desert and all that he wished for was a mirage.

Only now, the solution came from outside in a fully cooperative manner that enhances the value of the local currencies of the three countries and deprives the American giant of its absolute ability to act, punish, and move; thus, breaking the prestige of the Zionist entity and the American power to the same degree.

In the end, the Iranian solution presented something greater than the spectacle of diesel and gasoline convoys and better than just meeting the needs of a country that was already suffocating. The Iranians did so by using a method chosen by Hezbollah in its jihad work since its glorious first day on the Arab land.

With all faith, Sayyed restored Ashura to our daily reality. It became an approach not an epitaph, a renewed victory over the enemy, blood that never goes to waste, and a firm commitment to the slogan “Zainab will not be taken captive twice.” Let everyone see the transfer of the party’s slogans from the arena of jihad against the enemy to the jihad of building, serving, and cutting the continuous and long chain of suffering against the citizens of Lebanon.

Perhaps one of the most important points in Sayyed’s remarks about the muted media coverage regarding the arrival of Iranian ships to Syria is to set a new rule that achieving the greatest possible success is linked to doing the least amount of talking possible.

The multiple speeches only reveal locations and goals. Therefore, a lot of words narrow the possibility of movement, freedom of action, and most importantly, the flexibility required in a troubled area, which is as effervescent as the hopes of the actors or those who are greedy.

Sayyed’s speech, which is actually historic and not descriptive, was not a dedication to celebration or joy in the achievement of an unparalleled glory for the entire Arab nation. Rather, it was a new promise to continue the opposite approach to the submissive Arab march during recent decades and to turn the page on the old, dull, and impotent policies. Sayyed painted his speech with a victorious, confident smile after succeeding in presenting a new integrated solution away from the poor imagination that drives all our miserable rulers.