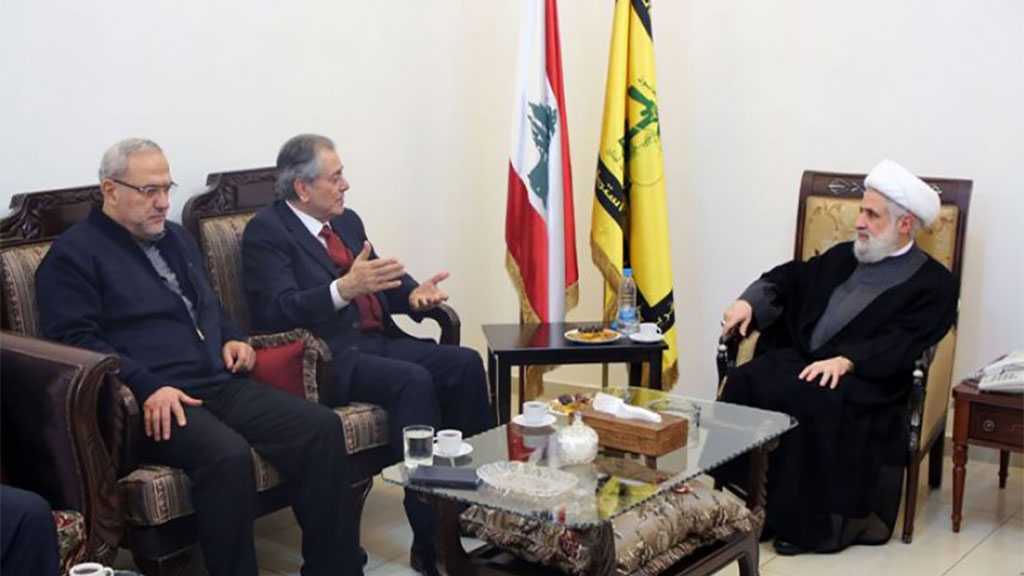 During the meeting, which was attended by the head of Hezbollah Parliamentary bloc, MP Mohammad Radd, and member of Hezbollah’s Political Council, Mahmoud Qumati, Sheikh Qassem thanked Syria for the facilitations it offered to bring oil derivatives from the Islamic Republic of Iran and deliver the cargo to Lebanon.

Sheikh Qassem also thanked Syria for its practical and positive measures in facilitating the transfer of natural gas from Egypt and electricity from Jordan.

The senior Hezbollah official stressed on the necessity of reviving brotherly relations between Lebanon and Syria, and labelled the breakdown of the American siege on Syria, by breaching the hostile so-called ‘Caesar Act’, as the beginning of a new phase of confrontations that will score political and economic victories that serve the interests of the two nations.

“Hezbollah confronted ‘Israel’ to liberate the land and the people, and is confronting the economic and social blockade to achieve pride and enhance Lebanon’s independence as well as to protect citizens on both social and political levels,” Sheikh Qassem underscored, adding that “Hezbollah will be there in all fields that have to do with independence and dignity to confront the American-‘Israeli’ aggression.”

Ambassador Ali, for his part, described the meeting as an opportunity in which the entire regional scene was reviewed.

“Investing in the victory of Syria and the Resistance against terrorism that posed a threat to the region and the world has been discussed,” he said.

Ali then underlined the necessity to invest the success in the steadfastness and victory in the same front where Lebanon and Syria have been, especially that the forces that invested in terrorism had to review its stances after being ousted from the region in a way or another.

“The ‘Israeli’ enemy is confused, and the Takfiri terrorism is moving its investment from a side to another. However, all of this represent strengths that must be invested and built upon,” the Syrian ambassador noted.