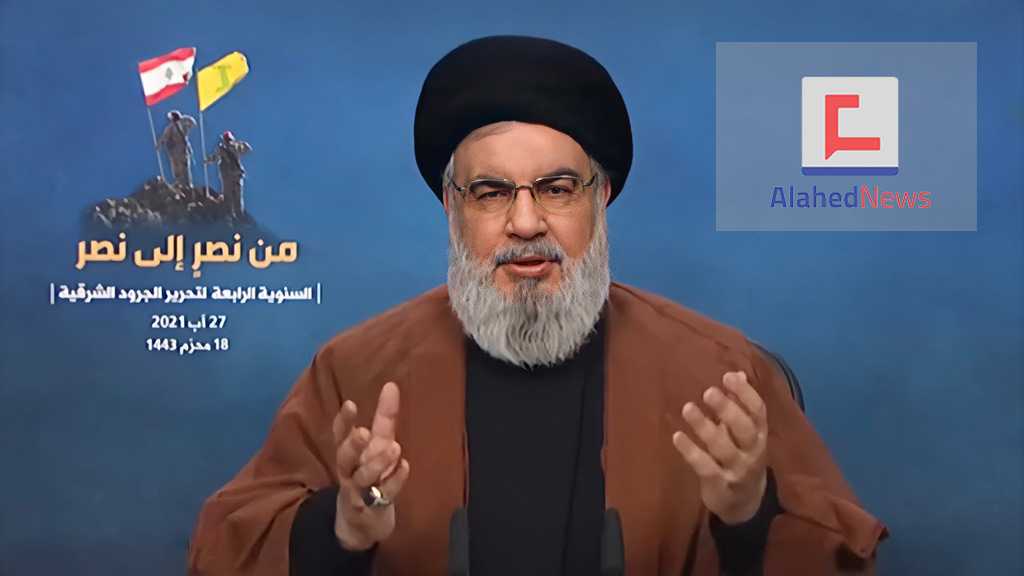 During his speech on Friday, August 27, 2021, Sayyed Nasrallah explained the importance of Lebanon’s 2nd Liberation and its implications regionally and internationally, in addition to several other Lebanese issues before concluding his speech with the anniversary of the disappearance of Imam Moussa Sadr and his companions.

The Resistance Leader asserted that Lebanon's Second Liberation is considered “as a day of celebration; the first liberation was that of South Lebanon on May 25th, 2000, and the second was on August 28th, 2018”.

“Hezbollah insists on celebrating the 2nd Liberation day to take live lessons from the painful experience and to remind of the incoming dangers and threats,” His Eminence said, adding that “We celebrate to hail the huge sacrifices that the people offered and that led to this victory”.

More on the occasion, Sayyed Nasrallah asserted that the victory Hezbollah has scored “didn’t happen without a cost, it was the result of sacrifices, blood, patience and steadfastness”.

The SG further explained that “the ‘Joroud’ Victory came after a universal war on Syria and part of a dangerous scheme drawn for the region”.

According to Sayyed Nasrallah, the Wahhabi Daesh [Arabic acronym for “ISIS” / “ISIL”] “sought to take control of Syria entirely, and Lebanon was a part of its scheme as well”.

Furthermore, part of the Wahhabi group’s scheme was “to link Palmyra to Qalamoun,” His Eminence said, adding that “had it been able to do so, the battle would have been more difficult”.

In the light of the aforementioned, Sayyed Nasrallah highlighted the fact that “Daesh received international and regional support as well as major facilitations”. He went on to say that thousands of the terrorist group’s “militants were brought to the region”.

The Secretary General reminded that “Trump and other officials have over time repeated saying that Daesh is the product of Barack Obama and Hillary Clinton”.

In a parallel platform, His Eminence focused on the fact that “Daesh resembled a permanent threat to the outskirts [Joroud], Beqaa, Beirut and the Lebanese Army, and this was documented in their video tapes”.

Sayyed Nasrallah pointed out that “The state failed to take the initiative in face of the terrorist and to defend the towns and villages in face of Daesh”.

In a related notion, the Resistance Leader noted that “The US embassy prevented the Lebanese state from confronting Daesh by threatening it to stop aid to the Lebanese Army”.

Elsewhere in his speech, the Secretary General reiterated that “When Hezbollah interfered in the Joroud battle, it has expressed the response to the people’s will, and the people of the outskirts, whether Muslims or Christians”.

During the Joroud Battle – also known as the Dawn of the Outskirt Battle – the resistance fighters offered many sacrifices to liberate the outskirts, and “there have been many volunteers among them”, Sayyed Nasrallah said.

His Eminence made clear that Hezbollah interfered in the battle only “after the State refrained from shouldering its responsibility to liberate the land and defend the people”.

Sayyed Nasrallah restated that “liberation was the result of years-long sacrifices offered by the Syrian and Lebanese armies and people of both countries”.

Also in his address, the SG credited Iran for its support to Syria and Lebanon during their fight against terrorism, saying that this fight “happened thanks to the Islamic Republic of Iran”.

His Eminence noted that “The battle for liberating the outskirts was a new experience that was scored as part of the equation of ‘Army, People, and Resistance’”.

“Our battle”, according to Sayyed Nasrallah was “aimed at protecting Lebanon, liberating the land, and confronting the aggression”.

The SG warned that “Atop of the victory of the golden equation are the armaments of Resistance which some seek to disarm”.

And yet, His Eminence said, “The scheme being plotted for the region is collapsing,” giving the United States’ failure in Afghanistan as an example. “What we are witnessing in Afghanistan today is a complete US defeat and the entire failure and collapse of the Americans,” he clarified.

Sayyed Nasrallah made clear that “What is happening in Afghanistan represents a sounding ethical collapse, reflected in how the US dealt with those fleeing Kabul Airport”.

Relatedly, the SG expounded that “The US planes and helicopters transferred Daesh militants from Syria to Afghanistan” with the US aiming “to confuse all countries neighboring Afghanistan”.

“Daesh is an American tool and the Afghan experience must be a lesson for every country,” Sayyed Nasrallah emphasized.

His Eminence elucidated to those betting on the US that they “should take lessons from the way it treated its allies in Afghanistan”.

On the issue of US sanctions, Sayyed Nasrallah spoke of sanctions targeting both, Lebanon and Syria. “There is a huge blockade targeting Lebanon in economic bans via the threat of US sanctions,” he said, adding, “The Caesar Act didn’t besiege Syria alone, but also Lebanon”.

“The Caesar Act closed the door in front of the Lebanese people who wanted to invest in Syria,” the SG noted and interpreted that “Any facilitation that might be able to revive the Lebanese economy, such as electricity, were banned”.

Still on the issue, Sayyed Nasrallah pointed out, “Being free from the US bans and veto, we could have revived the sectors of electricity and gas in Lebanon,” adding, “Had the Lebanese people raised their voice high against the Americans, we could have been excluded from sanctions”.

To the Americans, Sayyed Nasrallah said, “If you really do care about the Lebanese people, then lift sanctions against make Lebanon and stop your threats”.

Regarding the Iranian fuel vessels, His Eminence explained, “We agreed with the Iranians to start loading a third ship with oil derivatives”, noting that Lebanon needs “more than three ships to confront the near future phase”.

On the Lebanese arena, the Secretary General highlighted the importance of forming a government as soon as possible in order to start solving the problem.

The Resistance Leader regretted that “all the bloodshed and all the pains suffered in Lebanon didn’t push the officials to make the achievement of forming a cabinet”.

He further noted that “Everything circulating about linking the formation of the government with foreign factors such as the Vienna talks is a ‘mere talk’”.

A final point on the internal Lebanese affair, Sayyed Nasrallah said, “The investigating judge’s act is rejected and the judiciary is demanded to intervene and act according to the Constitution”.

On the anniversary of the abductions of Imam Sayyed Moussa Sadr and his companions, the Hezbollah Leader said, “What happened is and aggression and injustice against the nation, and a targeting of the Resistance”.

“Sayyed Moussa Sadr sought to protect the blood of all the Lebanese people, and to prevent sedition and destroying Lebanon,” Sayyed Nasrallah clarified.

Accordingly, His Eminence asserted, “We will continue in the path of Sayyed Moussa Sadr and will achieve his goals; his name will strongly remain present in all our practices”.

Sayyed Nasrallah concluded his speech by hoping “to remain in the position where we can move from one victory to another and to overcome the economic war imposed on our people”.

Consequently, the SG reiterated, “If it weren’t for the American veto, we would have been able to revive the electricity and gas sectors in Lebanon”.