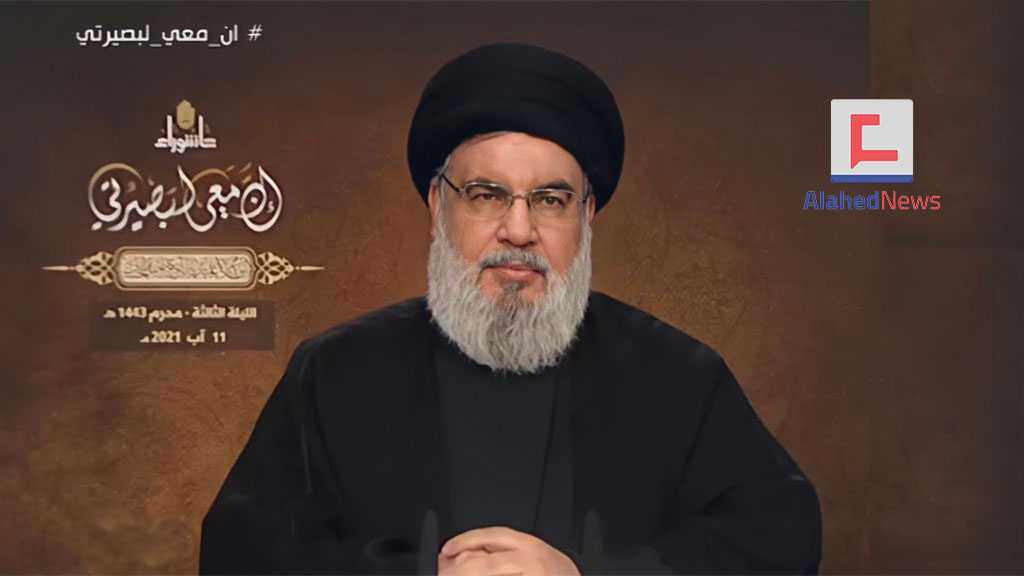 The political segment of the speech of Hezbollah’s Secretary General His Eminence Sayyed Hassan Nasrallah on the third night of Muharram 1443 AH.

[...] We are in the midst of a long battle, an intense conflict and are facing various challenges and dangers. Accordingly, we affirm the following:

Second: We must take advantage of all the possibilities, opportunities, and capabilities available through the media sphere, and this must be an essential part of the battle among the people and public opinion.

You must not take every piece of news that comes to you, build on it, distribute it, and adopt it because this means destruction and the end.

If the jihadis and the faithful among us in the world and in our region believed all the rumors and accusations, they will vanish within a few days. They will seize to exist, lose their self-confidence, morale, and hopes. Therefore, the first step is being immune! And when we hear any news, whether it is related to us or others, we should not accept it whatever it was at a time when accusations, lying, forgery, and distortion are unfortunately the basis!

And what if this news comes to you or comes to us from hostile sides, from conspiring sides, from sides that wish we do not exist in the first place. We should not believe it, accept it, nor build upon it at all. Anyways, one must investigate.

Fourth: In our media confrontation, whether it is defensive or offensive, it must be based on principles and rules, including:

1.    Clearly stating the position to the people (we are all responsible).

2.    Explaining the facts of the situation for the people and public opinion.

3.    We must have a logic that we present to people, an inference, a proof, an argument because we want people to have the ability to analyze, be aware, understand, and estimate the situation, and this is what we call insight. And they understand the foundations, rules, premise, evidence, arguments, logic, goals, direction, path, and discipline so that this march can integrate together.

4.    Relying on the truth: We must be very careful that our position is right and that what we say is true.

5.    Honesty in conveying facts: We must not falsify, distort, or invent facts.

6.    We must not falsely accuse anyone: We must not accuse anyone without evidence, and we must not go along with slander and accusations.
7.    Take advantage of all modern technologies in our media campaign while adhering to religious regulations.

This media battle today is the responsibility of everyone. All men and women, young and old, must participate in it, regardless of their specialization. The most important and most dangerous thing during this time is social networking. This allows everyone to be part of the media campaign, whether attacking or defending friends and enemies. Here, we will have to be responsible since it is a threat and an opportunity at the same time. We must not be consumed by the threat, and we must always turn the threat into an opportunity.

At the level of threats, we come to our societies. Families that were enjoying calm and harmony end up in divorce. Friendships have been destroyed because of news – true or false – on social media. Economic projects collapsed. The biggest dangers are posed to security, political, social, and economic life. For example, a few days ago, a media outlet reported that gas would run out in the market. The whole world believed it. No one checked or investigated. The union and the merchants denied the news, but the people did not believe it and began to queue. And hence, the gas crisis began – demand increased, supply decreased, the door for a monopoly was opened, and prices spiked. Where did this begin? From false news on a television station or a website that reports lies! This is what is happening in our society today.

Certain political forces have been working for years to establish  friendships, an alliance, cooperation, and trust among each other. Then, in two or three days, people on social media destroy everything that was built over the years! Is this not a threat? Indeed!

At the same time, it is an opportunity, an opportunity for the oppressed, for people whose land is occupied, and for the tormented to have their voices heard by the whole world via sound, image, writing, news, feelings, etc. We must take advantage of this opportunity and not waste it.

Dear brothers and sisters, we in Lebanon are in the midst of a very sensitive battle. Today, the whole world is suffering because of social media, even in the United States. The U.S. invented the internet and distributed it to the world for goals I am not going to talk about at the present time. It is a country of public freedoms and freedom of expression. A while after the Black Lives Matter events, the killings, internal divisions, racial and national hatred, etc., there are voices in the United States today calling for the establishment of laws and restrictions on social networks; otherwise, it will lead to the destruction of the US society. It contributes to the spread of crime, hatred, and racism. This is in America, which invented the internet and distributed it to the world and claims to be the protector of freedom of opinion and public freedoms in the world, and of course its claims are lies!

Lebanon is a sensitive country. Our country is always sensitive and is in a difficult stage. It is fighting a long battle – the outcome is unknown at the level of the country and the region. Therefore, the environment and the supporters of the resistance must have great awareness, insight, and responsibility. And this is what we came this year to say: “with me is my sagacity.” We should be fully aware; the situation today is no longer in my hands or in the hands of the Hezbollah leadership. When an event occurs or a certain official takes a position, before I get on the phone to speak with my brothers to consult with them whether to respond or not, comment or not, issue a statement or remain silent and before I have the chance to communicate with my brothers to make a decision, social networking sites would have already made a decision, commented, attacked, and spoken – whether it was right or not is another debate.

Today, let us be honest with ourselves and with the people. I cannot claim that we can fully control social media, and I do not claim or demand that others do so because I know that they cannot. Secondly, not everything our supporters or the environment do on social media is a directive given by the political leadership. [I’m saying this] so that not one attack us later for anything related to this. This matter precedes us all, and when it precedes us all, the responsibility becomes yours. It becomes imperative for every brother and sister and every person and supporter in this environment to be responsible for every decision they make. And this decision has requirements and consequences.

When things happen, I hope that people, especially Hezbollah officials, scholars, and cadres, as well as the environment wait for directives. Sometimes the interest may require us to be silent. We have no interest in responding, for example. Sometimes, a speech is given here or there, or a statement is issued. We do not comment or respond, and I have spoken about this before. Political parties in Lebanon, their chiefs, vice presidents, deputies, officials, and media attack us day and night. However, we turned our backs to them and did not lose anything. Nothing happened to us. We were not affected, and nothing weakened us. Should we respond to everything that is said in the country?! This theory is wrong! Not only do we not agree, but I tell you, it is also wrong. There are some things that must be responded to, and there are things that must be ignored. There is no rule that says we must respond to everything. I am not closing the door to anyone who wants to respond. Whoever wants to criticize, let them criticize, but let us criticize the situation. Let us not insult the person. We should not resort to personal insults or humiliate people and make fun of others. Our Imam, Amir Al-Momineen, was insulted. His sons were insulted. His companions and army were insulted. Despite that, he told them what to say and not do. We say we are his followers; hence, we must adhere to this matter strictly.

When there is a political issue, we discuss politics; there is no problem at all. Whenever a Sayyed, a sheikh, a mufti, a patriarch, a scholar, a thinker, a media professional, etc. talks politics in the media, the people have the right to comment on their political position. They have the right to agree or disagree with them and criticize them. But the people have no right to insult them or harm them. They do not have the right to treat us like this, nor do we have the right to treat others in this way. Even if they treat us in this manner, we should not reciprocate. We should use the same literature, means, or language, because what's bred in the bone will come out in the flesh. Everything we say expresses our personality, our culture, our religion, our morals, our spirituality, and our mentality. Our tongues bring out what is hidden inside us. Brothers and sisters, insulting and slandering is not a sign of strength but rather a sign of weakness. The weak curses and slanders. The strong does not need to curse or resort to defamation and insults. The strong discusses and puts forward ideas, but there is no problem.

There are people who discussed what happened in the past few days – the Bkerke speech or others. They asked about the meaning of neutrality. However, this does not mean that you attack the patriarch. There is  no problem in the patriarch speaking about neutrality or calling on the army to prevent rockets from being fired. It is also natural for people to discuss this matter. Some say that he is a religious figure. I tell you, no. Any person in the country, big or small, has a religious or a political standing, and must be respected. It is not permissible to insult him or attack him personally. These are our morals and our values. What results from such behavior – when people attack each other? This increases enmities and grudges. It alienates you from your friends and loved ones when they see the language you use and your manner. […]