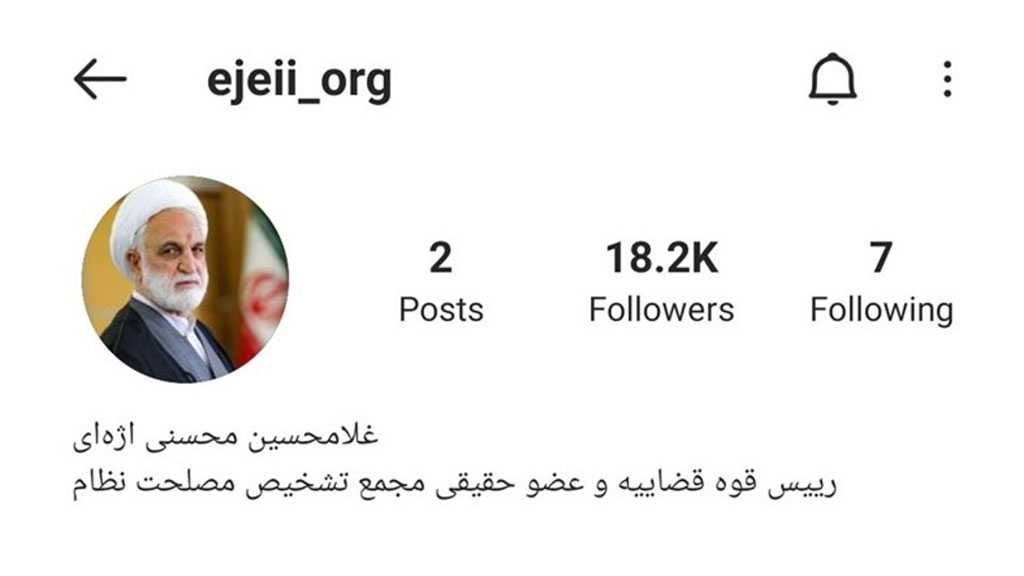 US social media network Instagram removed the page of Iran’s newly appointed Judiciary chief Gholamhossein Mohseni-Ejei for unspecified reasons, only a day after the page was set up.

Mohseni-Ejei’s page was set up on Wednesday on the occasion of Eid al-Ghadir, the day when Prophet Muhammad [PBUH] appointed Imam Ali ibn Abi Talib [AS] as his successor and Muslims’ next leader, in order to provide a direct communication line between the Judiciary chief and the Iranian people.

However, the page was removed on Thursday by the social media network without providing a reason for the move, in what observers denounced as an attack against freedom of speech.

In a statement, the Judiciary’s Media Center said efforts have already begun to find out the reason behind the move and to restore the page.

“Efforts will definitely be made to re-establish this way of communicating with people via cyberspace. Also, other pages on other social networks will soon start working for direct communication with people,” the statement added.

Early last year, after the US assassination of Iran’s top anti-terror Lieutenant General Qassem Soleimani in Iraq, Instagram embarked on a large-scale crackdown on posts that voiced support for the popular commander as Iranians were grieving his martyrdom.

It also deleted accounts of numerous Iranians who had been using the platform to communicate their devastation at the Donald Trump-ordered assassination of General Soleimani, who had played a key role in defeating Daesh [the Arabic acronym for terrorist group ‘ISIS/ISIL’] in the region.

Dozens of Iranian journalists reported at the time that their accounts had been suspended after posting pictures of General Soleimani.

In spite of their claim to champion freedom of speech across the globe, the US-based social media networks have repeatedly removed, restricted and banned the accounts of Iranian officials or deleted their posts.