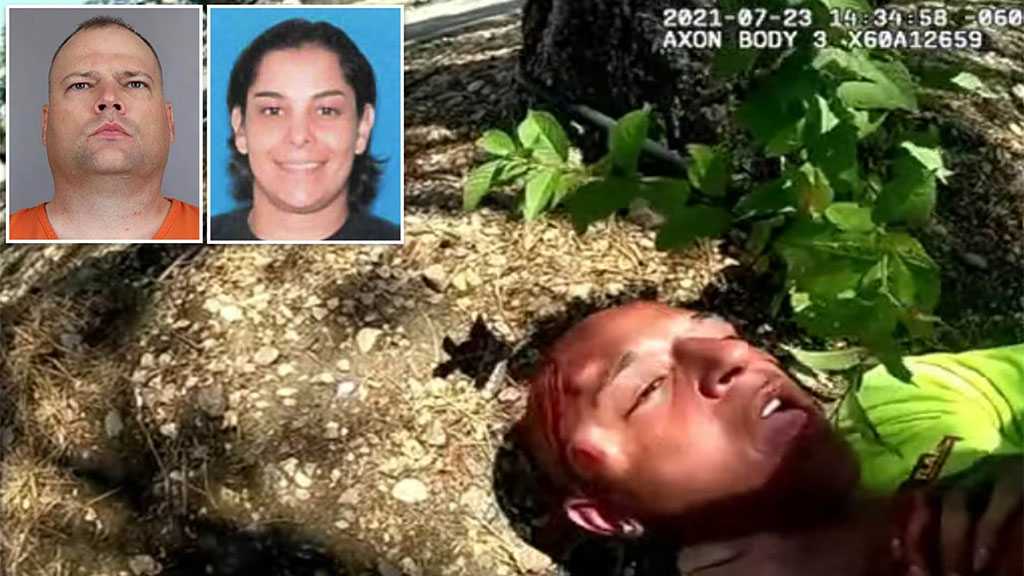 Two police officers in Colorado have been arrested and charged after beating a suspect bloody during a trespassing call, one seen pistol whipping him over a dozen times, with the local police chief calling their acts “criminal.”

John Haubert and Francine Martinez of the Aurora Police Department were arrested on Tuesday for a litany of offenses over a July 23 encounter with suspected trespassers, the city government said.

Aurora Police Chief Vanessa Wilson played bodycam footage of the incident during a Tuesday press conference, warning the video is “very disturbing” and would “shock the conscience.”

“What you’re going to see is going to anger you, and may even bring you to tears. I know as I watched it, I felt myself welling up with tears as well as anger,” she said, adding “We’re disgusted. We’re angry. This is not police work. We don’t train this, it’s not acceptable.”

Martinez, meanwhile, was charged for failing to stop the excessive use of force or report it to her superiors. Both have since bonded out of custody and are now on leave, the police chief said, though Martinez will continue to collect a paycheck in the meantime.

Vinson, 29, was hospitalized with contusions and required stitches after the scuffle. He is heard repeatedly pleading with the officers not to kill him in the footage, which Wilson said captured a “very despicable act” by the responding officers.

The police chief said the department received a trespassing call around 1pm on July 23. When Haubert and Martinez arrived at the scene, they saw three men sitting on the ground near their bicycles. Though Wilson noted they were initially “cooperative,” officers ran their names and found all three men had outstanding arrest warrants. When they tried to arrest one suspect, he and another man fled while Vinson remained seated, with officers quickly pinning him to the ground and ordering him to turn onto his stomach.

The ensuing scuffle was captured in the bodycam footage, in which Vinson is repeatedly struck by Haubert, who is also seen choking him with one arm for about 40 seconds. The officer is heard threatening to shoot Vinson several times.

Court documents obtained by the Associated Press show that Vinson was wanted after he failed to submit urine samples, stopped attending court-ordered domestic violence counseling and failed to appear for probation meetings linked to a prior offense. Wilson noted that the man likely did not know about the warrant.

Insisting on the public’s “right to know” and the need for “transparency,” Wilson said the department is conducting an “expedited” internal probe in coordination with local prosecutors, hoping it will bring “some sort of closure” to the case. In the meantime, she urged for “peace” from residents, asking that they allow the disciplinary process to run its course.