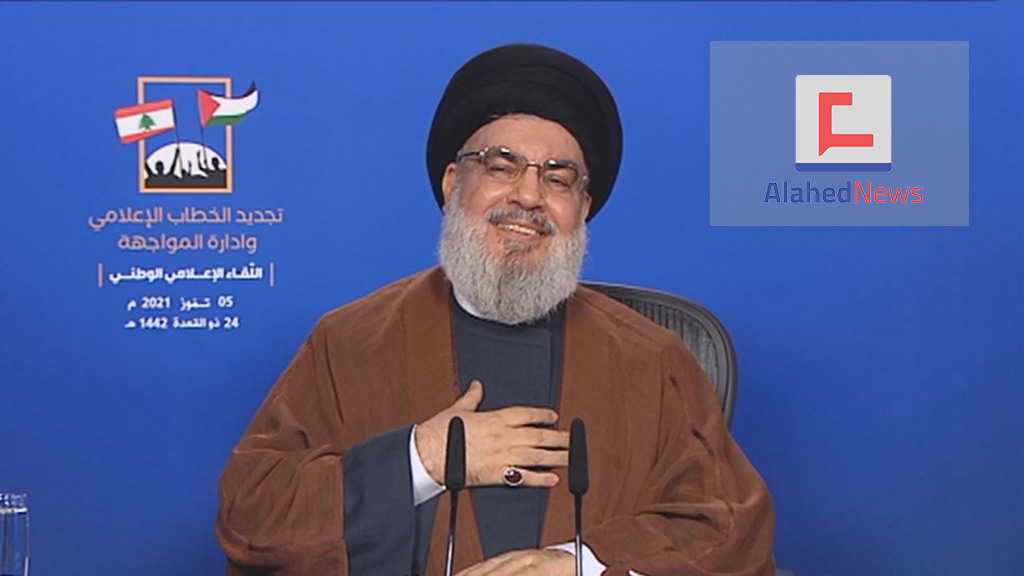 In his speech, Sayyed Nasrallah highlighted the role of the media rhetoric behind displaying and conveying the ongoing events.

He further underscored the importance of confronting the US-“Israeli” front by saying: “When confronting the 'Israeli' occupation and the American hegemony, we cannot divide this confrontation.”

“The US hegemony turned all resources in the region to serve the 'Israeli' enemy's interests,” Sayyed Nasrallah clarified, pointing out that “The Zionist entity's both existence and arrogance rely on the US support.”

“The media rhetoric of the Axis of Resistance is based on the right of the Palestinian people in their land, and the Syrian people in the occupied Golan Heights,” His Eminence mentioned.

Hailing the efforts of the Resistance’s media, he underlined that “We find the standards of righteousness in the Palestinian Cause and in the media rhetoric of the Axis of Resistance.”

“The resistance media relies on the victories of the Axis of Resistance and this axis' imposing the rules of engagement on 'Israel' and the US,” Sayyed Nasrallah emphasized, praising the fact that “The resistance’s media contributed to making victory by relying on facts, studies and researches.”

To the enemy, His Eminence said: “We’re fully aware of the points of the enemy's weakness, from which we can triumph against it.”

On this level, he stressed that “In our psychological warfare, we didn't rely on illusions or lies as one of the most important elements of the resistance's strength is not exaggerating the goals.”

“Among the most important points of strength the Axis of Resistance possesses is honesty in reporting news and facts,” His Eminence elaborated, pointing out that “There is a great development in the capabilities of the axis of resistance.”

In parallel, Sayyed Nasrallah highlighted that “The enemy today trusts the media of the resistance more than it believes its leaders, this is thanks to the credibility of our media.”

He went on to say: “The popular basis of the Axis of Resistance are ideologically and religiously diverse, but they are united by al-Quds, the sanctities and the unjustness against the Palestinian people.”

“Within the Resistance media, there are experts and innovations despite the lack of the suitable [resources] the other media outlets are being provided with,” Sayyed Nasrallah underscored, noting that “The achievements made by the Resistance media in the last decades is a major thing upon which things should be based to develop more.”

According to His Eminence: “The popular base of the Resistance needs a media rhetoric that interacts with them wherever they are, and with which they can also interact.”

“Social media participated in making the resistance’s victories,” he viewed, noting that “The enemy can take down satellite channels, but not social media platforms, so we must take advantage of them.”

Meanwhile, Sayyed Nasrallah predicted that “‘Israel’ will reconsider its calculations when it gets convinced that its threatening of Islamic and Christian holy sites will lead to a regional war.”

“When the Palestinians were displaying the victories in Operation al-Quds Sword, which were admitted by the world and the Zionist, some Arab satellite channels were concentrating on the images of sorrow and sufferings,” he added.

In response, the Resistance Leader underlined that “The resistance’s rhetoric and strategy of the new deterrence equation must be adopted and established, which is that al-Quds is in exchange for the entire region.”

Urging the resistance media to exchange experiences and expertise so that they take advantage of social media platforms, Sayyed Nasrallah explained that “The enemy bans some satellite channels and blocks some websites due to its influence.”

“The enemy could ban some satellite channels, but it could not stop social media platforms; this is why we should take advantage of them,” he said, noting that “There is a media warfare against the Resistance, for which billions of dollars are dedicated to distort the image of the Resistance.”

According to His Eminence, “There should be a media plan to confront fabrications and fake news being published by some sides, especially regarding the cause of Palestine and al-Quds.”

“Developing the media rhetoric of the Resistance must be convenient with the regional transformations and threats,” he stated, advising the resistance axis to “revise the language of our rhetoric and literature based on the major achievements.”

On another level, Sayyed Nasrallah warned that “Those setting conspiracies for the region aim at keeping people busy making their living, and this is happening indeed. The reason behind the ongoing conspiracies is to remain busy from supporting Palestine.”

Moving to the internal front, His Eminence explained that “The governmental crisis in Lebanon is a result of the regime crisis.”

“We have to work on two parallel tracks; the first is to work upon Lebanon's crises, and the second is not to stay busy from what is happening to the nation,” he said.

As His Eminence reiterated that “The US bans any aid to solve the crisis in Lebanon; this is to serve the 'Israeli' enemy,” he wondered: “Isn't the US administration the side behind banning Lebanese banks from bringing their cash from outside the country?”

“The goal behind the American blockade is to provoke the Lebanese people and the people of Resistance against it,” he said, pointing out that “The US Embassy in Lebanon is partner in the collapse of the Lebanese currency.”

On this level, His Eminence emphasized that “Wrong policies are among the reasons behind the crisis in Lebanon, but the US is the main reason because it is a partner of the corrupt.”

Denouncing the US ambassador “who is shedding crocodile tears over the Lebanese,” Sayyed Nasrallah underscored that “Major companies want to invest in Lebanon without costing the Lebanese state anything, but they are being told "No" because some are afraid of the Americans.”

On another level, Sayyed Nasrallah lamented the fact that the defendants in the Beirut Port Blast issue learned their names in the case through media outlets

Rejecting the political blackmail in Beirut port blast case, he wondered whether the investigation is a true judicial work or a political targeting. “Justice is still distant and the truth is still concealed,” he said, announcing that the coming days are decisive regarding the new government.