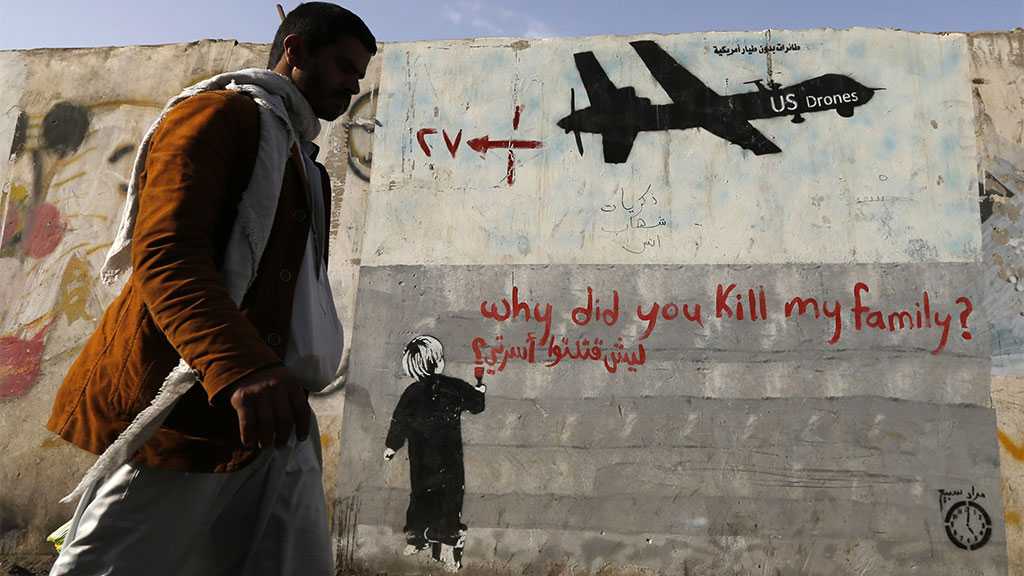 By Staff, The Guardian

Relatives of people martyred in drone strikes in Yemen have written to the UK’s war secretary to ask about his country’s involvement in the killings and request that he meet them.

In a piece by Haroon Siddique published by The Guardian, the family members said they have suffered “immense loss” of loved ones – including children – at the hands of US targeted drone strikes and are demanding to know what part the UK has played.

Among the bereaved signatories are members of the al-Ameri and al-Taisy families who between them have lost 34 relatives, nine of them children – the youngest just three months old – in a series of strikes over several years. They included a US drone strike in 2013 on the wedding of Abdullah al-Ameri and Warda al-Taisy.

The letter to war secretary Ben Wallace, seen by The Guardian, says: “The loved ones that have been taken from us are not ‘collateral damage’ or casualties of war. We live far from any battlefield and have no connection to militant groups of any kind. Can you tell us, face to face, that the UK played no role in the missile attacks that have ripped our families to pieces?

“We would like to know: was the UK involved in the strikes that killed our family members? Did UK intelligence feed into the strikes? Were our family members selected for death from US bases on British soil? And do UK pilots fly the surveillance missions that continue to terrorize our communities?”

The US drone program has been criticized as unlawful. The extent of the UK’s role has long been the subject of concern with carefully worded denials issued by the government.

The letter, from clients of the charity Reprieve, which supported them in coordinating and sending it, refers to the UK government’s fight to keep secret its policy for helping the US target drone strikes. Reprieve has been seeking full disclosure of the UK’s targeting policy, which also governs assistance provided to partners and US bases in the UK, under the Freedom of Information Act, but its attempts have so far been rebuffed.

The signatories say that not only did they lose loved ones but the strikes have left a legacy of fear with “the buzzing noise above … a constant reminder that our lives could be ended in an instant, without warning”.

Ahmed bin Ali Jaber, 31, said his uncle Salem, a teacher, and cousin Waleed, a policeman, were both killed when a missile struck their village in 2012. He said children and adults alike have been psychologically scarred, with his wife crying in fear every time a drone flies overhead.

“I can’t even begin to explain how painful and very horrifying the incident was, it’s a day that the whole village won’t forget,” he said. “We want to live peacefully. I know that Britain is a democracy and I would hope if the British government has any role in aiding the US drone program it would not accept that such a peaceful village still continues to live in fear.”

The bereaved signatories acknowledge that Covid travel restrictions make an in-person meeting impossible so ask that Wallace meet them via Zoom.

Another signatory, Adel al Manthari, who was the only survivor of a strike in 2018 which killed four of his family members and paralyzed him, said: “For three years there has been no accountability for the drone strike that paralyzed me, just silence. Now I understand the British may have been involved. Will they provide the accountability their partner [the US] has not?”

A ministry of war spokesperson said: “The secretary will review this correspondence when it is received and respond through the appropriate channels.”