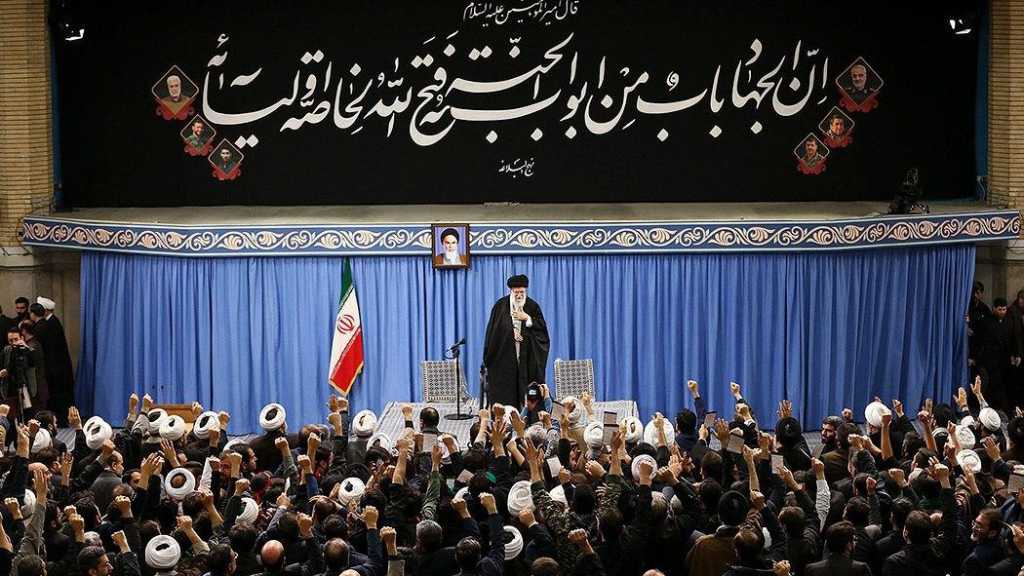 The Leader of the Islamic Revolution His Eminence Imam Sayyed Ali Khamenei said Iran’s early morning retaliation against US assassination of Gen. Qassem Soleimani was just “a slap”.

“A slap was delivered last night, but what is important is that the seditious presence of America in the region is ended. The main response is that they [Americans] leave the region,” His Eminence noted.

Imam Khamenei said Iran is quite equipped in the face of global bullying powers.

Stressing that “The Iranian people are ready to face the tyrants,” His Eminence highlighted that Iran is passing in a very critical and decisive historical moment.”

“The past must illuminate our future,” the Leader added, pointing out that “The enemies have no way but to submit to the Iranian people.”

Calling the Iranian people to unite, he urged them to recognize the enemy. “I categorically announce that the enemy is the US and the Zionist entity.”

“The military response is very important and essential, but what is more important, is ending US presence in our region. The Americans dragged strife and destruction to our region, spreading chaos wherever they are present,” he mentioned.

According to Imam Khamenei, “They [the Americans] seek negotiations with as a prelude to extend their influence, but their exit from the region is a must.”

“We have to know that the enemy is waiting and therefore we must always be ready,” His Eminence added, hailing the Shura Council’s decision regarding the response to the assassination of martyr Soleimani as correct, as well as the decision of the Iraqi parliament.

Meanwhile, the Leader confirmed that the assassination crime was great and the revenge is harsh.

He also hailed Hezbollah resistance by saying: “Day by day, Hezbollah becomes stronger, and it became the hand and eye of Lebanon.”

“The Americans want Iraq to be like the former idolatrous regime in Iran or Saudi Arabia today – a region full of oil to be under their control so they can do whatever they want – a milking cow in the words of that individual,” he said in reference to US President Donald Trump.

Praising the martyrdom of the great, noble courageous and mindful Leader Soleimani, he said: “Our martyr Soleimani was a revolutionary leader who had a great experience. He was faithful and devoted his work to God.”

“Martyr Soleimani has never sided with a certain party or side. He was a revolutionist first and foremost. He was not only brave on the militarily, but also on politically.”

Moreover, Imam Khamenei underscored that “Martyr Soleimani was able to defeat all the American conspiracies and hegemony against the weak nations in our region. He spared no effort to help the Palestinian Cause, he had unforgettable efforts.”

“The leader, Soleimani, has been always humble as he confronted American hegemony and Zionist arrogance. The scheme plan in Iraq, Syria and Lebanon was foiled by martyr Soleimani. In Iraq, Hajj Qassem was an adviser and provided the Iraqi people with all kinds of support to confront terrorism and occupation,” His Eminence said, adding “Martyr Soleimani foiled by his will and determination the conspiracies in Iraq, Syria and Lebanon.”