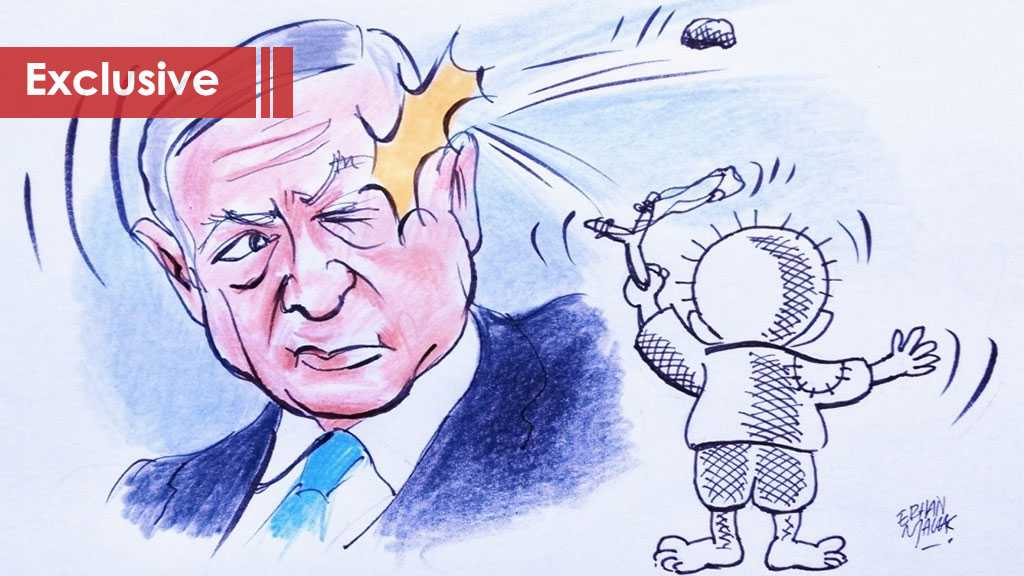 The year 2019 witnessed a series of internal and external developments that further underscored the “Israeli” entity’s downward trajectory.

These developments or junctures are further amplified by “Israel’s” role in determining the regional balance of power and the position it occupies in Washington’s regional strategy.

One of the year’s highlights is the formation of options and counter options aimed at crystalizing paths that will chart the region’s future.

Among the most prominent of these junctures is the failure of the political parties in the Zionist entity to form a government throughout 2019.  By March, “Israel” will have experienced three elections in less than a year. In addition, Tel Aviv admitted its failure to subjugate Iran. For its part, Hezbollah's response to the “Israeli” attacks marked the beginning of a new stage that involved the activation of new tools of deterrence. Meanwhile, the Gaza Strip remains a testament to the Palestinian victory.

The governmental & the electoral scene

“Israel’s” failure to form a government following two elections in less than a year (April 2019, September 2019) cannot be attributed to a mere conflict of interests between rival political factions and parliamentary blocs competing to disrupt one another.

These developments reveal how far “Israel” has fallen, even by “Israeli” standards. The interesting thing is that “Israel”, which boasts of being governed by laws (laws regulating occupation), ended up paralyzed for almost a year by a prime minster trying to preserve his immunity and avoid being tried for corruption. What is more significant is that the overwhelming majority of his Likud party (72%) supports him as recent results have shown. The entire right-wing camp and a large percentage of the people also support him.

The crisis also reflects a deep rift within “Israeli” society, which suffers from many ethnic, ideological and political divides. But the most dangerous among them is the secular-religious rift that has deepened to the point of conflict over “Israel’s” identity and society. The dispute over Haredim enlisting in the army is only one aspect of this crisis. By the way, if this issue were resolved, the government would have been formed at the beginning of this year.

Meanwhile, in his fight against the judiciary, Netanyahu resorted to help from his Likud party, the right-wing camp and the right-wing public to pressure the judiciary in order to prevent his trial. This is only one indication of the extent to which this entity deteriorated. This also confirms that the clash between the secular and the religious camps is intensifying, and there is no real possibility of a compromise, especially at a time when the religious current is penetrating state institutions including the army. Numerous studies confirm that the percentage of religious Zionists (who are different from the religious Haredim) has increased significantly.

The collapse of Netanyahu's ideology against Iran

Netanyahu used every occasion possible to promote the assumption that if the United States withdrew from the nuclear agreement and imposed sanctions on Iran, then the Islamic system would collapse or be subject to American and “Israeli” dictates.

Based on this vision, the administration of US President Donald Trump imposed its so-called maximum pressure campaign. At the time, Netanyahu relied on the assumption that Iran's economic situation would make it impossible to withstand the pressure. He also thought that Tehran would not dare respond to US moves with its own breach of the agreement in order to avoid an American reaction.

Less than a year since the sanctions were imposed, the failures have become evident. The Islamic system did not fall, did not subside and was not deterred.

In light of these results, Netanyahu began warning about the emergence of a superpower (Iran) in the region seeking to "remove ‘Israel’ from existence." This is only a manifestation of the collapse of his vision vis-a-vis Iran. This vision was based on the idea that the Islamic Republic would be deterred from initiating any practical steps to avoid a staggering American response. But the course of events in the Gulf region leading up to the Aramco strike crushed all these bets. They left Tel Aviv facing a new equation that forced it to re-consider its options to adjust to the emerging threats. They also prompted observers in Tel Aviv to invite "policymakers to answer the question: How did we get to a situation in which Iranian mobile missiles are installed in northern Iraq and aimed at targets in ‘Israel’."

These observers added that the reluctance on the part of the US to respond to the strikes on Saudi oil facilities is a “complete collapse of the security doctrine that Netanyahu is leading.” Meanwhile, Netanyahu acknowledged that his ideology towards the Islamic Republic had collapsed. In a speech to the Knesset he warned that “there is another Middle East. Something happens here. A changing Middle East. And it is changing very fast.”

Netanyahu explained this development by saying, "We are facing a huge security challenge, which is increasing from week to week ... Iran is arming and bullying. Its boldness is increasing…."

Faced with this reality, Netanyahu concluded that "Israel" was obligated to develop alternative options in line with the magnitude of the challenge that followed the failed American pressure option. This was evident in Iran’s continued advancement in its nuclear program, the evolution of the operational messages of Iran's allies in the region and the victory of the axis of resistance and the development of its capabilities.

Against this backdrop, Netanyahu saw that "this reality forces us to grow and arm ourselves as well as provide our soldiers with defensive and offensive tools, in terms of size, strength and quality, we have not seen before. Remember and mark my words."

The warning from “Israeli” Chief of Staff Aviv Kochavi about the qualitative development of the resistance axis’s capabilities and its success in reducing the qualitative gap with the “Israeli” army comes in the same context. Kochavi also underscored the need for rapid countermeasures.

He, then, concluded the year with a speech at the Herzliya Conference that reflected Tel Aviv’s fear of growing regional threats. During the conference, he revealed to the “Israeli” public that missiles from the axis of resistance could destroy “Israeli” cities in any future war. This constitutes a clear and direct acknowledgment of the military establishment's inability to deter or intercept these missiles.

Netanyahu outlined his vision of the constraints and dangers facing "Israel" by saying that "because of our small geographical area, overpopulation and the large number of threats surrounding us, the ‘Israeli’ security needs have always been greater than the needs of any country of a similar size."

Furthermore, he pointed to the need to "protect the home front, infrastructure and important government institutions, in light of the change in the enemy's doctrine."

These elements, discussed by Netanyahu, reveal a serious recognition of the constraints and risks facing the entity's future. They clearly explain the origin of the obsession with existential threats that remains dominant among enemy leaders despite their denials.

Raising the specter of this obsession is the presence of precision rockets along the front lines. This is what prompted Netanyahu to place this issue among "Israel’s" top priorities after its nuclear capabilities.

The horror that inhabits leaders in Tel Aviv stems from the possibility of these weapons appearing in countries surrounding the “Israeli” entity. This is what it sees as a serious foundation for its demise from the regional map.

This year was marked by an “Israeli” attempt to establish a new equation along the Lebanese front. Hence, it launched a failed security operation with two drones in the neighborhood of Moawad. This coincided with an “Israeli” attack in Syria that resulted in the martyrdom of Hezbollah fighters.

Hezbollah responded with a missile operation near the Avivim settlement, crossing “Israel’s” red lines regarding the Blue Line along the occupied Palestinian territories.

This response set a founding precedent in the deterrence equations against the enemy. This was revealed by a summary of an investigation on this operation conducted by the enemy's army. It implicitly demonstrated that Hezbollah's missile operation had achieved its deterrent and political objectives. Hence, it was transformed from a localized operation into a key juncture with strategic dimensions.

These dimensions are reinforced by the fact that the messages implied in this operation will surely be brought to the table of political and security decision-makers in Tel Aviv when studying any future aggression. It also means that the enemy's leaders understood, concretely, that Hezbollah would respond to any future attack against Lebanon.

Moreover, it marked the start of the process that would establish new equations aimed at keeping Lebanon’s airspace free of violations and confusing espionage operations by “Israeli” reconnaissance aircraft.

Gaza is a dagger in the waist of the enemy entity

The resistance remained steadfast in the Gaza Strip. The failed attempts of the enemy to subdue it and turn the Palestinian people against it also featured prominently. Every time “Israel” tried to change the equation, the resistance responded effectively. It illustrated the Palestinian people’s potential and determination. If the surrounding circumstances matured, they could bring about a historic change in the equation of the conflict on the land of Palestine.

The most prominent juncture is the assassination of Bahaa Abu Al-Atta. This event ran parallel to the assassination attempt of the military official, Akram al-Ajouri, which targeted the very essence of the Jihad movement. In any case, Tel Aviv has not succeeded over the past years in defeating the resistance factions, nor did it succeed in preventing its development, deterring it, or subjugating it. On the contrary, it has turned into a match for “Israel” that imposes a price for its policy of occupation, repression, abuse and siege.

As was the case along many key junctures where Tel Aviv failed to undermine the resistance axis, 2019 marked a new leap in the disintegration of the enemy's regional bets.

The victories of the axis of resistance, Hezbollah’s response in Lebanon, Iran’s steadfastness and its transition to the response stage, further advanced the deterrence equations.

Nevertheless, foreign interference is still attempting to get to the axis of resistance through its internal arenas in the hope of limiting it and drowning it in domestic problems.

But the problem for the “Israeli” entity and the US is that the axis of resistance emerges victorious at every juncture, it emerges more powerful to face the next stage of the scheme. This is reflected by the stages during previous confrontations and the abilities it possesses.