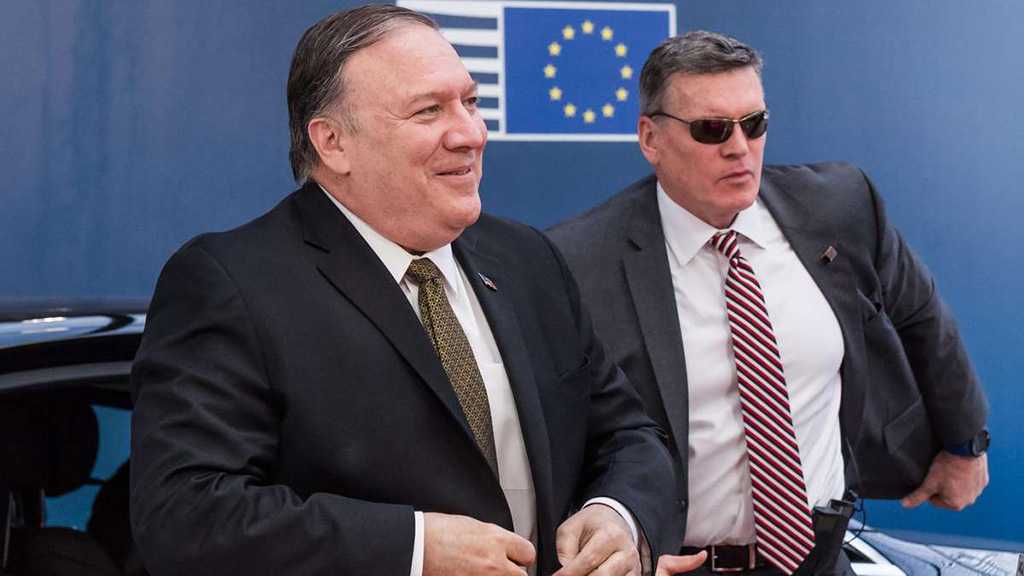 US Secretary of State Mike Pompeo crashed a meeting of European foreign ministers in Brussels on Monday to push for a united transatlantic front against Tehran and its nuclear program.

Pompeo, however, failed to bend attitudes among leaders who fear that the United States and Iran are inching toward war.

His last-minute decision to visit the European Union capital, announced as he boarded a plane from the United States, set up a confrontation between the top him and his European counterparts, who have been scrambling to save the 2015 Iran nuclear deal in the wake of the US withdrawal last year.

At least one, British Foreign Secretary Jeremy Hunt, said he feared that unintentional escalation from the United States and Iran could spark a conflict — an unusually bold statement that appeared to assign equal culpability to Washington and Tehran.

The visit came on a day that the Saudi Foreign Ministry said two of the country’s oil tankers and a Norwegian ship were damaged over the weekend near the Persian Gulf, in what it claimed was an “act of sabotage.”

A statement from Thome Ship Management, the owners of the Norwegian-flagged vessel, said an “unknown object” had created a hole in the hull of one of its ships, the MT Andrea Victory. Photographs of the ship show a hole just above the waterline.

Neither Saudi Arabia nor the United Arab Emirates produced photographs to support claims that Saudi tankers had incurred “significant damage.” The incidents did not cause any casualties or oil spills, according to a statement by Saudi Energy Minister Khalid al-Falih.

The countries stopped short of assigning blame, but the incidents occurred at the same time and in the same place off the coast of the UAE only days after the United States dispatched warships and bombers to the area to deter alleged ‘threats’ from Iran.

Navy Cmdr. Rebecca Rebarich, a Pentagon spokeswoman, said Monday that the War Department is providing assistance with the investigation but that she had “nothing additional to provide at this time.”

Scott Truver, a Washington-based naval analyst, said his best assessment is that the ships were struck with some sort of floating mine that explodes upon contact. The mines are typically about 100 pounds each and can be put in place by rolling them off the side of a small surface vessel or powerboat.

“It can be done so surreptitiously,” said Truver, who has studied mines for decades. “They’re very insidious. Once they’re put in the water, they’re very hard to detect and hard to defeat.”

Iran’s Foreign Ministry, however, condemned the incidents as “alarming and regrettable” and said they would have a “negative effect” on shipping safety and maritime security, according to the Iranian Students’ News Agency.

The Trump administration has called for “maximum pressure” on Iran. The EU’s chief diplomat, Federica Mogherini, reached for a different extreme after meeting with Pompeo on Monday.

“The most responsible attitude to take,” she said, “should be that of maximum restraint and avoiding any escalation on the military side.”

Pompeo was rebuffed on even some basic requests in Brussels. While his plane crossed the Atlantic, European diplomats haggled over how much to accommodate him. Although Mogherini managed to find time, initially she said she had a busy day and that the pair would talk “if we manage to arrange a meeting.” The top diplomats of Britain, France and Germany agreed to meet one-on-one with Pompeo but would not allow the Americans the symbolic victory of a group meeting.

US diplomats downplayed talk of a split.

“No, no, this was great,” Pompeo told Mogherini after she appeared to apologize for not meeting collectively while they posed for pictures together.

“We agree on much more than we disagree. That continues to be the case,” said Pompeo’s top Iran adviser, Brian Hook. “We share the same threat assessment. We are very concerned about Iran’s — a lot of the multiple threat streams that have been reported over the last three or four days.”

But the Europeans said they are fearful about the behavior of both Iran and the Trump administration.

“We are very worried about the risk of a conflict happening by accident, with an escalation that is unintended really on either side,” said Hunt, the British foreign secretary. “What we need is a period of calm to make sure that everyone understands what the other side is thinking. Most of all, we need to make sure we don’t end up putting Iran back on the path to re-nuclearization.”

Pompeo scrapped a day of mostly ceremonial events in Moscow on Monday in favor of the Brussels stopover.

Diplomats familiar with Pompeo’s conversations in Brussels said little new ground was covered, with each side repeating talking points about whether the nuclear deal is worth preserving