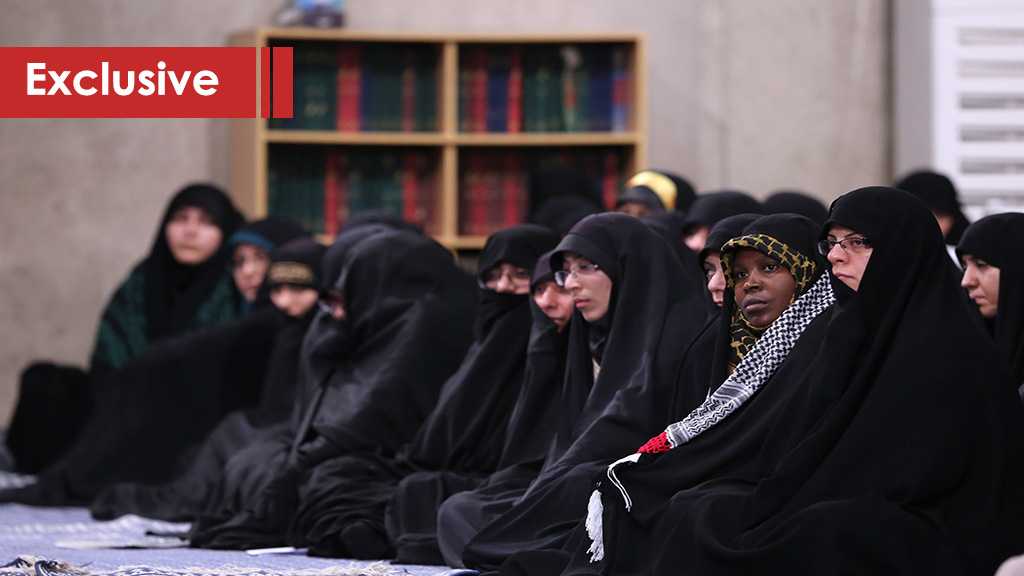 Zainab, the daughter of Hezbollah Secretary General His Eminence Sayyed Hassan Nasrallah, had her opinion on a few matters, including the role of women in society, Islamic dress code; the hijab, and the responsibility that the wives, daughters, mothers and sisters of martyrs bear. She also expressed her political views on the sanctions imposed on Iran, the US and the ‘Israeli’ enemy.

The role of women

When asked about the role and tasks of her responsibility being a sister of a martyr, she said “Imam Khamenei describes it best. The wives of martyrs must preserve the blood of their husbands by raising children properly and teaching them the principles of resistance to all forms of oppression and helping them stay on the right track.”

She pointed out to one of the most outstanding female role models in Islam. “We have a role model for all women, Imam Hussein’s sister Sayyeda Zainab. She is also the best example, we can say, on the role of women in Islam and maybe the role of the women in families of martyrs in particular. Karbala, without the presence of Sayyeda Zainab would have been to no avail. She was the one to convey the message of truth to the world and carry out the media campaign in face of the lies that were fabricated. She was taken captive from Karbala to Damascus for a reason; saying the truth out loud and preserving the blood of the martyrs and maintaining the righteous cause. A martyr’s sister, mother, or wife must also enjoy the same role in the different platforms of daily life.”

Zainab, who is pretty much interested in women’s studies and in helping bring up a healthy and strong society told me that “Women today are not only housewives, their roles have extended to reach all fields of life.” However, she stressed that “we should not also degrade the role a woman plays as a mother; it is one of the most inspiring roles she plays in life. She raises not just a family, but the entire society. She is the one raising generations, and if did it correctly then the result would be a strong society. Whenever she has time to participate in activities or work outside her home then that is excellent. She goes out and participates in all fields of life with her full and proper hijab, which does not prevent her from playing a social, political, cultural or any other role.”

Further touching on this point, Zainab said “Imam Khamenei reiterates the importance of women participating in social, political, cultural, educational and other work.  This was also seen during the Islamic Revolution when Imam Khomeini called on all women to play their role in the revolution. In his speeches, Imam Khamenei speaks about the role of women, inside the family in first place. Her role as a wife and mother is something that many underestimate. He urges women to educate themselves and read a lot and be aware of events around them, which can protect them from any psychological or cultural war. Sayyed Hassan Nasrallah also encourages women to participate in society and work outside the house as long as it does not hamper the process of raising the children and taking care of the family. This is real Islam; where women can take part in different activities, be active and social whilst performing their role in taking care of the family.”

She recalled her personal experience saying “when my children were young, I would not work outside the house for more than three hours. I believed back then that my kids need my presence. The absence of the mother leaves the children to deal with significant emotional, mental and psychological aftereffects. So it is up to a mother to balance things and do what is right.”

Islam’s code of modesty extends to all aspects of one’s life, including attire. Muslim women are courageous in standing up to societal norms in their determination to preserve their modesty and by that; these women practically exhibit how highly Islam demonstrates women and how it seeks to preserve women.

In her opinion, Zainab finds that the reason why the West and Western media try to fight hijab is because they use females as advertising tools. “In Christianity and Judaism, the culture of covering and decent attire exists, we see nuns for instance and their dress code. However, the West has changed these values so that it would fit their industrial needs. From here, hijab stereotypes surface as the West claim that it prevents women from playing their role and from enjoying freedom. However, from an Islamic perspective, we see that the impact of hijab is totally the opposite, and the Islamic Republic of Iran is the biggest evidence to that. Unfortunately, some Muslim countries deprive women from their basic rights. We have seen such deprivation in the tiniest things were women are prevented from driving cars, or going out to society. This is not part of Islamic teachings and unfortunately these countries allow their close-mindedness to set the rules and regulations and prevent women from their basic rights.”

Addressing all people, Zainab said “For those who want to see what real Islam is like, I invite you to visit Iran and see how successful women are. Here, women do whatever they want while preserving their Islamic dress code. They have attained a lot in politics, culture, education, sports, technology and other.”

As the Islamic philosopher and scholar Morteza Motahari said, a woman wearing Hijab and preserving her piety is like a pearl that has become a metaphor for something rare, fine, admirable and valuable. People do the impossible to procure a pearl that lives in a thick shell which is its safe zone. Hijab to a woman is like that shell. It protects women but does not prevent their inner beauty from shining. Decent women are respected as human beings despite their gender.

She went on to say “We are also a people who realize the crisis and live the harsh economic crisis too due to the sanctions and Western interventions. Of course no one is happy with the situation, but we know how to adapt and we can deal with it. God willing, the Islamic Republic that was established by Imam Khomeini and which represents a genuine Islamic country is protected by our Imam Mahdi (twelfth Infallible Imam in Shia faith). There are difficulties and we have to be patient. We cannot claim that it is easy or that the people are not being hurt. However, a country like Iran with all its power, knowledge, technology and Islamic spirit and faith can definitely stand up in the face of sanctions and tough circumstances and they will win at the end of the day.”

Zainab agrees that the US cannot be trusted. “As Imam Khomeini said, America [the American government] is the great Satan. We are naïve to think that if we try to become friends with the US for the sake of worldly common interests, things will work out. We have already seen multiple examples of countries that have tried being friendly with the US and we witnessed the consequences. America does not have friends and does not know how to keep friends. The only thing America cares about is its own greed and interests. Any policy of compromise or friendliness with the US or the ‘Israeli’ [apartheid regime] is a mistake and is not even possible. Both have been playful and have been exploiting the region, and we have learned this from the school of Imam Khomeini and Imam Khamenei.”

The daughter of Sayyed Nasrallah, who shares many of his traits said “it is sarcastic to see that the US puts Hezbollah, Palestine or Iran on the list of terrorist organizations while we see what is happening across the world. This is not rational, and it does not make sense. This is only because they run after their interests and needs justify ends. So they create and support terrorist groups like Daesh, and then when hens come back home to roost they turn against them.”

As for the fate of the ‘Israeli’ [apartheid regime], she said “the fate of ‘Israel’ is clear to us. The once-inevitable army will be wiped off the map and we will pray in al-Aqsa mosque. There is no doubt about that.”

Finally, addressing the youth across the world, Zainab said “I advise the youth to preserve their religion. It is this religious culture that keeps us going. It is what motivates the people to sacrifice for the sake of the cause and it is what makes the families of the martyrs strong and perseverance.”