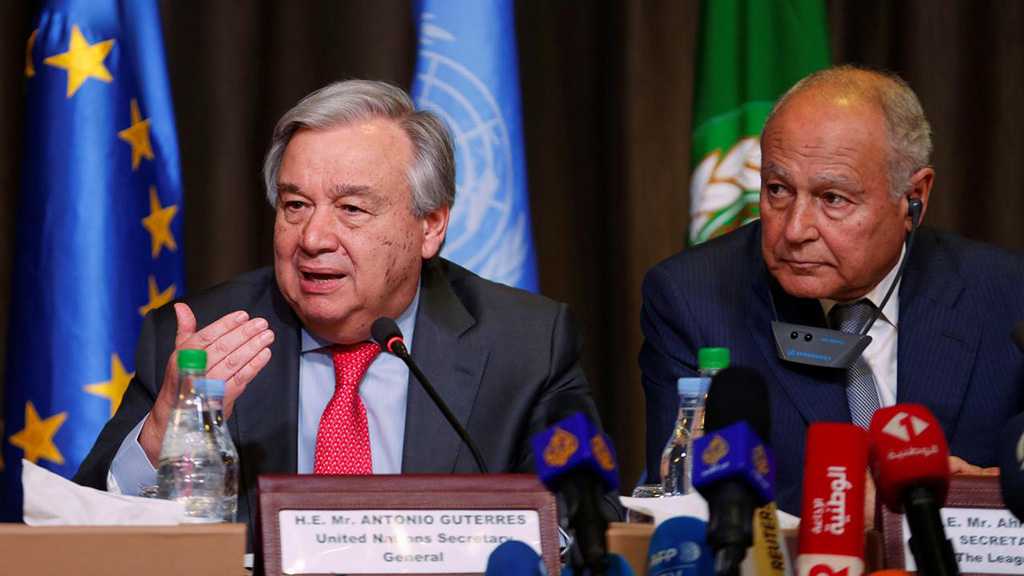 United Nations Secretary General Antonio Guterres stressed the importance of guaranteeing the sovereignty and territorial integrity in any resolution on the conflict in Syria.

“Any resolution of the Syrian conflict must guarantee the unity, [and] the territorial integrity of Syria, including the occupied Golan,” he said in an address to an Arab League summit in the Tunisian capital of Tunis on Sunday.

As “millions of Syrians remain displaced and in need, and tens of thousands are arbitrarily detained…we must keep working to forge a political path to a sustainable peace in which all Syrians are heard, grievances are addressed, and needs are met,” he added.

Guterres' remarks came days after US President Donald Trump broke decades of international consensus and formally recognized the Zionist entity’s "sovereignty" over the occupied Golan Heights, a border area the Zionist regime seized from Syria in 1967.

“This was a long time in the making. Should have taken place decades ago,” Trump said while signing the proclamation in the presence of Zionist Prime Minister Benjamin Netanyahu in the White House in Washington, DC.

However, a Wednesday meeting of the UN Security Council turned into another stage for the isolation of the US, as other countries on the council opposed Trump’s move on Golan.

At the meeting, Syria's Ambassador to the United Nations Bashar al-Jaafari lashed out at Trump's recognition, describing the move as part of a “criminal project” aimed at prolonging chaos and destruction in the region.

Syria has long reaffirmed its sovereignty over Golan, emphasizing that the territory must be completely restored to its control.

“The US will tell ‘Israel’, annex part of the Palestinian lands and grant self-rule to what's left of the land, and give the Gaza Strip a state so that Hamas can play there," he said.