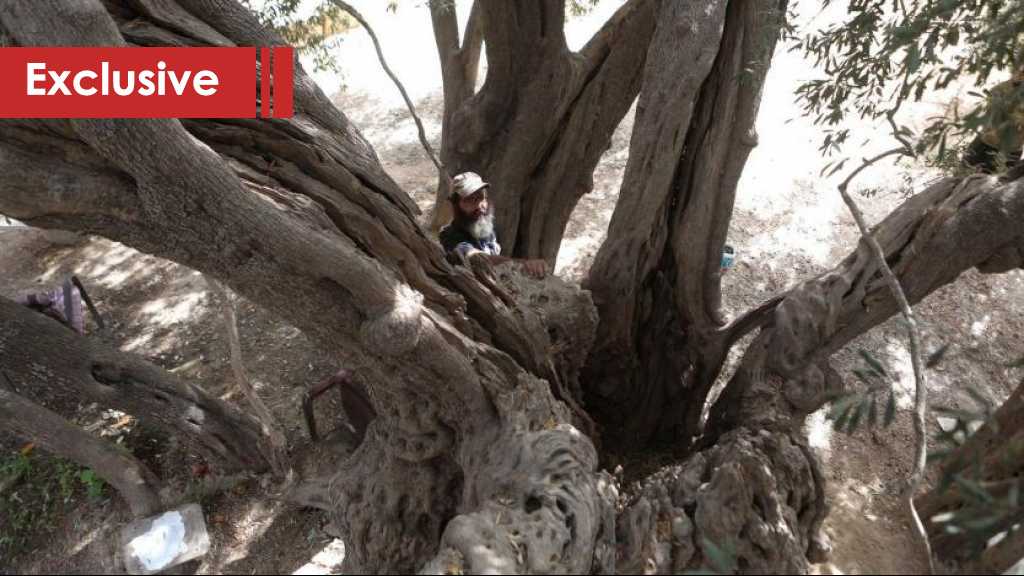 Its roots sink deep into the ground. It has a diameter of about 25 meters and a height of 12 meters. Its shadow covers a quarter of a dunum. This is the oldest and largest olive tree in Palestine. It clings to the mountains of the al-Walaja village located west of Bethlehem in the West Bank.

This 5500-year-old tree resists settlements and the Zionist separation wall that surrounds the entire village. The Palestinian Ministry of Agriculture has appointed Salah Abu Ali to tend to the tree. He waters it, grazes the grass under it and protects it from attacks by settlers and occupation forces. The tree belongs to his cousin Dawoud (Abu Ali), who inherited it from his father Muhammad Hussein Abu Ali.

Abu Ali, 45, said that he had been guarding the tree for many years from the hands of the settlers and the occupation forces, who repeatedly tried to uproot it but to no avail. He stressed that he would not leave it despite attacks from settlers and other “Israelis”.

"The tree is located in the original village of al-Walaja whose residents were displaced by the occupation in 1948. In 1956, its buildings were destroyed and a series of settlements were built instead," Abu Salah said.

This tree has a special place in history as stories are told about it. One of these was born when al-Quds was liberated during the days of the “Islamic Conquest”. It was said that Muslim leaders sat under the shade of this tree. The inhabitants call the tree the "Badawi [Bedouin] tree" in attribution to a Sufi sheikh who had followers in Palestine. His name was Sheikh Ahmad al-Badawi. He was born in Morocco and died in Egypt in 267 AH. They also tell tales about the gifts attribute to him.

"The olive tree, visited by thousands of Palestinian, Arab and foreign delegations over the years, represents the image of the conflict between us and the enemy because it is older than the occupation of Palestine, which is trying to kill it," Abu Ali added.

He pointed out that "the village has historical and archaeological features. It is part of the occupation’s ambitions. Olive trees are the most important component of their key ambitions. "

Abu Ali calls the fruits of his ancient tree the "green gold", noting that the taste is similar to the "urban ghee".

He adds that there are those who resort to the use of its oil and leaves as a kind of treatment for some diseases. It is rich in benefits that restore human health after the illness.

Approximately 2,000 Palestinians live in al-Walaja village on an area of 4500 out of 17793 dunums – the majority of which the Zionist occupation has taken over and turned into settlements and security reserves.

Al-Walaja is one of the Palestinian villages that rely heavily on olive cultivation. It produces high quality olive oil due to its high altitude and it is one of the most beautiful villages in southern Palestine overlooking the occupied city of al-Quds.

It is noteworthy that years ago, an “Israeli” group working under the guard of the occupation army took a sample of the tree to examine and compare it with another tree, located elsewhere in Palestine, which was occupied in 1948. It found out that it was older than that tree.