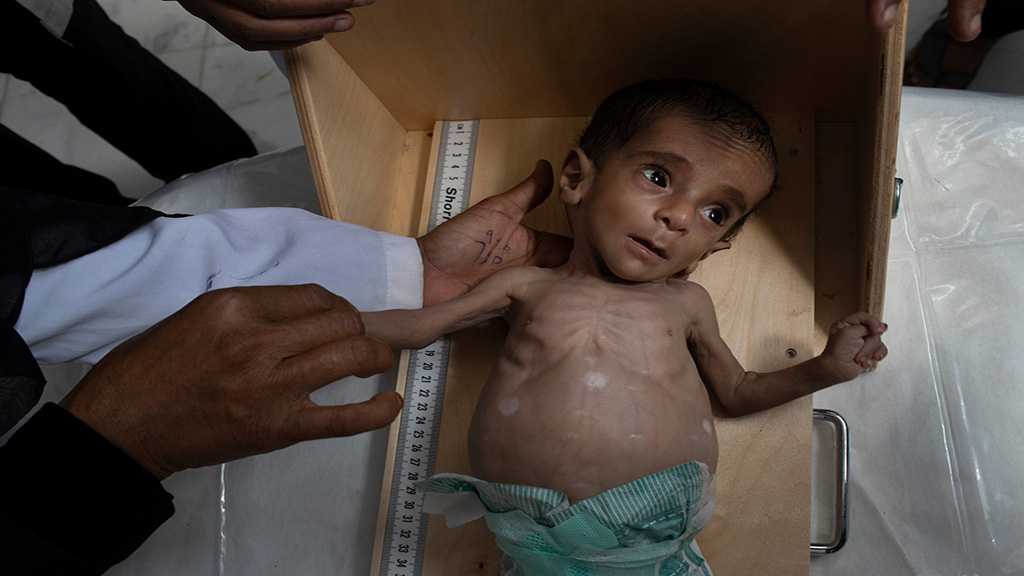 Chest heaving and eyes fluttering, the 3-year-old boy lay silently on a hospital bed in the highland town of Hajjah, a bag of bones fighting for breath.

His father, Ali al-Hajaji, stood anxiously over him. Mr. Hajaji had already lost one son three weeks earlier to the epidemic of hunger sweeping across Yemen. Now he feared that a second was slipping away.

It wasn’t for a lack of food in the area: The stores outside the hospital gate were filled with goods and the markets were bustling. But Mr. Hajaji couldn’t afford any of it because prices were rising too fast.

“I can barely buy a piece of stale bread,” he said. “That’s why my children are dying before my eyes.”

The devastating war in Yemen has gotten more attention recently as outrage over the killing of a Saudi dissident in Istanbul has turned a spotlight on Saudi actions elsewhere. The harshest criticism of the Saudi-led war has focused on the airstrikes that have killed thousands of civilians at weddings, funerals and on school buses, aided by American-supplied bombs and intelligence.

But aid experts and United Nations officials say a more insidious form of warfare is also being waged in Yemen, an economic war that is exacting a far greater toll on civilians and now risks tipping the country into a famine of catastrophic proportions.

Under the leadership of Crown Prince Mohammed bin Salman, the Saudi-led coalition and its Yemeni allies have imposed a raft of punitive economic measures aimed at undercutting the Ansarullah revolutionaries. But these actions — including periodic blockades, stringent import restrictions and withholding the salaries of about a million civil servants — have landed on the backs of civilians, laying the economy to waste and driving millions deeper into poverty.

Those measures have inflicted a slow-burn toll: infrastructure destroyed, jobs lost, a weakening currency and soaring prices. But in recent weeks the economic collapse has gathered pace at alarming speed, causing top United Nations officials to revise their predictions of famine.

“There is now a clear and present danger of an imminent and great, big famine engulfing Yemen,” Mark Lowcock, the undersecretary for humanitarian affairs, told the Security Council on Tuesday. Eight million Yemenis already depend on emergency food aid to survive, he said, a figure that could soon rise to 14 million, or half Yemen’s population.

“People think famine is just a lack of food,” said Alex de Waal, author of “Mass Starvation” which analyzes recent man-made famines. “But in Yemen it’s about a war on the economy.”

The signs are everywhere, cutting across boundaries of class, tribe and region. Unpaid university professors issue desperate appeals for help on social media. Doctors and teachers are forced to sell their gold, land or cars to feed their families. On the streets of the capital, Sana, an elderly woman begs for alms with a loudspeaker.

“Help me,” the woman, Zahra Bajali, calls out. “I have a sick husband. I have a house for rent. Help.”

And in the hushed hunger wards, ailing infants hover between life and death. Of nearly two million malnourished children in Yemen, 400,000 are considered critically ill — a figure projected to rise by one quarter in the coming months.

“We are being crushed,” said Dr. Mekkia Mahdi at the health clinic in Aslam, an impoverished northwestern town that has been swamped with refugees fleeing the fighting in Hudaydah, an embattled port city 90 miles to the south.

Flitting between the beds at her spartan clinic, she cajoled mothers, dispensed orders to medics and spoon-fed milk to sickly infants. For some it was too late: the night before, an 11-month old boy had died. He weighed five and a half pounds.

Looking around her, Dr. Mahdi could not fathom the Western obsession with the Saudi killing of Jamal Khashoggi in Istanbul.

“We’re surprised the Khashoggi case is getting so much attention while millions of Yemeni children are suffering,” she said. “Nobody gives a damn about them.”

She tugged on the flaccid skin of a drowsy 7-year-old girl with stick-like arms. “Look,” she said. “No meat. Only bones.”

The embassy of Saudi Arabia in Washington did not respond to questions about the country’s policies in Yemen. But Saudi officials have defended their actions, citing rockets fired across their border by the Ansarullah…

The Saudis point out that they, along with the United Arab Emirates, are among the most “generous donors” to Yemen’s humanitarian relief effort. Last spring, the two allies pledged $1 billion in aid to Yemen. In January, Saudi Arabia deposited $2 billion in Yemen’s central bank to prop up its currency.

But those efforts have been overshadowed by the coalition’s attacks on Yemen’s economy, including the denial of salaries to civil servants, a partial blockade that has driven up food prices, and the printing of vast amounts of bank notes, which caused the currency to plunge.

And the offensive to capture Hudaydah, which started in June, has endangered the main lifeline for imports to northern Yemen, displaced 570,000 people and edged many more closer to starvation.

A famine here, Mr. Lowcock warned, would be “much bigger than anything any professional in this field has seen during their working lives.”

When Ali Hajaji’s son fell ill with diarrhea and vomiting, the desperate father turned to extreme measures. Following the advice of village elders, he pushed the red-hot tip of a burning stick into Shaher’s chest, a folk remedy to drain the “black blood” from his son.

“People said burn him in the body and it will be OK,” Mr. Hajaji said. “When you have no money, and your son is sick, you’ll believe anything.”

The burns were a mark of the rudimentary nature of life in Juberia, a cluster of mud-walled houses perched on a rocky ridge. To reach it, you cross a landscape of sandy pastures, camels and beehives, strewn with giant, rust-colored boulders, where women in black cloaks and yellow straw boaters toil in the fields.

In the past, the men of the village worked as migrant laborers in Saudi Arabia, whose border is 80 miles away. They were often treated with disdain by their wealthy Saudi employers but they earned a wage. Mr. Hajaji worked on a suburban construction site in Mecca, the holy city visited by millions of Muslim pilgrims every year.

When the war broke out in 2015, the border closed.

The fighting never reached Juberia, but it still took a toll there.

Last year a young woman died of cholera, part of an epidemic that infected 1.1 million Yemenis. In April, a coalition airstrike hit a wedding party in the district, killing 33 people, including the bride. A local boy who went to fight for the Houthis was killed in an airstrike.

But for Mr. Hajaji, who had five sons under age 7, the deadliest blow was economic.

He watched in dismay as the riyal lost half its value in the past year, causing prices to soar. Suddenly, groceries cost twice as much as they had before the war. Other villagers sold their assets, such as camels or land, to get money for food.

But Mr. Hajaji, whose family lived in a one-room, mud-walled hut, had nothing to sell.

At first he relied on the generosity of neighbors. Then he pared back the family diet, until it consisted only of bread, tea and halas, a vine leaf that had always been a source of food but now occupied a central place in every meal.

Soon his first son to fall ill, Shaadi, was vomiting and had diarrhea, classic symptoms of malnutrition. Mr. Hajaji wanted to take the ailing 4-year-old to the hospital, but that was out of the question: fuel prices had risen by 50 percent over the previous year.

One morning in late September, Mr. Hajaji walked into his house to find Shaadi silent and immobile, with a yellow tinge to his skin. “I knew he was gone,” he said. He kissed his son on the forehead, bundled him up in his arms, and walked along a winding hill path to the village mosque.

That evening, after prayers, the village gathered to bury Shaadi. His grave, marked by a single broken rock, stood under a grove of Sidr trees that, in better times, were famous for their honey.

Shaadi was the first in the village to die from hunger.

A few weeks later, when Shaher took ill, Mr. Hajaji was determined to do something. When burning didn’t work, he carried his son down the stony path to a health clinic, which was ill-equipped for the task. Half of Yemen’s health facilities are closed because of the war.

So his family borrowed $16 for the journey to the hospital in Hajjah.

At the Sabeen hospital in Sana, Dr. Huda Rajumi treats the country’s most severely malnourished children. But her own family is suffering, too, as she falls out of Yemen’s vanishing middle class.

In the past year, she has received only a single month’s salary. Her husband, a retired soldier, is no longer getting his pension, and Dr. Rajumi has started to skimp on everyday pleasures, like fruit, meat and taxi rides, to make ends meet.

“We get by because people help each other out,” she said. “But it’s getting hard.”

Economic warfare takes other forms, too. In a recent paper, Martha Mundy, a lecturer at the London School of Economics, analyzed coalition airstrikes in Yemen, finding that their attacks on bridges, factories, fishing boats and even fields suggested that they aimed to destroy food production and distribution in Ansarullah-controlled areas.

Saudi Arabia’s tight control over all air and sea movements into northern Yemen has effectively made the area a prison for those who live there. In September, the World Health Organization brokered the establishment of a humanitarian air bridge to allow the sickest Yemenis — cancer patients and others with life-threatening conditions — to fly to Egypt.

Among those on the waiting list is Maimoona Naji, a 16-year-old girl with a melon-size tumor on her left leg. At a hostel in Sana, her father, Ali Naji, said they had obtained visas and money to travel to India for emergency treatment. Their hopes soared in September when his daughter was told she would be on the first plane out of Sana once the airlift started.

But the agreement has stalled, blocked by the Yemeni government, according to the senior Western official. Maimoona and dozens of other patients have been left stranded, the clock ticking on their illnesses.

“First they told us ‘next week, next week,’” said Mr. Naji, shuffling through reams of documents as tears welled up in his eyes. “Then they said no. Where is the humanity in that? What did we do to deserve this?”

Only two famines have been officially declared by the United Nations in the past 20 years, in Somalia and South Sudan. A United Nations-led assessment due in mid-November will determine how close Yemen is to becoming the third.

To stave it off, aid workers are not appealing for shipments of relief aid but for urgent measures to rescue the battered economy.

“This is an income famine,” said Lise Grande, the United Nations humanitarian coordinator for Yemen. “The key to stopping it is to ensure that people have enough money to buy what they need to survive.”

The priority should be to stabilize the falling currency, she said, and to ensure that traders and shipping companies can import the food that Yemenis need.

Above all, she added, “the fighting has to stop.”

One hope for Yemenis is that the international fallout from the death of the Saudi dissident, Jamal Khashoggi, which has damaged Prince Mohammed’s international standing, might force him to relent in his unyielding prosecution of the war.

Peter Salisbury, a Yemen specialist at Chatham House, said that was unlikely.

“I think the Saudis have learned what they can get away with in Yemen — that western tolerance for pretty bad behavior is quite high,” he said. “If the Khashoggi murder tells us anything, it’s just how reluctant people are to rein the Saudis in.”