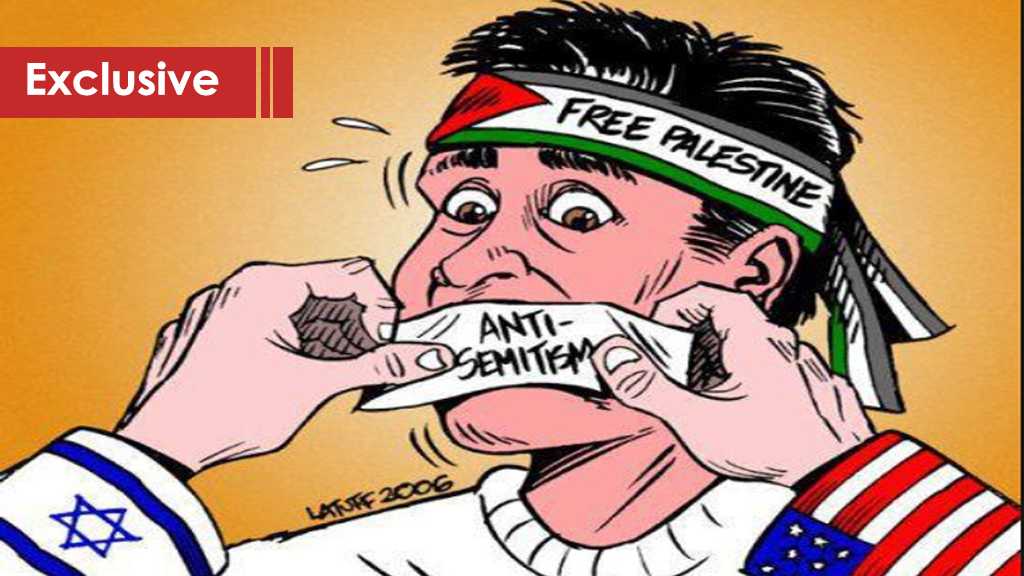 One of the most used terms of the modern world is “Anti-Semitic.” Maybe, describing it as misused would be more precise. Abused also works when discussing the way this word has been increasingly utilized during the past few decades.

Innocent people have been branded as anti-Semitic all over the globe; people from all walks of life. To be accused of being anti-Semitic could get you terminated from a job or, at the very least, may cause you to be treated with extreme prejudice. Artists who share their opinions regarding “Israeli” war crimes are battled in Hollywood; others who refuse to perform in concerts on the Palestinian raped land lose future contracts almost instantly. Even American politicians who decline to sign a document pledging allegiance to the Zionist entity are automatically branded as anti-Semitic and are made to lose elections.

You know you are branded as an anti-Semitic, according to the Zionist dominated media, if you are one of the following:

- An Iranian contesting “Israel’s”, almost daily, threats against his country

The above examples are but a small fraction of what could put you in the anti-Semitic category if you were to make your stance public regardless of what nationality you hold.

It is also known to nominate you for the title of ‘anti-Semitic’ if you consider investigating certain historical events or texts. Employing your natural human tendency to question statements is a thought crime according to those throwing anti-Semitism accusations left and right.

You are a horrible person if you try to look into whether Palestine is actually the biblical “promised land” when interpretations based on geographical indications in the holy book lead to think it should be further towards the middle of the Arabian Peninsula. You are a worse person if you do simple calculations of the number of Jews before World War II and after; you are simply not allowed to question why the change in number does not correspond to the general claim of six to eight million fatalities. You are also despicable should you want to understand why the main building for exterminating Jews at Auschwitz has had the roof restructured with new ducts for dropping Zyklon-B on victims after the war ended and its remaining occupants freed.

The Zionist media will stick so many defaming titles on anyone who tries to use the freedom of thought to tackle their stories. Some of these titles will get you imprisoned and fined.

Challenging Zionist statements is not the only way to be branded anti-Semitic, though. You may never mention “Israel” but still find yourself becoming a victim of slander and antisemitism charges by simply criticizing their allies and puppets.

For instance, if you question why the so-called Arab alliance is practicing ethnic cleansing against Yemenis, you are an anti-Semitic because what Saudi Arabia is actually leading is a termination of the inhabitants of a country that believes in the rights of Palestinians.

Try holding a conference that advocates the unity of the Arab people through cultural practices like arts and poetry. The “Israeli” media will report it as a conference of antisemitism although Arabs are, themselves, Semitic.

So, killing Semitic people is an act of antisemitism? In that case, “Israel” would be the winner of every prize that there is for that practice. The Zionists staging this farce are not so ignorant. They do, however, assume that the rest of the world doesn’t know about the ancient Aramaic language and its evolution process or the definition of the word SEMITE. Their low regard for the intelligence of others doesn’t come as surprising; after all, any person who does not belong to one of their tribes is a lesser human; if human at all to begin with.

At the moment, “Israel’s” and the Zionist movement’s loudest horn is a compulsive liar who is a war criminal by international standards and a corrupt politician by his own people’s standards. Benjamin Netanyahu, with all his dark record in every possible domain, tries to portray the Islamic Republic of Iran as an anti-Semitic state.

If, for argument’s sake, we were to limit the term Semitic to Jews only, then Iran is the only regional nation whose government has actually never treated its Jewish nationals with prejudice. And, if we were to take the word in its true definition, then Iran has been paying dearly in terms of sanctions over the past forty years for supporting none-Persians around the world – for upholding their rights to dignified lives.

Antisemitism allegations have become almost as boring as Netanyahu’s theatrics thanks to their excessive usage by Zionists against anyone who does not agree with the apartheid nature of their illegal ‘state’. Should standing up against genocide, for instance, the one committed daily against the Palestinian people, constitute a basis for labeling you as such, then the overwhelming majority of the citizens of Earth are anti-Semitic.