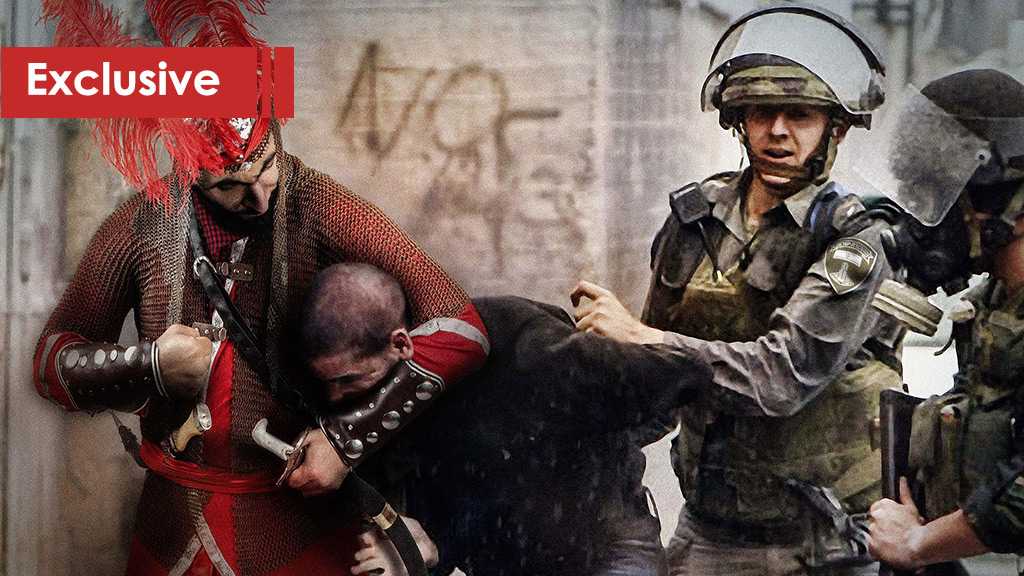 Zionists have always been controlling the politics of European strongholds through both, economy and terror. Where the first fails to twist arms, the second ensures success. They are, by far, the masters of this pair of dark practices.

The manipulation of key economic factors in a country can bring it to its knees; depending on how they (the Zionists) assault the system, they can have the general population indulge in bloody revolutions or become so preoccupied with making ends meet that citizens ignore politics and the wrongdoings of their government – bread is more precious than gold when your children cry of hunger.

When the government is the target, the highest official is assaulted in such a grotesque fashion that he ends up serving as an example to any other leader who dares contemplate, even remotely, challenging the will of Zionists.

The royal children of Tsar Nicholas II were shot and stabbed to death before mutilating their bodies when it would have been enough to just hang him alone. This was a strong and clear message to all the other royals who weren’t under the control of the Rothschilds, telling them that safeguarding their children and dynasty meant adhering to the politics of the deep “state of Zion”.

Zionists are ruthless. There is no known ethical philosophy that they follow. As individuals, they are born into different religions but are sworn to uphold the best interest of their organization – in their doctrine, religious teachings may and shall not restrict murder where deemed necessary to further the cause of global domination. Murder has been deemed necessary by them for centuries and in some instances, murder was on a mass scale. World War II is an example of that. 50 to 80 million humans perished directly and indirectly during that war. The reader can answer the question of how do we know it was the Zionists who orchestrated that war by researching which banks and mega-financial establishments had funded it and which excessively rich European royalty lent money to the Third Reich. A good starting point of the research would be looking into the historical financial ledgers of the United States’ Federal Reserve bank; the amount of transactions in favor of Nazi Germany is stunning. There is, however, a debate among historians as to which financial institution had funded Adolf Hitler more, some say The Bank of England was the bigger investor in the Third Reich’s agenda.

Contrary to the general belief that the most powerful mafia in the US is the Italian one, the real mafia muscle is the Jewish one. The film industry in Hollywood, being yet another powerful device of Zionism, brainwashed people into thinking that the Italians made up the mafia with movies like The God Father and shows like the Sopranos introducing iconic Italian mafia figures to the world.

The Jewish mafia is the one and only superpower within the United States. It is a multi-billion dollar operation that yields trillions for the Zionist movement. It is what President Kennedy was scheming to bring down. The fathers of the American mafia, the likes of Meyer Lansky and Gurrah Shapiro were not Sicilian; they were Jewish born Zionists who employed men with Italian names to be a front for their crimes so as to divert attention from them. They were the predecessors of those who killed JFK and ran the government by means of, again, economy and terror. They threatened those they could not bribe. Bankers, CEOs, Pentagon officials, judges, police chiefs, and even presidents are among the people under the Jewish mafia umbrella.

So, who is the father of Zionism? It is thought to be Theodor Herzl. They would like for the world to think so. They chose a well versed, highly educated, and charismatic young man to bring the centuries-old terrorist movement to light. Very few know that his speeches were inspired by the words of his masters during his preparation and that one of them was actually present in the first congress held in Basle in the year 1897 to give him the necessary confidence. His masters were the Rothschilds.

The father of Zionism has always been a Rothschild; at least during the past two centuries. They own the Jewish mafia and the thrones of many kings and queens. They own the generals of the armies of many countries. They own the secret societies that recruit future Zionist leaders. They own a Christian sect of over 300 million worshippers being programmed to bring down the Vatican from within.

Theodor Herzl was nothing but a spokesman for the Rothschilds. He was a higher-level member of their terrorist secret society on whose shoulders fell the responsibility of unifying and mobilizing their European lodges (the choice of the word LODGE was chosen very carefully here.)

Theodor Herzl spoke a lot and he meant what he said. He prophesized events that had been planned for at least two decades before the first World Zionist Congress took place in 1897. That very first congress was where the declaration of the rollout of their plan was made. They wanted a country of their own so as to, finally, operate under their own institutions. It was time for Zion to become a nation out in the open. Their movement had the chance to incubate within the Jewish society and so, most of the Zionists were Jews. It should be kept in mind though, as mentioned earlier, they don’t really believe in any religion. Should Moses and David come back to defy them, they would have them beheaded.

One should stop and think for a second. If those claiming Palestine to be the one true land of the Jews were so biblically set on it, why did they try to turn Uganda into their promised land? The truth is plain and simple. They occupied Palestine as a second and perhaps a third option. And, here comes the rarely spoken of revelation.

The Arab Jews, the ones who are originally Jewish in identity and belief were aware of the Zionist plans. As in any other religious group, they have the good and the bad. Some went ahead with the demonic plans in exchange for financial gains and promises of higher positions. Others remained true to their country and religion even though they had suffered for decades at the hands of the Ottomans. Those Jews comprehended the fact that if they allowed the Zionists to hijack the Jewish faith, that their religion would lose its authenticity. Those Jews were taken care of, one way or another.

Many of them were forced to flee the land of their ancestors. They traveled mostly to Europe and some to the United States. Those who stayed and resisted were killed without remorse. In their place, Zionist families began immigrating to Palestine under the pretense of making Aliyah. So as to give their gradual theft of Palestine some kind of credibility.

The Jews of Palestine were the victims of the Zionist terror just as much as the Muslims. It was all hinted in Herzl’s speeches. He said it clearly several times; namely that those Jews not going along with the Zionist plan will be made to do so. Just as he prophesized the Holocaust decades before it occurred. Herzl stressed the importance of such a catastrophic event so as to ensure and haste the plan of creating a Zionist country. He praised Anti-Semitism publicly and repeatedly because it was the catalyst for the creation of the terror nation that Zionists needed in order to formally house their gangs. They succeeded – the Mossad became the name of the union of their gangs.

It is obvious that, had the primary Zionist supporting superpower at the time not invaded Palestine, the Zionists would have created “Israel” in another geographical location. If Uganda was the first option, then any other spot on Earth would have been the second option. It just happened that Palestine was an easier bite to swallow. They would have misinterpreted the bible they hijacked again and perhaps even modified every copy to give them the false authenticity they needed to occupy the land they could put their hands on.

The so-called state/entity of “Israel” is not the home of the Jews, it is the home of the Zionist global movement. Zionists are thugs. Human life is worth nothing to them. They feed on human misery.

In a world where it is becoming increasingly difficult to own a house and feed your family, they offer free houses and secured job opportunities to those who would agree to leave their countries on the expense of Palestinians. The lie has become so old that some Jews actually believe that Palestine is the “Promised Land”. They believe that Palestinian children are “goyim” and that killing one of them is equal to slaying a chicken for lunch.

For those readers who doubt that European Jews were actually killed by Zionists, they can look up the names of Oppenheimer and Warberg. For those who doubt that America was and still is run by the Zionist Jewish mob, dig into the history of George Bush the father who is a known Zionist and his mafia accomplices who, by the way, were the real assassins of President Kennedy. To centralize the research though, just read the transcripts of Herzl’s speeches.

Lenin, who gave the order to stab the royal children of the Russian Tsar and then shoot them right before cutting them to pieces, made his Bolshevik revolution declaration only five days after the Belfour one. Lenin had Jewish roots. A coincidence? The manner of the killing of the Romanov’s was done in a very similar way to the current killings done by ISIS who were created by Zionists. A bigger coincidence?

There is no defeating Zionism as a macro counter movement because it is what they have prepared themselves for. The wars of ‘48, ‘67, and ‘73 prove that. The only way to end their terror is by organizing micro resistance movements that rely on values unfathomable to Zionists and hence, values they cannot prepare against. Those values would become the essence of the defense strategy.

It is no secret that the Zionist organizational body comprises highly educated terrorists – they hold doctorate degrees in one thing or another from the most prestigious and exclusive universities. After all, terror includes, but is not limited to, physical violence. They have always studied others and have succeeded, to a great extent, in developing a system of intelligently guessing reactions. They have a whole science dedicated to forecasting human character patterns. This shows through their historical skill of reeling in target victims into situations where the outcome of the fight is ensured.

Hezbollah did to “Israel” what a coalition of huge armies failed to do on several occasions. The humble Lebanese resistance depended on being small in size and more importantly, depended on the kind of love that Zionist textbooks don’t teach and, hence, can’t possibly counter – the love of the grandson of the Prophet Mohamed. The grandson who knew that he would be martyred in his campaign against corruption and immorality but still pressed ahead. Imam Hussein understood that the future of humanity needed powerful examples of selfless sacrifice. The men of the Lebanese resistance recognize Imam Hussein’s victory over the earlier version of Zionism; they walked in his steps and turned the “Israeli” army’s infamous might into a joke.

Doubting Imam Hussein’s victory or arguing against it is a sign of Zionist mental conditioning. Imam Hussein’s legacy lives to our day and his message, written with his blood almost fourteen centuries ago, is still read and memorized by those fighting global Zionism. Victory is not living in shame; it is dying with pride in defense of righteousness: a concept keeping the successors of the masters of Herzl from global domination.

The martyrdom of Imam Hussein made him live in the hearts of hundreds of millions and with him, live the desire to stand up against all forms of injustice and terrorist organizations like Zionism.