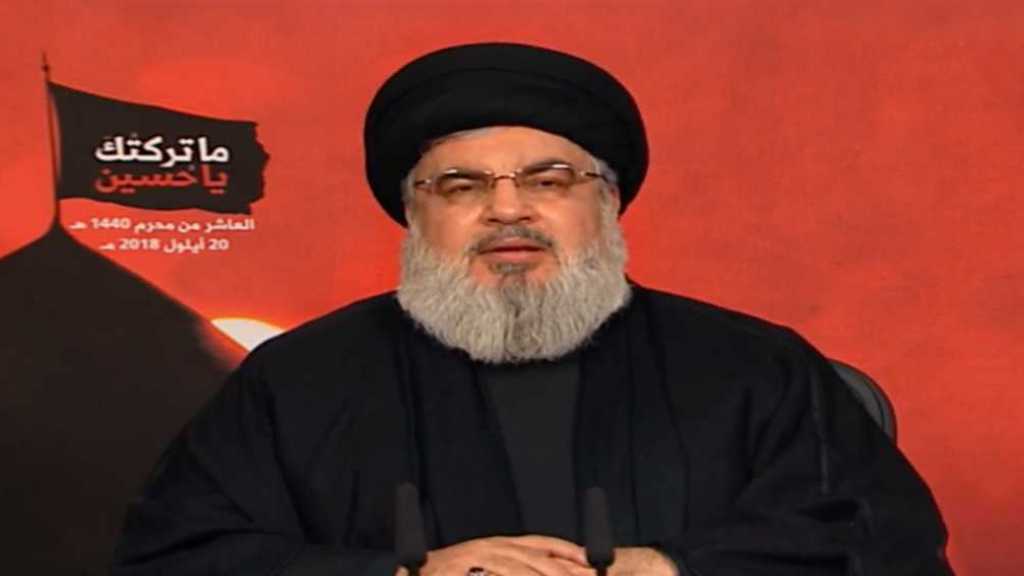 “They [the Yemenis] suffer a continuous Karbala on daily basis . In the war on Yemen, you’ll find the injustice, desolation and thirst of Karbala, You’’ find the nation’s abandonment to Karbala as well as the scenes of strength, heroism and persistence in this battle,” His Eminence said.

In parallel, he urged every honorable person in this world to cry and end his silence in face of the heinous crime carried out by the aggression against Yemen.

“This silence encourages these murderers and criminals in the US-Saudi alliance to continue their crimes against this Yemeni people,” Sayyed Nasrallah warned.

In parallel, the Resistance Leader reiterated Hezbollah's support to “the peaceful people of Bahrain, who faced all the betraying daggers as well as great injustice during his march towards freedom.”

“We were and will remain with the people in Bahrain in their quest for freedom and dignity. We support the Bahraini people, whose scholars and youths have been jailed and suppressed by the Bahraini regime” he added.

On another level, His Eminence stressed that “it is our duty to stand by the Islamic Republic of Iran, which will enter into a great and dangerous entitlement resembled by implementing the sanctions against it.”

“America is seeking to sanction Iran because of its adherence to Islam, independence and sovereignty, and because the Islamic Republic refuses to become a slave to the American master. It refuses to allow anyone to loot its money as the case is with other countries in the region,” he mentioned.

Sayyed Nasrallah went on to say: “Tehran contributes to the topple the schemes  of domination over the peoples of the region by supporting the Palestinian, Lebanese and the Iraqi people as well as the Syrians,  when the global war was launched on them.”

“Iran was one of the first countries to lend a helping hand to Syria and Iraq in their fight against Daesh [Arabic Acronym for the terrorist “ISIS”/ “ISIL” group],” he said.

On the internal Lebanese front, His Eminence called for the continuation of the political calm. He also urged for activating the Parliamentary work. “All sides must carry their responsibility in all files,” Hezbollah Secretary General stressed.

In response to the ongoing “Israeli” threats to Lebanon, Sayyed Nasrallah clarified that “the “Israelis” are angry because their scheme in the region has fallen after they have drawn great hopes on what is going in Syria and Iraq.”

“Their hopes have gone with the wind,” he said, pointing out that “the “Israeli” is fully aware that the axis of resistance has become stronger and that new countries and peoples have entered into confronting the apartheid Zionist entity.”

However, he called for “being always cautious because the Zionist enemy is not to be guaranteed  although it is afraid to enter into any battle in the region.”

To the “Israeli”, the Resistance Leader sent a sounding message: “The balance of power has changed. No matter how many times you bomb Syria I tell you the deal is done. The mission has been accomplished. We now have precision-guided munition and non-precision rockets and weapons. We are able to protect Lebanon. If “Israel” chooses war, the results will be beyond what they have ever imagined.”

Sayyed Nasrallah also vowed: “If “Israel” imposes a war on Lebanon, it will face a fate and a reality it has never expected on any day.”

““Israel” is fully aware that its weaknesses have been revealed to Hezbollah, and is well aware of our strengths,” he confirmed, highlighting that ““Israel” is aware that technology alone cannot be decisive in a war.”

“From 2006 up until know, have you ever heard “Israel” saying they will start a war with Lebanon and arrive to occupy Beirut? Never. They can't claim this anymore because their army has weakened while ours, along with the resistance, have evolved."

In addition, His Eminence addressed the “Israeli” by saying: “You know that Hezbollah became stronger.”

“The Zionist enemy used to threaten with invading Beirut in the past. However, this threatening army no longer exists. And in Lebanon, the equation has changed. God has prolonged my life, and this an evidence of your failure as you’ve failed despite your seek in the day and night to kill me,” Sayyed Nasrallah said.