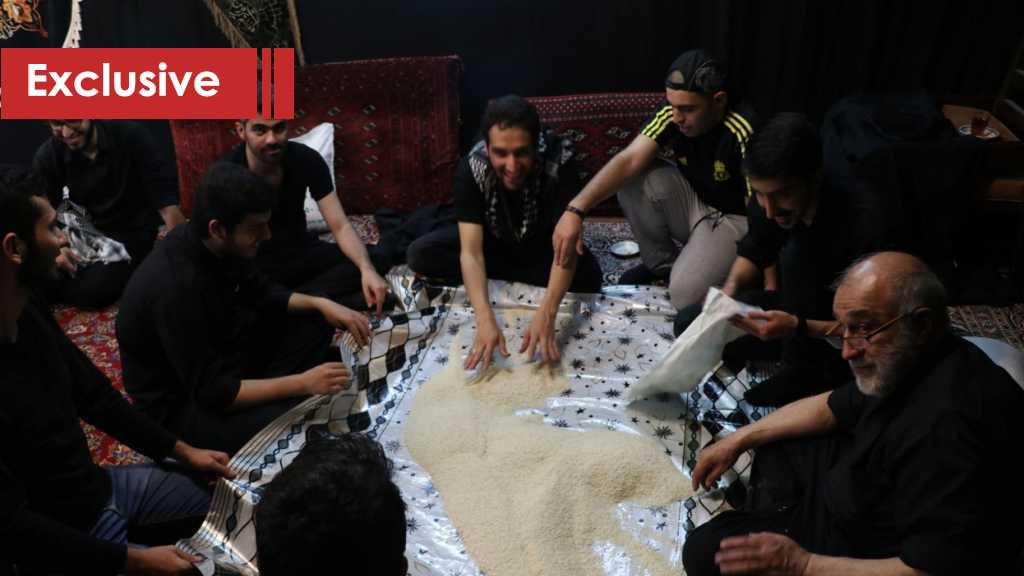 The commemoration of the Ashura during the Islamic month of Muharram and the martyrdom of Imam Hossein and his 72 companions who were all martyred [in 680 C.E] is annually honored by Muslims around the world. Refusing to pay allegiance to the caliph who was famous for being corrupt, the caliph’s army was sent to kill Imam Hussein and his companions, including his 6-month old infant and all the women of his household were taken captive to Damascus from Iraq’s Karbala.

Processions and the commemoration of the annual memory differ from one place to another, with many elements being common as well.

One of the major manifestations of Ashura in Iran is called the Heyat, literally the mourning group or gathering.

A Heyat is a basically based on a social movement in every neighborhood that is self-funded. Each group of friends, relatives, neighbors, or neighborhood young and old, set up its own establishment for the processions and ceremonies during the month of Muharram known as the Tekyeh, literally a venue where the mourners gather for the event.

In former times, Tekyehs were places for visiting pilgrims to stay. Howeverm today these have become specific places for mourners to congregate and participate in the religious gathering. Every Heyat has formed something called a Dasteh, literally a cluster.

These Dasteh groups head to the streets starting the eighth night to parade on a specific route throughout the city or town to show grief; they resonate loyalty to Imam Hussein. Passersby and people on the streets sometimes follow the Dasteh, which chants mourning songs and elegies. Robust beat of drums and a few other instruments such as trumpets are heard as people cry to the songs and men in black rhythmically beat their chests without causing self-harm and showing grief.

Sajjad, member of a particular Heyat called Tarighol Shohada; literally meaning the path of martyrs, belongs to the Heyat since he was 13 years old. Today, Sajjad is 21 years old.

He says Heyats in Iran come part of a social activity that is self-funded. So for instance, everyday a few young men or one of the members provides money for the dinner served for free for the love of Imam Hussien [known as Nazri]. He also added that since the early morning hours, members of a Heyat come together to start preparations for the night congregation, inclusing preparing food, cleaning the venue, and making sure everything is in place.

Sometimes in more public processions, there are wealthy benefactors who sponsor the event. However, local Heyats are locally funded from the people.

Nazri [stemming from the Arabic word, Nazr] which literally means ‘offering’ is actually a form of a religious commitment that the person has vowed to fulfill when his prayers are heard. People make a spiritual vow to do acts of goodness, like feed the poor, visit holy shrines and give alms if their prayers and wishes come true. Other times, people participate in Nazri for the love of Imam Hussein and not for any other reason, which is the case in many of the local congregations and groups.

The Tekyeh is usually a basement, a house, a tent, or other place of congregation that is decorated with black cloth, embroidered flags and charts, as well as paintings sometimes. Before the 1st of Muharram, one of the members which is a descendent of the Prophet and Imams known as Seyed opens the box or bag in which all the ornaments and equipment of the annual ceremonies are kept. Then all the members decorate the place and start preparations to receive the annual memory. However, only a Pirgholam, a Farsi word for old servant of Imam, hangs the flags used in the ceremonies.

People come to join a Heyat to show grief and also keep the memory of Imam Hussein alive.

Grief is the normal, human response to a significant loss. Every relationship holds a special and unique significance to us as humans.

According to Ali, another member of the Heyat, “to fully interpret our grief response we need to understand what the relationship brought to my life and therefore what has been lost from my life.  We grieve the loss of one of our parents usually with so much pain because we are directly attached to them and they are parents.  Each made a contribution to our lives. So imagine what grief would be like if the person we relate to is the foremost role model that we look up to. He preserved Islam for our sake and sacrificed his life for our sake!”

Sajjad, Ali and their friends believe that the Heyat is the sole place where they can express grief, pay commitment to Imam Hussein, help in strengthening integrity among society members and remember why Imam Hussein was martyred; to save humanity.