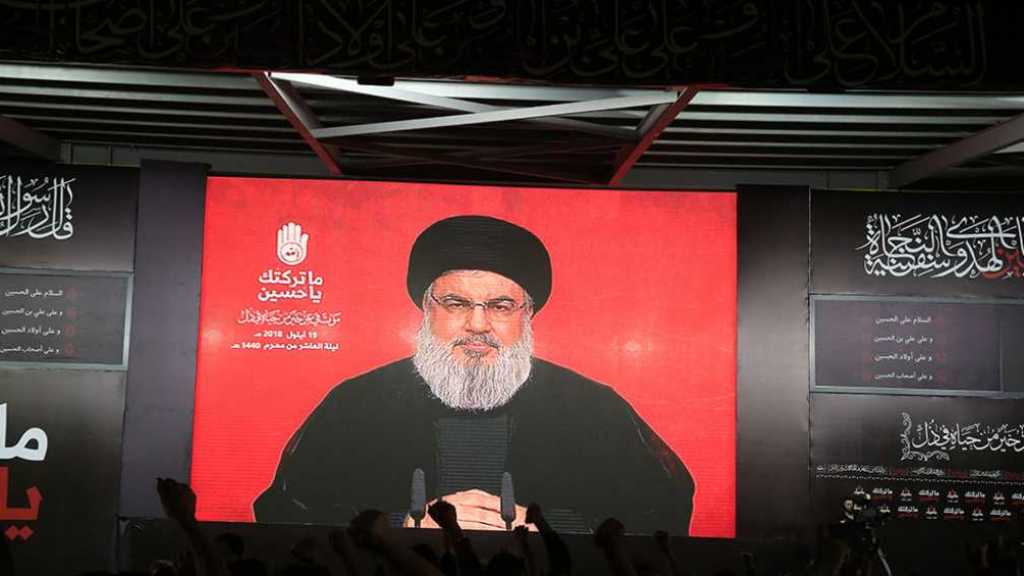 Hezbollah Secretary General His Eminence Sayyed Hassan Nasrallah delivered on Wednesday a speech in which he tackled various Lebanese, regional and international topics.

Addressing tens of thousands of mourners commemorating the 10th night of Muharram, Sayyed Nasrallah thanked the Lebanese Army and security forces and all those who contributed to providing the security environment for Ashura.

“We-in Hezbollah-look to the American administration as an enemy while some in Lebanon view it as an ally,” His Eminence stated.

Addressing America's allies in the region, Sayyed Nasrallah asked: “Does strengthening of  US in sake of “Israel” all over the time moves in the interest of the peoples in the region?”

He further asked the Lebanese who oppose Hezbollah’s stance towards the US administration if they have any evidence to prove that it is a friend of our country.

Sayyed Nasrallah went on to ask: “Is America a friend of the Palestinian people as it fights them to deprive them of their right to have their own state? Didn’t the US bring the terrorist takfiri groups into our region to destroy it? Is this in the interest of the people in the region?”

He further slammed the US administration and particularly its National security Advisor John Bolton for threatening the International Criminal Court if it acts against the apartheid “Israeli” entity.

Meanwhile, Sayyed Nasrallah cautioned that the US administration is pushing for the naturalization of Palestinians to serve “Israel's” interests. “Who’s in favor of a demographic change in Lebanon and Syria? We are before countries and political forces who are obstructing the return of refugees.”

“The real ruler in some Arab and Islamic countries is the American ambassador,” Hezbollah Secretary General stressed.

According to His Eminence, “The US support has prolonged Daesh’s [Arabic Acronym for the terrorist “ISIS”/”ISIL” group] presence in some areas in northeastern Syria. Daesh militants are being transferred to Afghanistan, Pakistan, Egypt and Yemen via US helicopters.”

“The US threatens the people of the region by imposing sanctions on them,” Sayyed Nasrallah reiterated, pointing out that “Saudi Arabia started the war on Yemen and announced its objectives, with the US support and assistance.”

In parallel, Sayyed Nasrallah warned that the US is the real problem in the region. “Even “Israel” is a tool for the US schemes.”

“The US interferes in all the internal affairs of the countries, even in the affairs of world powers such as Russia and France,” he said advising all those who want to deal with the US administration as an enemy to pay attention and be cautious.

On the internal Lebanese front, His Eminence viewed that “dissociating ourselves and our country from what is happening in the region is a serious controversial issue in Lebanon.”

“The events in the region are critical for the Lebanese people,” Sayyed Nasrallah confirmed, highlighting that “Lebanon cannot be separated from what's happening in the region.”

He also wondered: “Isn’t  the deal of the century and the way the US administration is addressing the issues of Palestine implicating Lebanon?”

“All political parties in Lebanon intervened in the Syrian crisis according to their capabilities,” he added, calling the Lebanese “before convincing yourselves, you must convince Daesh and al-Nusra that the events in Syria and Iraq are internal affairs.”

To the Lebanese, Sayyed Nasrallah said: “The fate of Lebanon is made in Lebanon and in the fields of the region.”

“Had Daesh seized control of Syria, what would have Lebanon's fate been?” he questioned, announcing that “this year, we’ll witness the end of Daesh.”

Welcoming the Turkish-Russian agreement to create a buffer zone in Idlib, His Eminence described it as “good, reasonable and subjected to results.”

The Resistance Leader also announced that “Hezbollah will stay in Syria for the fight against terrorism as long as Damascus needs it.”

“No one can force us out of Syria... We will stay until further notice. We’ll stay there after Idlib’s agreement,” he stressed, adding, “Our presence there is tied to necessity and to the consent of the Syrian leadership.”

Sayyed Nasrallah underscored that “with the accord reached over Idlib, and if everything is done correctly, we can suppose that Syria will head towards a great calm, and in concrete terms there will no longer be front lines.”

On a related context, His Eminence confirmed that “the continuous “Israeli” aggression against Syria is being carried out under various excuses.”

““Israel” is working to prevent Syria from possessing missile capabilities that achieve a balance of deterrence,” he added, noting that “ the “Israeli” claims that Iran is arming Hezbollah in Latakia are totally baseless.”

Hezbollah Secretary General further highlighted that “a lot of “Israeli” attacks on Syria have nothing to do with arms transfers to Hezbollah. These attacks are linked to the failure of the US-Saudi scheme in the region.”

Meanwhile, Sayyed Nasrallah declared that “the “Israeli” attacks on Syria are no longer tolerable and must come to an end.”

Regarding the deadlock in the Lebanese internal front, His Eminence said that everyone is talking about the seriousness of the situation in Lebanon. “Obstruction and paralysis are engulfing the cabinet formation process and no solution is looming in the horizon,” he stated.

Hezbollah Secretary General also urged the Lebanese sides to restore to calm and to resolve the controversial issues via communication and wisdom.

“No one can eliminate anyone in Lebanon and we must preserve the atmosphere of dialogue and calm,” Sayyed Nasrallah emphasized.

On another level, Sayyed Nasrallah renewed his party’s commitment to all aspects of its electoral program, on top of which is the fight against corruption.

“Those who conspire against our region, such as “Israel” and America, and all their allies will not recognize their defeat and our victory,” he mentioned.

Moving to Hezbollah’s internal arena, His Eminence  said that Hezbollah is under pressure such as the threat of war. However, he assured that “this is closer to the psychological threat than the actual one.”

“Among these pressures are threats of death, war and financial pressure,” Sayyed Nasrallah predicted.

However, according to the Resistance Leader, the most dangerous threats are related to the psychological warfare.

“Suffering failure in the military and security war, the enemies resorted to an attempt to strike us from within. All of this propaganda aims at distorting Hezbollah’s image and credibility,” he cautioned, noting that “our confidence in ourselves, path, resistance and party must be great.”

Sayyed Nasrallah concluded by saying: “The resistance in Lebanon is the front line for scoring victories in Lebanon and the region. Those leaders, men, officials and incumbent environment are the ones who kicked ‘Israel’ out of Lebanon and made the first Arabic historical victory.Hezbollah's youth were the ones who took part in repelling the biggest catastrophe that would have occurred in Lebanon and the region. Weren’t for those who are being verbally attacked today, Daesh would have been in your homes and destroyed your sanctities.”