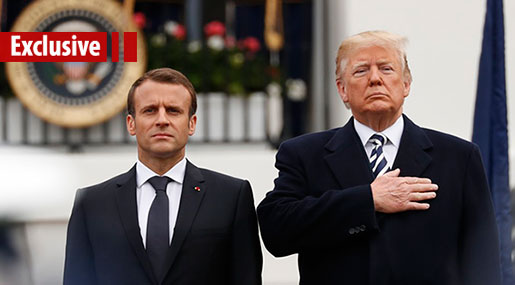 Emmanuel Macron's three days in Washington this week were apparently more than enough to help him realize that Europe's supposed goal of preserving the Iran nuclear deal was unattainable. 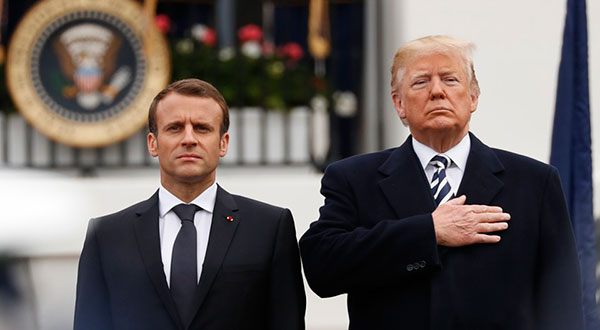 While the mainstream media talked about the ‘bromance' between U.S. President Donald Trump and his French counterpart and aired videos of Trump brushing dandruff off of Macron's suit, the real consequence of their get-together appeared to go relatively unnoticed.

After just a few hours with Trump, Macron recognized the need for a ‘new nuclear deal' with Tehran. Translation: Trump is right in trying to torpedo the existing one.

During a White House press conference, Macron outlined the four pillars that would make up the new agreement, which would encompass what he described as Iranian "regional activities".

"Syria is part of the fourth [pillar]," the French leader explained as Trump tapped him on the back. "This is the only way to preserve sovereignty in the region and provide peace in the long run. Otherwise, we will have to come back into the region."

Although some experts maintain that the French leader's ‘flexibility' persuaded Trump not to scrap the deal altogether, Macron's true role was never really about lobbying anyone in Washington. Instead, he is tasked with helping the Europeans embrace the bitter American narrative on the nuclear deal.

Naturally, Iran's leadership has already rebuked the idea of rewriting the 2015 international agreement. Now it is time for the U.S. and Europe to jump into their traditional roles of ‘good cop, bad cop', in an effort to intensify the Western offensive against Tehran.

According to the ANSWER Coalition's Richard Becker, the West's pursuit of a new deal is laying the groundwork for a "very dangerous situation."

"If we don't see efforts going in the direction of an agreement, then they are going to go in another direction and that direction inevitably almost always leads to war," Becker opined.

Few can offer any kind of tangible argument to suggest that Iran is not a real geopolitical threat for Washington's interests in the region. Through the fog of the U.S. invasion of Iraq, the 2006 "Israeli" attack on Lebanon, and the subsequent Western-fuelled bloodbaths in Syria and Yemen, Iran emerged as a dominant regional powerhouse.

These developments have awakened the aggressor's reflex in Washington. And nowhere is this more apparent than in Trump's White House, where the newly assembled ‘war cabinet' testifies to just how real the danger of an armed confrontation between Iran and the US is.

Earlier this year, Trump fired his secretary of state, Rex Tillerson, who believed in preserving the nuclear accord. In his place, he installed Mike Pompeo, who in 2014 downplayed the costs of bombing Iran and claimed that it would take "under 2,000 sorties to destroy the Iranian nuclear capacity."

Shortly after Tillerson's ouster, Trump appointed John Bolton as his national security advisor, whose hobby appears to be promoting war with Iran.

And then there are Trump's friends abroad. Chief among them are "Israel's" Benjamin Netanyahu and the Saudi Crown Prince Muhammad Bin Salman - both of whom share the White House's hostility toward Tehran.

When it comes to the nuclear deal, London-based political commentator Adam Garrie believes that the U.S. "is being pushed around by the one country in the world that is able to do so and that of course is the Zionist regime in Tel Aviv."

"When you listen to the speeches about the JCPOA [Joint Comprehensive Plan of Action] that Trump frankly stumbles through, they are a word-for-word Xerox duplicate of the things said by officials in Tel Aviv. It's as though they are two sides of different mouths but speaking with the same exact tongue," Garrie adds.

Equating the Iran nuclear deal with the appeasement of Nazi Germany in 1938, "Israel's" Avigdor Lieberman told the Saudi newspaper Elaph earlier this week that Tel Aviv would not tolerate an Iranian presence in Syria, "whatever the cost."

"Every military outpost in Syria in which Iran seems to be trying to dig in militarily, we will destroy," he said.

Lieberman is echoing threats by numerous "Israeli" officials and media outlets in recent months that are also warning of another war with a key Iranian ally - Hezbollah.

But despite repeated "Israeli" attacks against targets in Syria, the perfectly legal Hezbollah and Iranian military presence in that country remains undeterred in its fight against Western, Saudi and "Israeli"-backed terror proxies.

Are Trump & Co. biting off more than they can chew?

Whatever the military capabilities of the West, "Israel" and the Arab monarchies in the Persian Gulf, Iran is a far more formidable foe than any country Washington has dared to attack over the last few decades.

The Iranian military has at least four batteries of the Russian-made S-300 PMU-2 long-range surface-to-air missile system deployed across the country and placed on combat duty. It is also in possession of a self-developed version of the S-300, known as the Bavar 373.

Another impressive aspect of Iran's armed forces is the country's diverse arsenal of ballistic missiles - the most powerful of which includes the Shahab-3B that can easily hit targets as far away as "Israel" with its 2,000-kilometer range.

Meanwhile, Iran's conventional forces number over half a million in active personnel, 350,000 in reserves, and include 1,500 tanks, as well as over 340 aircraft.

Whatever they lack in technological advances, they make up for with fiercely motivated troops. And with the help of the remainder of the resistance axis, Iran would be able to target American military installations anywhere in the Middle East.

Washington's response to these daunting challenges came in the form of the recently unveiled hawkish Nuclear Posture Review (NPR) that expanded scenarios in which smaller-yield nuclear warheads can be used.

Trump hinted at as much when he told reporters during his joint press conference with Macron this week that Iran "will pay a price like few countries have ever paid."

Author and political scientist Kaveh Afrasiabi describes the U.S. president as being "foreign to the language of international diplomacy and persuasion."

"Mr. Trump, with his empty threats against Iran, should know better than to try to bully a proud Iranian nation," Afrasiabi warns.

Although Trump's threats should not be ignored, for the time being at least, the Americans are more likely to stick to trying to soften their target through hybrid warfare - sanctions and subversion.

Recognizing the potential for further turmoil in the Middle East, Iran's Foreign Minister Mohammad Javad Zarif made an appeal on Tuesday for a ‘regional dialogue forum' while speaking at the UN Headquarters in New York.

"We need to have a strong region, not to be the strongest in the region... time to break with [past conflicts]," Zarif said. "The era of hegemonic influence is long gone."

It remains to be seen to what degree, if any, Iran's neighbors will appreciate Zarif's genuine attempt at reconciliation.

But one thing is certain; an armed confrontation between the U.S. and Iran is always likely. If Trump pulls out of the nuclear accord on May 12, that likelihood will only increase.