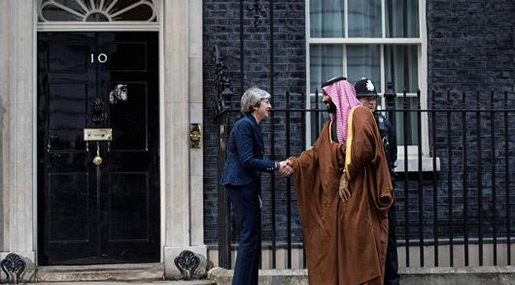 Saudi Arabia's crown prince and the UK's prime minister launched an economic and investment partnership worth billions of dollars on Wednesday, amid human rights protests in London and political pressure in parliament.

Saudi's Crown Prince Mohammed bin Salman is in the UK for a three-day state visit. On the first day of the trip, he dined with Queen Elizabeth II at Buckingham Palace and met Prime Minister Theresa May and her ministers in Downing Street.

There, the prime minister and MBS as he is known, hosted the inaugural meeting of the "UK-Saudi Arabia Strategic Partnership Council," a trade and investment body that hopes to see multi-billion deals between the two kingdoms.

"The meeting agreed a landmark ambition for around £65 billion ($90.3 billion) of mutual trade and investment opportunities over the coming years, including direct investment in the UK and new Saudi public procurement with UK companies," a Downing Street spokesperson said in a press release.

"This is a significant boost for UK prosperity and a clear demonstration of the strong international confidence in our economy as we prepare to leave the European Union."

MBS' visit comes at a time when all eyes are on the heir to the Saudi throne to see what direction the Middle East superpower will take.

Hundreds of human rights protesters gathered outside Downing Street Wednesday demonstrating against the UK's arms sales to Saudi Arabia and its bombardment of Yemen - a country experiencing a humanitarian disaster due to the war, which is seen as a proxy war between Saudi Arabia and Iran - as well as human rights abuses.

Protesters chanted "Hands off Yemen - stop the bombing now" and said the crown prince should not have been invited.

May defended herself when questioned by her political opponent, Labor leader Jeremy Corbyn, at the weekly "Prime Minister's Questions" session in parliament.

Asked whether Bin Salman should have been invited to the UK, May said the two countries had a historic relationship and one which had helped to potentially save hundreds of British lives - presumably because of anti-terrorism intelligence shared between the countries.

Michael Stephens, Middle East research fellow at the Royal United Services Institute for Defense and Security Studies (RUSI) in London, said that the trip was designed to show that there was more to the UK-Saudi relationship than arms and oil.

The Downing Street spokesperson insisted May had raised the issue of Yemen with the crown prince.

On Thursday, the crown prince will attend a business conference in London before travelling to the prime minister's country residence, Chequers, in Buckinghamshire outside London, before returning to the capital.