The virtual world was in an unusual state on the evening of February 11. The Islamic Resistance leader lurked activists on Facebook and Twitter. The revolution of Hizbullah Secretary General's admirers and fans had enthroned Sayyed Nasrallah's photos on Mark Zuckerberg and Jack Dorsey's empires. 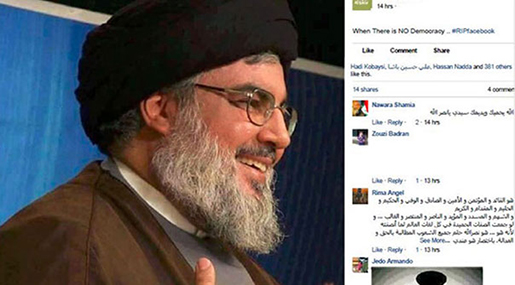 Yesterday, social networks were on a date with a "Facebook Uprising [Intifada]" that was reflected on Twitter. Recently, Facebook had blocked images of Hizbullah's Secretary-General and imposed a 24-hour-block, a 3-day-block and even a 1-month-block on accounts that posted his photos.

Activist and journalist Hamza al-Khansa told al-Ahed News website: "We use Facebook to deliver our political and resistant image, voice and viewpoint. They, on the other hand, are trying to transform Sayyed Nasrallah's image into a threat on every activist who posts on Facebook. We, therefor, broke the barrier of fear they tried to impose; they prevented us from posting photos of Sayyed Nasrallah and banners of the Resistance, while at the same time Facebook was overflowing with images of terrorists like al-Baghdadi and al-Joulani in addition to banners of al-Nusra and Daesh which were freely posted."

Mohammad Dakdouk, another activist, cites Sheikh Ragheb Harb's slogan: "A position is a Weapon..." He adds, "We are freedom fighters in this virtual world. My Facebook account has been blocked for 24 hours because of a photo of Sayyed Nasrallah in a post. As soon as it was unblocked, I immediately posted another photo of Sayyed Nasrallah with the following as a comment: "A position is a Weapon". Accordingly, my account was blocked again for 3 days."

Tansiqiya launched the idea of #ResistWithAPhoto [#ÞÇæã_ÈÕæÑÉ the Arabic for the Facebook campaign]. It is a virtual network where young people meet to endorse the Resistance awareness. Hamza al-Khansa says," we decided to take a stance. We did not aim to change the rules of Facebook nor pressure Mark Zuckerberg. We realize that this is very difficult; we just wanted to say that even if our accounts had been blocked for days or more, we will continue to post pictures of Sayyed."

He went on to say, "two days prior to the #ResistWithAPhoto campaign, we launched a page named "event" to promote the campaign. But Facebook blocked the page in less than 24 hours. Accordingly, we compensated that with a wide range of posts and photos which called the public to participate in posting photos of Sayyed Nasrallah. It was agreed upon that the hashtag on Facebook would be as follow: #ÞÇæã_ÈÕæÑÉ and #RIPfacebook on Twitter. However, the Facebook hashtag went viral on both social networks."

Activist Ali Basha asks, "Why should we accept the idea that Sayyed Nasrallah's photos be treated as violation? Why should we be labeled as terrorists given the fact that we are represented in the parliament by ministers and deputies?"

Activist Mohammed Dakdouk opines that "Some say that this action does not work because Facebook works on servers that automatically block the images. But when the servers deal with such a large quantity of images at one time, then the Facebook administration would notice that something is going on."

Regarding the results, Dakdouk says, "We did not expect this number and effectiveness in participation from the public, the campaign has been a huge success." Al-Khansa indicated, "We have been able to break the equation they were trying to impose on us by silencing the voice of the Resistance. The response was broad and very significant; Sayyed Nasrallah's photos flooded Facebook yesterday."

Al-Khansa draws attention to a post of one Facebook user yesterday, "We cannot give up from posting photos of Sayyed Nasrallah and fight for it, so how can we accept abandoning the Resistance's weapon?". He says, "The public of the Resistance is much aware, all we have done is trigger this awareness; we consider that our message has been received."

For his part, Basha considers that "people had a massive reaction since the matter tackled photos of Sayyed Nasrallah personally. What we have done is made an overt stance objecting the attitude of Facebook towards us." He further stresses that "the public was of the consequences: to block or delete the Facebook account, but it decided to confront the odds by implying: ‘if Sayyed Nasrallah's photos tease you, then let Facebook be flooded by them!'"