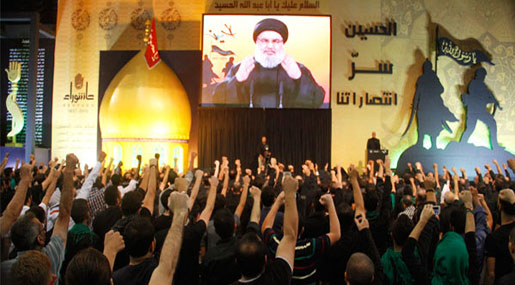 In a speech His Eminence delivered at the first night of Ashoura, Sayyed Nasrallah declared Hizbullah's unwavering support to all forms of Palestinian resistance.

He further declared that Palestine remains the central battle in the region.
"What we are witnessing today in Occupied al-Quds and the Al-Aqsa Holy Mosque is a new intifada, a third intifada," he said, adding that "the Palestinian people over the past few weeks have shown a high level of courage, defiance and determination."

In parallel, His Eminence reiterated the party's full support for the Palestinians and called for a worldwide support against the "Israeli" occupation.

On this level, Sayyed Nasrallah stressed: "We in Hizbullah announce our support for the resistance of the Palestinian people," he added, emphasizing that all forms of resistance were legitimate.

"The Palestinian people have demonstrated creativity in the resistance to fight the most powerful armies," Sayyed Nasrallah said.

In another context, the Resistance Leader lashed out at Saudi Arabia for its "incompetence in handling the Hajj pilgrimage for this year," in which a deadly crush occurred during the rituals in Mina, near the holy city of Mecca.

He said the tragedy reflected the extent of Saudi officials' disregard for Muslims' holy sites and the Hajj pilgrimage.

Riyadh even "did not apologize for the incident, but it released a statement in which it hailed the managing of Hajj for this year," he said, adding that "this tragedy in the holy country, in the holy month shows Saudi's ultimate disrespect to Muslims and Islamic rituals."

"The only loud voice against the Saudi performance was by Imam Sayyed Ali Khamenei," the Leader of the Islamic Revolution of Iran, he added.
Moving to other regional topics, he also referred to the status quo in three Middle Eastern countries, namely Syria, Yemen, and Bahrain.

He hailed the Yemenis' bravery and steadfastness against the Saudi aggression on the impoverished country and called the current war in Syria a "universal" war.

Sayyed Nasrallah also slammed the crackdown carried out by the al-Khalifa brutal regime against the Bahraini people in the Persian Gulf island state.

On the internal front, Sayyed Nasrallah denounced the ongoing paralysis of state institutions, the Arsal hostage crisis and the waste crisis.

"All attempts to revive the government were foiled for personal and partisan reasons, which clearly means that we will face a more complicated situation."
However, he expressed a level of optimism over the ongoing political dialogue and relative security in the country.