It is the second time Sayyed Hassan Nasrallah sets Galilee as an inevitable target for the Resistance's field operations in case "Israel" attacks Lebanon.

As soon as he declared Galilee a target during any likely confrontation with the enemy, analyses and anticipations about the scenario and scene of the military battle with "Israel" started to stream.

Then why does advancing into Galilee frighten the Zionists?

A hypothetical tour d'horizon in Galilee might help answer this question: 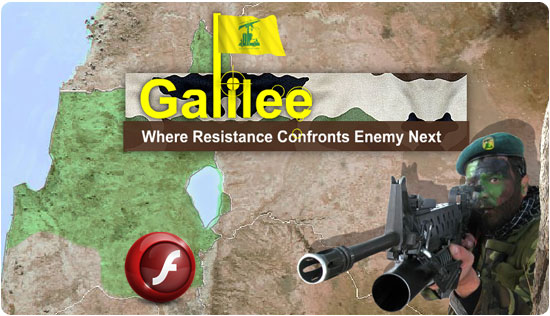 According to the scenario of the likely confrontation, whoever takes over Galilee is automatically able to take over South Lebanon and plains surrounding Tabaria (Tiberias) Lake, and vice-versa; liberating any part of Galilee via the Lebanese territories shall petrify "Israel" since most of the settlements are built nearby the Lebanese borders.

The Resistance is capable of penetrating the enemy and easily reaching Galilee, something that the "Israelis" have taken into account in any likely confrontation with Hizbullah. Building on this, the occupation authorities evacuated in 2006 northern colonies despite the well immune and equipped shelters.

In 2006, specifically in Bint Jbeil, the Resistance was besieged after the Zionist soldiers attempted to lure combatants and drag them out of the area; Hizbullah reinforced its presence in the city and brought in more fighters, hence putting the enemy in such a difficult situation.
This might be just an example of what the Resistance can do if it advances into Galilee.

The recurrent "Israeli" maneuvers focus on two factors: the human capacity and the speed of deployment in the battlefield, in preparation for the next war with Hizbullah. This is what the Resistance is working on to, perhaps, snare the Zionist soldiers.
For the "Israelis," it is more likely to drag the Zionist soldiers into the Lebanese territories so that Hizbullah pounces them down and hence has the balance swinging its way.

Expectations of the military experts indeed show that "Israel's" air force is at jeopardy. There are also talks about a supremacy for the Resistance in maintaining its missiles arsenal unscathed, in addition to an ability to control it and transfer it under any pressure or shelling.
In an early reaction to the threats of Hizbullah Secretary General Sayyed Hassan Nasrallah to target specific facilities in "Israel," Prime Minister Benjamin Netanyahu ordered the army to fortify the vital energy utilities, among which power-generating systems, water desalination and pumping stations, and oil reserves stocking facilities. Worth-mentioning, natural gas and charcoal used in producing electricity also get to "Israel" via the sea.

If war erupts, "Israel" is expected to fall short of oil and coal sources. It is also expected that pumping gas through maritime fields stops. Therefore, "Israel's" economy will then have to depend on reserves which exist in the occupied lands. Moreover, one of the two oil refineries in Haifa and Ashdod might be hit. Zionist observers thus recommend to increase oil reserves special to the military institution and to arrange the maritime transportation of oil in case of emergencies.
As to water, the enforced law in "Israel" coerces the "Israeli" authorities to preserve quantities of waters for the times of emergency, including drinking water as a provisional solution in case water central desalination and pumping stations were damaged.