On the 6th anniversary of the Divine Victory which was achieved by the Islamic Resistance in Lebanon in July 2006, Hizbullah held a central ceremony in the Beirut Southern Suburb's al-Raya field on Wednesday, the 18th of July. 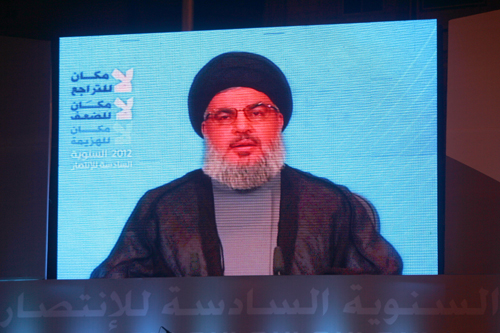 Following verses of the Holy Quran, the Lebanese and the Hizbullah anthems, Hizbullah Secretary General His Eminence Sayyed Hassan Nasrallah appeared via video-link to deliver a speech on the occasion. The ceremony was held under the slogan "No place for Retreat, No place for Weakness, no Place for Defeat".
Sayyed Nasrallah welcomed and thanked the audience who has come to celebrate the ceremony marking the 6th anniversary of the 2006 July victory, stating "brothers and sisters, there are many issues I would like to speak about, but regional developments, particularly in Syria and what happened today, forces me to set aside part of my speech and tackle the regional developments."
Before tackling the violence that hit Syria, Sayyed Nasrallah went in a flashback to one of the most important events that took place during the July war in 2006. His Eminence revealed one of the Resistance's major achievements, one which was never mentioned during the past years.

"On the 6th anniversary [of the 2006 July victory], the "Israelis" who have been holding seminars and discussions involving high-ranking leaders acknowledge the defeat, and are still in shock over the 2006 defeat," His Eminence said.
"For us, it is enough to recall that the head of the "Israeli" Mossad in 2006 [Meir Dagan] telling "Israeli" Prime Minister [Ehud Olmert] that the July victory was a national catastrophe during which "Israel" received a decisive knockout", Sayyed Nasrallah iterated, recalling other stances of "Israeli" officials who admitted that the "Israeli" entity was harshly defeated during the July aggression it had launched against Lebanon.

Sayyed Nasrallah noted that "Israel" was maneuvering and had declared an important operation dubbed "Qualitative Weight Op" on Friday the 14th of July 2006.

"The "Israeli" mini-cabinet met to discuss the operation, where they proposed collecting accurate information on Hizbullah's missiles and their launchers and platforms. The War Minister at the time said that they conducted maneuvers in the past years to shell these missile launchers and platforms. He told the mini-cabinet that if this operation was approved, Hizbullah will not be able to fire long and medium range missiles at "Israel"," Hizbullah Secretary General noted, adding "An hour after this operation was approved, more than 40 warplanes launched their attack and targeted what the "Israelis" said was more than 40 rockets. In 34 minutes, the operation was finished, and all the targets that were said to be Fajr 3 and Fajr 5 rocket launchers were hit. "Israeli" Official Halutz called [Israeli Prime Minister Ehud] Olmert telling him: We won. The war is over."

Sayyed Nasrallah Went on to Say "On the second day, "Israeli" [President Shimon] Perez declared that "Israel" triumphed and that Hizbullah SG fled to Damascus, even though I was still in the Beirut Southern Suburb."
He noted that the "Israelis" discussed the extensive security effort they did maneuvering and gathering information and allocating huge budget to achieve what they compared to the 1967 war when "Israeli" warplanes targeted a major part of the Egyptian aerial arms, adding that the "Israelis" remained to believe what Halutz had said, that "Israel" destroyed 60 to 70 percent of Hizbullah's missile capabilities.

Revealing the truth, Hizbullah SG pointed out "The Resistance found about the enemy's intention [to bombard] the missile launchers and platforms, and played along and even helped them collect information."

"Owing to the bright Security mind of Haj Imad Moghnieh and his brethren, the first security achievement was achieved, when the Resistance knew that "Israel" knew where the platforms were located," Sayyed Nasrallah underscored, adding "The second achievement is that the Resistance was able to change the location of the launchers and platforms without allowing the "Israelis" to find out. These [platforms and lauchers] were transformed to other places the enemy did not know. When "Israel" made the decision to execute the attacks, most of the locations bombarded were empty; the platforms were allocated and were ready to attack Tel Aviv."

"The operation [Israel] dubbed as the Quantitative Weight, we call the Quantitative Illusion, and more than 70 to 80 percent of the Resistance capability was ongoing until the last day of the July war," Sayyed Nasrallah highlighted. He went on stating "When [Israel] realized the next day that their operation failed, War Minister Dan Haltuz told the mini-cabinet that it seemed "Israel" became involved in an operation that may last for weeks and then "Israeli" President Shimon Peres swallowed his tongue, he still does today." 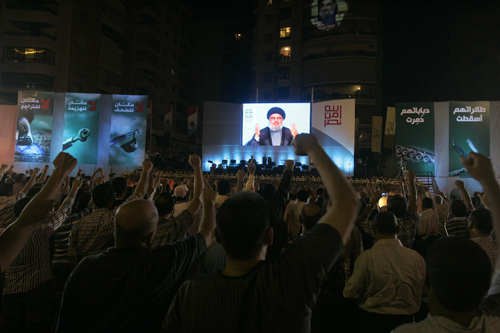 Sayyed Nasrallah added "We know that the "Israelis" collect information about us and that it is preparing to attack us. We know what [their] first attack would be in the next war. We will surprise you when you make your first attack. We promise the "Israelis" of a big surprise. Assuring further victory, Sayyed Nasrallah said "Be very confident that amid all this noise there is a resistance and resistance fighters who are working night and day on the issue of the conflict with the enemy and they are not being distracted by any shouting from here or there. We were victorious in 2000 and 2006, and we can achieve better victories in any war."
"We know what your first strike will be and we promise you a big surprise and of course I want the Lebanese people and all the peoples to be very confident in the Resistance's capabilities and to know that in this region we have the heart and will to organize, manage, fight and eventually win, Our fate is not defeat and failure like most Arab rulers claim," His Eminence reiterated.
Sayyed Nasrallah moved on to another point, highlighting that the "Israelis" had then moved on to evaluate along with the Americans what had happened. The July war was supposed to be a war to crush the Resistance in Lebanon and destruct the Resistance axis in the region. His Eminence assured that the second thing "Israel" would have done was to overthrow President Bashar al-Assad's regime and destroy Syria under the claim it had helped the Resistance. Yet, the Resistance's victory prevented such from taking place.
"I tell you today, if there was solidarity in Lebanon and if some daggers were not placed in our backs during the last days of the war, political negotiations would have been achieved on the national level. But there were some helping "Israel" on the political level to get [Israel] out of the crisis it placed itself in.

According to Sayyed Nasrallah, Former ""Israeli" Defense Forces" chief of staff Moshe Ya'alon said: It was clear that Hizbullah was a fixed phenomenon that could not be crushed through a military operation and that there is no reason for a conclusive military solution to Hizbullah's [arms]. This is why I encouraged a political action to disarm Hizbullah [through] a domestic Lebanese operation.

Hizbullah SG went on adding "Ya'alon also said: I realized that there was no means to remove Hizbullah from the hearts of the Shiites, therefore, I suggested working on a political and military manner to contain Hizbullah and eventually reach the point where Hizbullah is seen in Lebanon as illegitimate."
Sayyed Nasrallah assured that the "Israelis" bet on the Lebanese domestic developments, calling on the Lebanese to wake up.

Syria, according to Sayyed Nsrallah, constitutes a real problem to the Americans and "Israelis", as they saw important development in Syria during the past phase. Military strategy, according to Sayyed Nasrallah, transferred it to a military power and made it a possible threat to "Israel".

Pointing out that "Israel" today is afraid of Gaza and afraid for Tel Aviv, Sayyed Nasrallah questioned "Who gave [Gaza fighters] rockets? The Saudi regime? The Egyptian regime? No. They were rockets from Syria and transferred through Syria. The Syrian leadership was risking its interests and existence for the sake of the resistance in Lebanon and Palestine to be strong. Show me one Arab regime that did the same."

"All Arab countires know very well what it means for Syria to give Hezbollah, Hamas and the Islam Jihad Movement weapons at a time when Arab regimes prevented food and money from being transferred to Gaza!" SAyyed Nasrallah noted, and further explained "Syria sent weapons and food to Gaza and took a risk to do so. This is Syria, Bashar al-Assad's Syria, the Syria of the martyrs Assef Shawkat, Daoud Rajha and Hassan Turkmani [who were martyred in Wednesday's violent attacks in Damascus].

"Today in Syria, there is a US-"Israeli" scheme that says it is forbidden for strong armies to exist in the region, it prevents a regional state other than "Israel" from having a strong army," Sayyed Nasrallah assured.
Hizbullah Secretary General called on the Syrian people, army, and government to maintain Syria, and highlighted that the only solution is to hold dialogue.

"We owe these prominent leaders [who were martyred today in Syria]. We offer the Syrian leadership, army and people our condolences and we condemn this attack that only serves the interests of the enemy. We have full trust that the Syrian army has the ability to remain standing."

According to Hizbullah Secretary General, "Israel's" only concern in the past years was Iran. He noted that there are dozens of Farsi television stations tasked with inciting against the Iranian people and government, iterating that these stations and [incitement] led to protests in Iran. "Everything the US and the West could do to Iran, they have done. But Iran is today 100 times stronger than it was thirty years ago and it will become stronger," Sayyed Nasrallah went on to say.

Moving on to domestic politics, Sayyed Nasrallah called for avoiding and decreasing sectarian tension and reiterated the strong relationship with the Free Patriotic Movement headed by the General Michel Aoun.
Reiterating the strong relationship, His Eminence said "We confirm our relation with FPM leader MP Michel Aoun. The alliance between us for the past six years cannot be ended by a dispute, allies [may] disagree and neither of us follows or cancels the other." 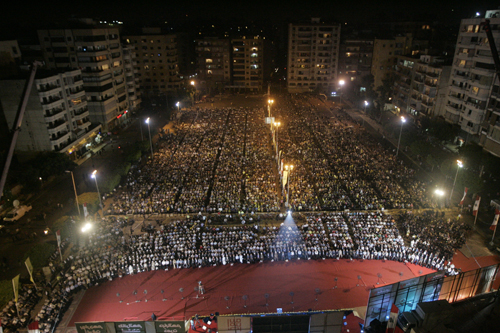 His Eminence noted that "there should be a national consensus which strengthens the army especially in face of domestic and foreign threats. But He pointed out that accusing the army of sectarianism and voicing doubt over its patriotism weakens it."
He further added "Some are paying money and inciting in the media to ruin the country, that's why we must abide by the silence of the strong and everyone knows that we are not weak, but we put the national interest above everything else. We want a strong army, but I tell the government and the national dialogue committee that to have a strong army we must first have a strong will, which means we must not fear the US ambassador or the US generals."
Calling on all to be mature, Sayyed Nasrallah assured "Today there is a lot of sectarian rhetoric and preachers should confront this. If a Shiite says something that insults another sect, we, as Shiite scholars have to stand up in his face and silence him. The Sunnis, the Christians and the Druze have to do the same."
Sayyed Nasrallah said there will always be sides in the Lebanese government who would want to unarm the Resistance, or provide the Syrian opposition with weapons, as the Lebanese government holds different parties of different opinions, iterating these should be only solve through dialogue.