July war 2006, the 33 day war "Israel" launched on Lebanon was a bitter memory in the diary of every Lebanese. "Israel" killed 1,200 civilians, one third were children.

Thousands of homes were destroyed, 50 schools were shattered not to mention the roads and bridges that turned into rubble.

Despite all that, the people were able to move on with grand perseverance. With the blessings of the mighty fighters and with the people's support the Divine victory was sowed.
However this is just the beginning of the "Israeli" belligerence. 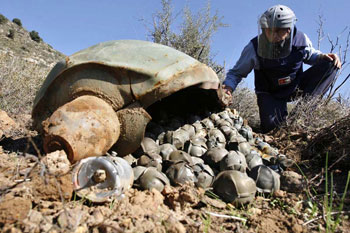 At the end of the war, "Israel" had to take revenge. It dropped around 4 million cluster bombs over South Lebanon, mostly during the last 72 hours of the war.
Around 500,000 of those munitions did not explode, and have killed or seriously injured some 213 civilians and 52 de-miners since the war ended. 98% of the victims are civilians.

The reason why many sub-munitions didn't explode, at least not
Immediately, was because "Israel" used many old stocks that went decades and decades back.

Unexploded cluster bombs are dangerous in part because their condition is unknown, they might be fully armed and ready to detonate, not armed and relatively harmless, or partially armed. If they are armed, they may or not be capable of firing, adding to their unpredictability.

When cluster munitions are dropped, the bombs can be spread intentionally or unintentionally over a large area, leaving a larger threat to civilians.

Although "Israel" discharged the largest number of cluster bombs in 2006, it used them earlier.

"Israel" used cluster munitions in its 1978 and 1982 incursions into Lebanon. The two-decade-old unexploded sub munitions from "Israeli" campaigns have continued killing and injuring civilians, with over 200 civilian casualties recorded between 2000 and 2005.

Moqawama.org had some special interview with a victim of cluster bombs in South Lebanon. 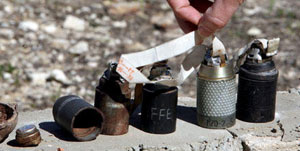 Ali Suleiman a 52 year old and father of 5, witnessed the pain of the "hidden devil" has he called it. "I was in my land in Arabsalim watering my olive trees and thinking about how much I missed my sons abroad, when suddenly I hear something explode. It was a matter of seconds and I saw blood on my hand and I could see no more. I knew I was injured badly by the "hidden devil", the cluster bomb!" he said.

He fell on the ground and the pain started in his head then down his face, "I felt like needles were being hammered in my eyes", he said.

"My wife came to check on me and found me lying on the ground, with all the blood she saw, she thought I was dead."

The doctors said that Ali was moved to the hospital on time, had he been delayed a bit more he wouldn't have made it due to the blood he lost.

Ali woke up in the hospital when he opened his eyes, he couldn't see anything, it was hard for him to absorb what was happening. He was later informed that he lost an eye and the other was injured badly and needed 3 months of treatment.

After 3 months Ali did see again, the doctors managed to save his eye. "When I came back home, I knelt on the ground and thanked God for his mercy. I thanked God for having mighty fighters that were defending us from the antagonism of the Zionists"!

Ali survived yet many others couldn't make it. Many farmers died before stepping on their land again due to the fact that it was contaminated. Many children lost the chance to run again, or write again, or even hear again. Many dreams were broken and many ambitions were stolen. These are the lives of the victims of the "hidden devils"!