For the 15th consecutive day, the Egyptian people continue to pour into the Tahrir (Liberation) square in Cairo and the squares and streets of Egypt, joining tens of thousands who spent their nights in open air, as they refused to leave the streets at night despite heavy military presence and overnight curfews.


The crowds will be addressed in the coming period by a unified leadership that was formed on Monday. Five major groups have formed "a revolutionary committee" and chosen individuals to represent them.


This morning, prominent Egyptian political analyst Ashraf Bayoumi told moqawama.org right before heading to the Tahrir square to stand along with his Egyptian brothers that the streets are never empty since the 25th of January, and will remain to be the arena of revolution until the a new regime is formed, not the same regime with new faces.
"I am heading towards Tahrir Square now, thousands are pouring to the Tahrir square because the revolution is not finished yet; and attempts to abort this revolution are ongoing from various sources," said analyst Bayoumi.


US Dual Stances to Serve Its Goals

According to Bayoumi, foreign sources have been major players in the Egyptian game. "Let me begin with the United States, Europe and "Israel". There is no question that this revolution is counter the objectives and policies of foreign dominant forces, or more explicitly, imperialism and Zionism," he said adding "We have seen how the US has been saying Mubarak  has to remain in office so that no constitutional void happens, which is nonsense."
Then, again stances emerge from the US administration supporting the revolution and describing it as pro-democratic, the analyst highlighted explaining ", it is definitely a pro-democratic movement, but it is also more important than that." 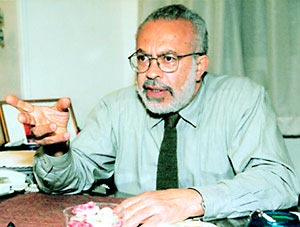 The dual stances of the US administration serve its goals, and that is why Bayoumi says the public should be aware and understand this two-face policy. "We should differentiate between public stances and real policy. This applies to the US administration issuing statements for local American and Arab consumption but in reality the intention of the US is to have the same corrupt regime but maybe with new faces. This is a colonic plan based on tourism, on services and also continuation of policies which support the American objectives and the Zionist entity," he underscored.

Egyptian Figures, Puppets of US and "Israel"

So the protestors are steadfast and holding tight onto their demands of a new regime, a just regime that will bring reform and change. That is one part of the picture in Egypt. The other is that of an alliance between the police, the portion that has been enjoying exorbitant wealth, who according to Bayoumi have gained billions of dollars, some organizations, the media, and a portion of intellectuals who have deceived the people for many years.
Bayoumi highlighted an important fact about two major figures that have emerged lately, and suddenly became pulpits to the Egyptian people.

"In addition there are Nobel prize winners like Ahmed Zuel and Mohammad Al Baradei who are cast in the same US mold, trying to bind with the revolution," Bayoumi said with rage on the Egyptians who he considers as betrayers to their people and country.

"We have to tell the people all over the world that Al Baradei has served the US imperialism for more than 12 years at the head of the International Atomic Energy Agency (IAEA). We cannot forget the scene when he met with Sharon and we cannot forget his statement that he understands the position of the Zionist state as far as its "nuclear arsenal", he has not opened his mouth once in support of the Palestinians or Iraqis until very recently."

"Zuel (prominent Chemistry scientist), who visited "Israel" and got a prize from the Zionist entity called the Wolf prize, and gave a speech in the Knesset, he is also the official employ of Obama in the middle east region for Science and technology, who also suddenly said he separates between science and politics, projected himself as a leader and issues a statement as if he is about to be in office."

On the PM caretaker government Mubarak assigned a week ago, Bayoumi said "Omar Suleiman is the person who spent a great deal of his time negotiating with the "Israelis" in Tel Aviv and the head of the security and intelligence. He is a genuine part of the regime the issue is not Mubarak alone, it is a complete system that has ruled, oppressed, and impoverished the Egyptian people and ruined the economy of Egypt and diverted the objectives of the Egyptians who aim to be an independent, developed and free state."

Therefore, there are many players who are with this corrupt regime who aim at oppressing the peole and are puppets to the US and "Israel".

Revolution to Continue Until Demands Met

Bayoumi said that today, tomorrow, Friday and every other day will remain to be days of revolution, with its primary objective to dismiss Mubarak and all his supporters who have been using various excuses like stability and avoiding violence to continue their oppression of the people.
"They (the regime and its allies) are the ones who promoted violence, released prisoners from the jails and who are instigating violence against the people as hundreds have been martyred and thousands wounded," the analyst continued.

He assured on behalf of himself and the people that this revolution is a movement for attaining freedom, justice and national sovereignty. "We are not only demanding political freedom, we are asking for boycotting "Israel", for destroying the separation wall across the Gaza borders and the sanctions against the Palestinian people, we are refusing the alliance and association with "Israel" and the United states," Bayoumi said adding "In addition we are demanding social justice, which means a new economic philosophy based on industrial development, agricultural development, using science and technology for development that is how we can combat issues like unemployment and the tremendous gap between the wealthy and the poor. This regime has impoverished millions of Egyptians, so the government of Mubarak is the last to speak about stability and security."

Bayoumi highlighted that the current regime has compromised the national sovereignty of Egypt in favor of the American interests. "Let us not forget that this regime let the Egyptian army conduct maneuvers dubbed the Bright Star with the US army. We will not forget what happened in Iraq and how the (Egyptian) regime opened its airspace and the Suez canal for the US forces that attacked and occupied Iraq, this could not have happened if it were not for a regime like that of Mubarak, who was in full support of the US and "Israel"."

He assured "The Egyptian people will never EVER accept a Zionist state in the Middle East, we are not speaking of compromises like West Bank and Gaza, and this Zionist entity must dissolve even if takes us years."

At the end, he said "The Arab people must liberate themselves from this Zionist entity which is an agent of US and European imperialism."