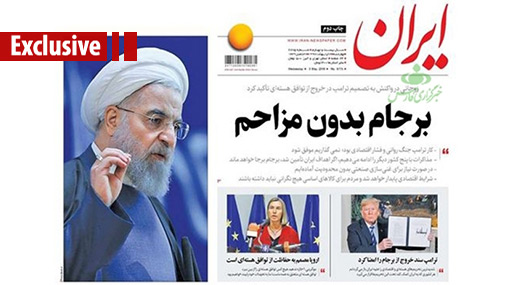 
Iranian newspapers paid attention to Trump's pulling out of the nuclear deal on Tuesday, with both sides Reformists and Principalists assuring that whether the deal will continue to see light with the EU and other players or not, Iran and the deal are better off without the troublemaker. 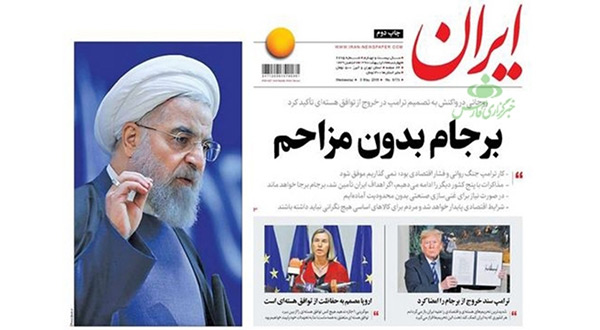 "The Coup D'état of the Foolish", "The Troublemaker Leaves JCPOA", "Eventually Nothing!" and "Tehran's Wise Decision", are a few of the titles that made newspapers' headlines on Wednesday morning. Newspapers were united in their stance on Trumps' pullout, and reassured that it is isolating itself on the international level, and stressing that Iranians and the international community can see that the US is not trustworthy.

Under the title "The Troublemaker Leaves the Nuclear Deal", reformist "E'etimad" newspaper wrote saying "US President Donald Trump has been skillfully using media propaganda against Iran and has left the nuclear deal (JCPOA) with the thought that if he does so, Iran will yield to pressure and accept his conditions. However, (Trump) does not know that Iran will never surrender to such pressures. Trump has miscalculations in mind; he thought that if he pulls out of the deal, he will be free to impose more sanctions on the Islamic Republic; the same mistake that George W. Bush did earlier..."

The newspaper highlighted that the US today is even weaker than during the time of Bush the son, especially that back then, Europe had backed the US in its decision. Today, neither the European Union nor any other country supports Trump's decision. Since European countries do not have a backbone to stand alone and due to America's economic power, they might comply with secondary sanctions. However, the US did not base its pulling out of the nuclear deal on any rationale and hence it is not able to put any pressure on Iran and is unable to disturb it."

"Kayhan Principalist" newspaper for its part said that "Trump has ripped of the deal; the time has come to set it on fire (in reference to what Imam Sayyed Ali Khamenei has said earlier)."

In an op-ed on the topic, the newspaper said that the United States had scuttled the Joint Comprehensive Plan of Action long before by breaching its articles.

"Our country's nuclear officials are still discussing whether or not to withdraw from the deal. They won't explain whether there is any JCPOA left after all that they are dubious about leaving or staying in it. The key objective of Iran's nuclear talks has not been fulfilled."

On the same note, mainstream "Etela'at" newspaper said that the US exiting of the nuclear deal brings its credibility to an end, calling it the empire of "lies". Also, "Sharq" newspaper underlined that "by his action, Trump has decided to isolate the US from the international arena," adding that "Trump's decision is not smart at all, and has delivered the US with a few setbacks."

The famous "Hamshahri" described Trump's move in a few words: "The JCPOA Stayed and the US left." The newspaper reiterated that Trump walked away with no one supporting him in his foolish decision. Meanwhile, "Arman-e Emrouz" republished a remark made by the European Union foreign policy chief Federica Mogherini, who had said earlier that the bloc would keep honoring the deal and will stick to it.

Trump's decision to quit the deal can rattle oil markets due to Iran's role as a major exporter; it could also harm Trump's efforts to reach a nuclear deal with North Korea. Meanwhile Iran, which has been an independent and self-sufficient country despite the ongoing sanctions for decades suggested its economy would not be hurt whatever happened.

"One man in one country might create some problems for us for a few months, but we will overcome those problems," President Hassan Rouhani said. "If we are under sanctions or not, we should stand on our own feet."

Iranian lawmakers have denounced US withdrawal from the 2015 multilateral nuclear agreement, introducing a motion that calls for "proportional and reciprocal" action by the government.

Parliament Speaker Ali Larijani said Wednesday morning that Trump's decision to leave the JCPOA and re-impose anti-Iran sanctions was a violation of the accord that would isolate the US. Larijani, once Iran's chief nuclear negotiator, described Trump's remarks as "crude and foolish," saying the US president's abandoning of the nuclear deal was a "diplomatic show."