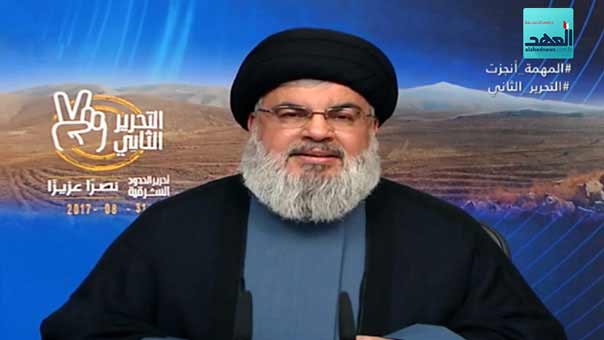 Addressing a huge crowd of people in Baalbek, Sayyed Nasrallah apologized for not being able to be among them.

"I liked to be among you in Baalbek on this glorious day, the same as I went to Bint Jbeil on May 25, 2000, but the situation after 2006 war is different, especially that the "Israelis" are angry and the US scheme is being defeated in the region," His Eminence said.

He further congratulated the people for this great victory: "This victory is that of the army, people and resistance against all terrorists, who were occupying our precious land."

39 years on the kidnap of Imam Musa al-Sadr by the former toppled Libyan regime, Sayyed Nasrallah emphasized that Sayyed al-Sadr was a man in a nation. "His cause is dear to all of us," he mentioned.

Meanwhile, His Eminence saluted Lebanese House Speaker Nabih Berri over his national stances. "He has always proven that he is the man of all challenges and the guarantee of national unity," he added.

Back to title of celebration, Sayyed Nasrallah clarified that the terrorists' control of the Lebanese-Syrian eastern border has formed a threat for both Lebanon and Syria.

As he hailed the fact that there are political forces in Lebanon that supported confrontation with terrorists on the eastern border, His Eminence unveiled that "some Lebanese were neutral towards the terror on our northern and eastern borders, some were positive towards the terrorists and offered them assistance, as other political forces chose confrontation."

"During the previous phase and because of the political division, the Lebanese state was unable to make a decisive decision regarding the military confrontation, but it did enter into a security confrontation with the terrorist cells," Sayyed Nasrallah highlighted.

Meanwhile, the Resistance Leader uncovered some aspects of the Lebanese political scene upon dealing with the terrorist groups. "Due to political divisions, the Lebanese state was unable to take a decisive decision to launch a military confrontation."

However, His Eminence added: " To be fair, the Lebanese state was engaged in a clear security confrontation with the terrorist cells and networks. The army, General Security and State Security scored very important achievements."

He also unveiled that "there was information that Daesh [Arabic Acronym for the terrorist "ISIS"/"ISIL" group] was preparing to occupy two Lebanese towns."

In this context, His Eminence went on to say "It is clear that terrorism was strongly reactivated with the beginning of spring and that the next summer will be a serious one."

Praising the sacrifices of the Lebanese army in defending and liberating the eastern borders, Hezbollah Secretary General stressed: "The Lebanese army and its leadership have done a great job and political confidence must be enhanced by the army's ability to conduct accurate operations."

However, he reiterated that Hezbollah had no problem if the Lebanese state decided to liberate Arsal's outskirts in July. "The Lebanese Army Command was ready to do the mission but there was political hesitation. So, we decided to head to liberate Arsal's outskirts. The hesitation was not due to insufficient army capabilities but rather for political considerations veiled as humanitarian considerations. Meanwhile, the state's decision to launch Operation Dawn of the Outskirts was a very significant development and represented a form of practicing a sovereign political decision."

Sayyed Nasrallah viewed that "the 2nd liberation is one of the achievements of the new presidential term represented by President Michel Aoun, the man whom I always described a brave, independent leader who does not bow or submit to any state, embassy, pressures or intimidation. President Aoun preserved the state's prestige through taking a sovereign Lebanese decision to launch the border operation."

He also thanked the Syrian leadership for its efforts in accomplishing this liberation, particularly that it bore embarrassment in sake of Lebanon.
On this level, he uncovered that he met with Syrian President Bashar al-Assad in Damascus to over the deal with Daesh to uncover the fate of kidnapped Lebanese Army soldiers.

"I headed to meet President Bashar Assad in Levant and asked him for a settlement to move Daesh militants with the aim of unveiling the fate of the kidnapped servicemen," Sayyed Nasrallah said .

Meanwhile, he urged the Lebanese state to take a sovereign decision to liberate occupied territories from "Israeli" occupation.

"We are waiting for another sovereign decision because there is Lebanese territory still under the "Israeli" occupation, the Shebaa farms and Kafrshuba hills. We call on the Lebanese state to plan for its liberation by a sovereign decision," His Eminence said.

Sayyed Nasrallah also thanked the people and the government of the Islamic Republic for their continuous support to the resistance, Syria and Iraq. "I Congratulate Iraq for the liberation of Tal Afar and announcing Nineveh province free from terrorists."

On another level, Sayyed Nasrallah explained that "Israel" was disturbed by the liberation of the outskirts. ""Israel" is concerned by the coordination on both fronts and the performance of the Lebanese and Syrian armies. "Israel" is crying its orphans in Syria," he said.

"The British-American scheme sought to modify the UNIFIL's mission in sake of "Israel" and to tighten the noose on Hezbollah," he warned.

To the people in Bekaa, Sayyed Nasrallah sent a clear message: "These borders and outskirts are the responsibility of the Lebanese army, and we never said that it's our responsibility. Your eastern border with Syria is now under Army's control. You must come together so that you mend your internal relations."

Moving to the international scene, His Eminence also described the United States as the real threat to the international community, warning that the policies of the administration of President Donald Trump vis-à-vis North Korea were steering the world towards a nuclear war.

"We must know that the other scheme in the region is being toppled, and that the American-"Israeli" dreams that were built on Daesh and its sisters are falling apart. The world must know that Lebanon is protected and anyone who thinks of attacking its territory will have his hand cut off, thanks to the golden equation," he concluded.