Ahead of Republican candidate Donald Trump's speech, hundreds of demonstrators descended on the California Republican Convention Friday to protest against him. 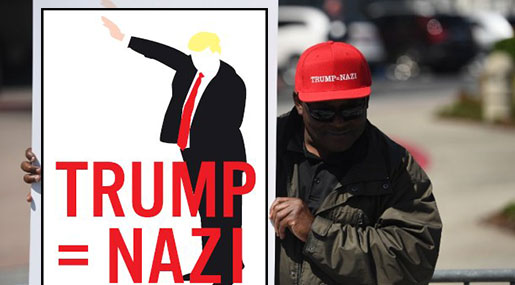 Protesters -- some of whom wore bandanas over their faces and carried Mexican flags -- blocked off the road in front of the Hyatt Regency here, forcing the GOP front-runner's motorcade to pull over along a concrete median outside the hotel's back entrance. Trump and his entourage got out and walked into the building.

"That was not the easiest entrance I've ever made," Trump said once he began speaking at the convention, adding, "it felt like I was crossing the border."

At one point before Trump arrived, about two dozen protesters tried to rush barriers near the hotel. Police officers then rushed to the building's doors, successfully blocking the protesters from getting in. Some of the doors' handles were handcuffed from the inside so they couldn't be forced open.

After Trump arrived, protesters took down a barrier and flooded the entrance outside the hotel, where police again blocked them from entering. They chanted, "Get him out."

Burlingame Police Lt. Jay Kiely said later Friday that five people were arrested, including one who was with the crowd when it tried to rush the Hyatt's entrance. One injury was reported, but Kiely did not know whether it was a police officer, protester or supporter who was hurt or the extent of the injury.

Kiely estimated the crowd was in the hundreds, though he did not have a precise figure and did not know how many police officers were dispatched to the scene. He also praised the "incredible restraint" shown by authorities.

Protesters have disrupted Trump's rallies across the country for months, but have rarely escalated into mass street demonstrations. Many protests have focused on Trump's rhetoric on illegal immigration.

Meanwhile, inside the hotel, a few dozen convention-goers and journalists watched the chaotic scene through the front windows, but otherwise most people hardly noticed.

Instead, they perused convention exhibits or waited in line for the luncheon. Even as a group of police in riot gear suddenly sprinted through a long hallway, people continued to go about their business.

Earlier Friday, bare-breasted protesters, men and women, some of whom were associated with the progressive group Code Pink, chanted "stop hate" as they marched.

The protests follow a rowdy scene Thursday night outside Trump's rally in Costa Mesa, California, where several scuffles broke out between protesters and Trump supporters. At least one police car was damaged and one Trump supporter was visibly bloodied after being punched in the face.

About 20 people were arrested Thursday night, police said.
In his speech at the convention, Trump predicted the primary season would soon come to a close and called for Republicans to come together, stressing, "there has to be unity in our party."

But, he made sure to note, he could still win in November even if he fails to unite the party.

"Could I win without it? I think so, to be honest, I think so," he said. High-profile Republicans such as Jeb Bush, he continued, may not support him in the general, but he brushed that off as a minor issue. "Big deal, like I care. OK?"

As he wrapped up his speech, Trump again mentioned the protests outside and the lengths to which he had to go to be there Friday afternoon.

"You have no idea the route they have planned for me to get out of here," Trump said.