A Bahraini court on Wednesday sent the activist Zainab al-Khawaja to two months in jail under the pretext of finding her guilty of destroying property belonging to the Interior Ministry, a judicial source said. 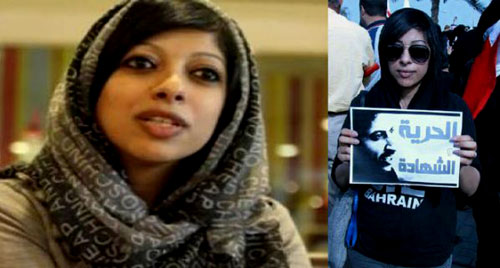 Zainab, daughter of prominent jailed opposition activist Abdulhadi al-Khawaja who is serving a life sentence after he was convicted, had been released in May after serving a one month jail term for allegedly attacking a policewoman at a demonstration.

She had also paid a 200 dinars ($530) fine for having insulted a police officer.
Zainab is also facing two other cases - obstructing traffic on a main road as well as taking part in a gathering and inciting hatred against the regime - for which she will be tried in November, the judicial source told AFP.
Al-Khawaja has been active in holding anti-government protests.
Meanwhile, the Bahraini regime series of attacking peaceful protests continue.
According to al-Wefaq opposition group, the security forces raided more than 8 houses, and vandalized private belongings.
"The number of vandalized cars by the forces totaled to 22," the party said in its statement.

It further noted that "five citizens were arrested extra judicially amid the crackdown on peaceful pro-democracy protests that took place in several areas around the country."
In parallel, the forces used birdshot (internationally prohibited shotgun) against protesters, alongside the heavy use of toxic tear.
Al-Wefaq has documented a large number of asphyxiation cases due to the repeated attacks in densely populated areas.
A number of injuries caused by the direct targeting with tear gas canisters have also been documented.

However, despite the ongoing suppression of freedoms, the demonstrations went on in many areas across the country.
People demonstrated in solidarity with the prisoners of conscience and their families, and demanded that they be released immediately.