The Qatari opposition declared for the first time its responsibility of actions inside the country. 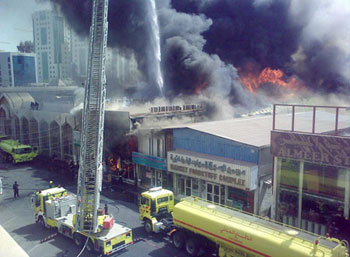 The so-called "al-Haq" (The Right) opposition group announced responsibility for the fire that broke out in one of the major malls in Doha Last Monday.
In a statement published by the Qatari Revolution "Face book" page, the spokesman for the leadership of the Supreme Military Council for "al-Haq", Abu Habib Anzi announced Wednesday that "the battalion has carried out a qualitative operation in one of the most important economic facilities in Doha."

"We targeted the Villagio Mall that is frequently visited by the Americans, their agents, and servants of al-Kahlifa Bin al-Thani," Anzi said.
He added that " the operation came as a response to what he viewed as targeting the Arab people in sake of the US-"Israeli" project aimed at destroying and sabotaging the Arab nation by the thieves of the country: al-Khalifa and their followers."

Anzi named the operation as "Thar Allah" (God's Revenge) and noted that "it led to the destruction of the whole mall in the presence of members of the ruling family, their bodyguards, and elements of the US occupation."
"The fire is not the result of an electricity problem," the man said and challenged the Qatari authorities to broadcast the live images of rescue operations, the collapse of walls, and pictures of the victims.

""Al-Haq" Brigades won't not calm down or rest until victory is achieved," he vowed as he declared responsibility for operations in the Villagio mall, City Center, Aviation College, and Fatima Bint Walid School.