Iranian House Speaker Ali Larijani warned Wednesday the US and the Zionist regime of war mongering measures in Syria. 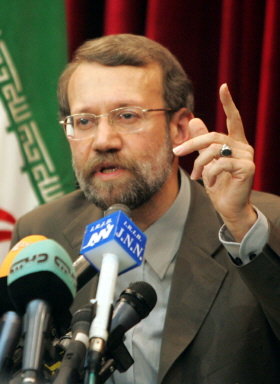 "The beginning of such adventurism might seem easy but the ending will certainly be very harsh for them," Larijani stressed.
The Iranian top official commented on recent remarks of certain western officials, including Americans, on Syria by saying: "they are seeking to pave the way for a new crisis."

He also stressed that "the US military officials are most probably suffering from an illusion regarding regional issues."
Larijani further highlighted the fact that Syria is in no way comparable to Libya, stressing that plots to create another Benghazi will certainly burn down the Zionist regime into ashes.
As the Iranian Speaker questioned the absence of any move to end the military occupation of Bahrain, he wondered "why do the foreigners keep supplying money and equipment to Syria and do not allow things to go through their usual procedure?"

"The present Democrat president of the United States is seemingly repeating the same mistake the former US president Jimmy Carter made," he added.
Larijani reiterated his country's support for democratic reforms in Syria which could meet the demands of its nation. He also condemned the opportunistic interventions of certain countries in Syria as well as the unwise terrorist operations by the United States there.