"Towards al-Quds (Jerusalem)" was their slogan, and so was their true dignified path.

They are the free people who chose to walk in the path of right; carrying nothing but the weapons of justice, liberty and freedom.
The world witnessed how last week people gathered in several Arab cities to mark the anniversary of the Palestinian "Land Day", which became an international day with "The Global March to al-Quds (Jerusalem)."

Among the figures taking part in the march in Lebanon was Pakistani activist Sabir Karbalai, member of the Palestine Foundation of Pakistan, and who is aware of the priceless value of the sacred sanctities.
Karbalai is a PHD student at Pakistan's Karachi University, and his major research is specialized in the Middle East affairs, especially in light of the latest international wars against it.

In an interview with moqawama.org, he indicated that his organization, Palestine Foundation of Pakistan, took part in the Global March to al-Quds (Jerusalem) in good faith to stress the true stance with the Palestinian cause.
Karbalai indicated that the Palestine Foundation of Palestine was established by students at the Karachi University almost 4 years ago, after the 2008-2009 "Israeli" aggression on Gaza.
The Pakistani activist noted that the some 36 Pakistani activists who participated in the Global March to al-Quds (Jerusalem) started their march on March 14, as they met with other activists in Malaysia, India, Iran, until they came to Lebanon.

"We finally came to Lebanon to participate in the global gathering in the Shakif Fort in the South, to show solidarity with the Palestinians against the "Israeli" occupation and practices," Sabir Karbalai stated.
On this level, he asserted that "through this global march, we tend to make all Palestinian national days international, like international al-Quds (Jerusalem) day and now the Land Day."
Karbalai went 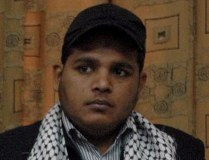 on to say that the global march to al-Quds (Jerusalem) boosts the international concern regarding the Palestinian cause, amid escalating Judaizing schemes.
"Before, when I was still a child, my father used to tell me that Inshalla (God Willing) al-Quds (Jerusalem) and all of Palestine will be freed," Karbalai indicated.
"Today, after all activists and movements taking part in the global march, the equation changed and became; we will free Palestine," he further added, with reference to the perseverance of the international anti-"Israeli" activists.
On his second visit to Lebanon, the Pakistani activist praised Lebanon's experience in resisting the "Israeli" occupation.
"Lebanon is strong, and its people are great. They were able to defeat the "Israeli" occupation in a defiant way," Sabir Karbalai reiterated.
"The 2000 and 2006 victories of Hizbullah in Lebanon are an example of the anti-"Israel" resistance, as should happen in Palestine," he asserted.

Moreover, he indicated that the people of Palestine should walk on the path of resistance like the Lebanese people, especially Hizbullah, did in order to defeat the enemy and liberate their land from the occupation.

Let the weak voices rise with outstanding echoes filling the world chanting "Free Palestine We Shall".